After weeks of terse negotiations between top Minnesota lawmakers over a possible special session of the Legislature, Gov. Mark Dayton decided to call up Kurt Daudt on the Fourth of July.

Over the phone, Dayton invited the Republican speaker of the Minnesota House to a one-on-one lunch at his residence on Summit Avenue in St. Paul, without the television cameras and the press standing watch. The next day, they munched on BLTs and cleared the air about some major disagreements still standing in the way of the governor calling lawmakers back to take care of unfinished business.

The progress made in that meeting was apparent Friday, when top leaders emerged from more formal negotiations to say they’d all like to call a special session sometime in the third week of August.

“I think we made some real progress that day, and I think that’s why you heard us having tones of cooperation and optimism that we would actually get a special session,” Daudt said after the meeting. “Sometimes it’s good to get away from the pressure of the media and just have a conversation.”

Friday’s was the first productive meeting — lasting more than two hours — that the governor and leaders have had since regular session ended on May 23. Back then, a nearly $1 billion bonding bill and package of one-time cash transportation projects blew up in the final moments of session over a disagreement about whether to include light rail transit funding in the package. A week later, Dayton vetoed a $260 million tax bill over a drafting error related to bingo halls that could cost the state $100 million over the next three years.

In their meeting Friday, Dayton agreed to drop most of a long list of demands he made in May in order to call special session. That list included $182 million in new bonding projects and nearly $80 million in new spending over the next year. Instead, Dayton said he will get funding to complete construction on the St. Peter campus of the Minnesota Security Hospital and other funds to upgrade the state’s sex offender treatment program in the bonding bill. Top leaders also agreed to re-pass the tax bill without major changes, other than fixing the drafting error that led to Dayton’s veto in the first place.

“Where there’s a will there’s a way, and the will is there, I believe, to work these final details out and have a special session,” Dayton said after the meeting.

But despite their tones of cooperation, there are still a few big hurdles standing in the way of a special session. The biggest hurdle is whether some kind of funding mechanism for light rail transit projects should be included in a negotiated special-session deal. Daudt said Republicans were still opposed to that project as of Friday and legislators needed input from “people outside this building” on the issue. 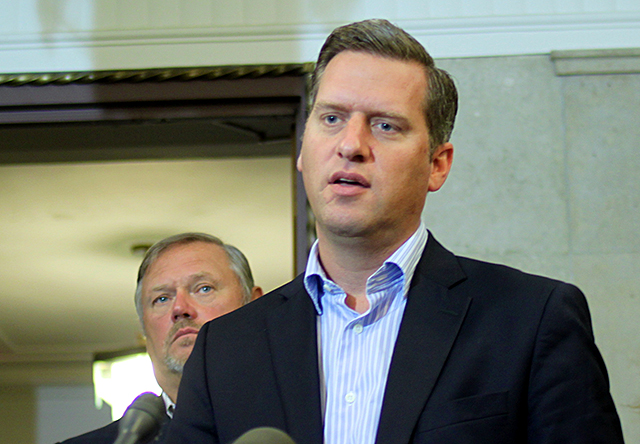 MinnPost photo by Briana Bierschbach
House Speaker Kurt Daudt: “Sometimes it’s good to get away from the pressure of the media and just have a conversation.”

DFL Senate Majority Leader Tom Bakk said he sees a possible resolution yet on light rail and plans to talk to metro-area counties about possible funding options to keep federal money for the Southwest Light Rail Line project from going to other projects around the nation.

Lawmakers still haven’t set a total dollar figure for the bonding bill, which Republicans would like to keep under $1 billion. “If it’s too large you lose votes, if it’s too small you lose votes,” Daudt said, noting the complicated process of crafting and passing a bonding bill.

The two legislative minority leaders, DFL Rep. Paul Thissen and GOP Sen. David Hann, were not at Friday’s meeting. Their agreement on the terms of a special session is required before Dayton will call lawmakers back.

The special session will also be logistically challenging. The Capitol complex is closed down in the midst of a restoration project, and the State Office Building down the street flooded this week and is undergoing repairs. Lawmakers could hold a special session in an all-new office building for senators on the north side of the Capitol.

Daudt and Dayton will be traveling over the next two weeks, but Bakk said legislative committees will meet to work out the fine details of the bonding and tax bill, as well as possible remedies to the state’s pension bill, which Dayton vetoed. 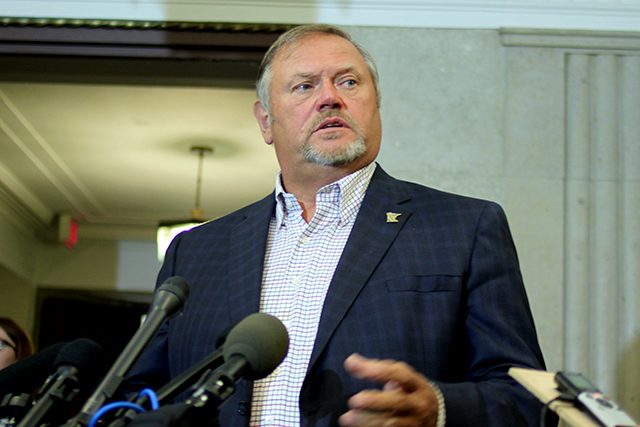 “I think in principle, it’s going to come together,” he said. Dayton agreed.

“It’s the first time, really, since the end of the regular session really that I believe a special session is very doable,” Dayton said. “There’s shared willingness to do everything possible to achieve that.”