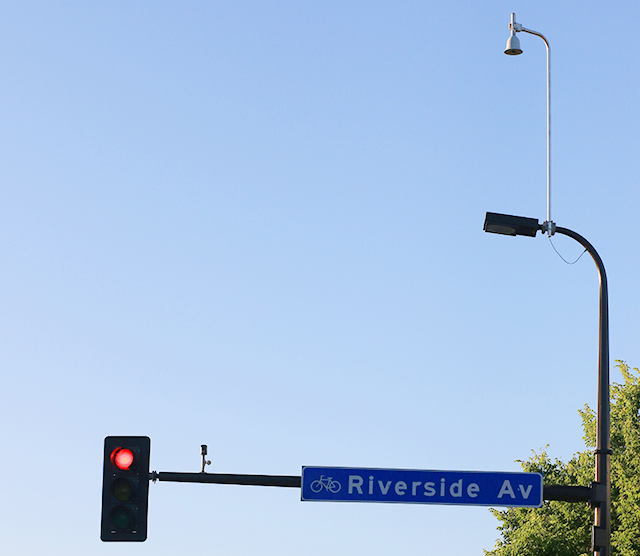 MinnPost photo by Greta Kaul
A Minneapolis Police Department camera is shown atop a street sign in the Cedar-Riverside neighborhood.

There’s a geographic square in North Minneapolis where not much can enter or leave without getting caught on video.

Bordered on the north by Lowry Avenue, on the east by Lyndale, on the south by Golden Valley Road/W. Broadway Avenue and on the west by Penn Avenue, the area has a Minneapolis Police Department camera at nearly every intersection. The department has nearly 200 cameras mounted on utility poles throughout the city and has access to dozens more owned by other levels of government and private parties.

Using responses to a Data Practices Act request made as part of a collaboration with Public Record Media, MinnPost plotted the locations of police cameras in both Minneapolis and St. Paul to create a visualization of the use of cameras by the two departments.

“We were trying to get a comprehensive picture of the live-video surveillance footprint in the Twin Cities, given the advent of new technologies such as artificial intelligence programs that can monitor live video feeds,” said Matt Ehling, founder and president of PRM. While the two departments did deliver camera locations, two other parts of the request did not produce a response. PRM requested from both cities all data detailing the rationale for camera locations. And Minneapolis was asked for private camera locations it has access to via a contract with a locally based company called Securonet.

Neither city produced data about the rationale for camera placements, although Minneapolis described the process in an interview. And Minneapolis said it does not have the locations of the Securonet cameras (more on that below).

Neither city is completely covered, so the camera placements also pinpoint areas the two police departments consider to have issues with crime rates or are high use — the West 7th corridor in St. Paul and Nicollet Mall in Minneapolis, for example. Minneapolis also used federal grants secured with the help of the Coast Guard to install cameras near the Mississippi River, especially on river bridges.

But the North Minneapolis quadrangle is the most striking once camera locations are plotted.

“They tend to be on high-traffic commercial areas,” said Lt. Jeff Rugel with the department’s Strategic Information and Crime Analysis Division that contains the strategic information center. “They are primarily on busy thoroughfares because if you’re taking video you want to be able to see lots of cars, lots of people, lots of activity.”

The department does have real-time access to cameras placed in the city by the Minneapolis Park & Recreation Board, such as the network that keeps watch over the Midtown Greenway.

An early video system was capable of working with the city’s ShotSpotter system — a network of microphones that pick up the sounds of gunfire and help calculate where in the city they originated. Rugel said the system automatically directed nearby cameras to point at the same spot. That ability, however, was “the only good thing about that system,” Rugel said. “Everything else was really clunky.” The department is working with its current video vendor to regain that capability, he said.

St. Paul police installed their first cameras in 2008, when 83 were mounted. Another 79 were installed in 2010, with a handful added in most years since. There are now 191 cameras in the St. Paul video system. In the data released by the St. Paul police, some cameras carry a notation that they are either fixed or “PTZ” which stands for the capability to pan, tilt and zoom.

The maps above show only cameras that are owned by their respective cities’ police departments. Minneapolis also released a copy of its contract with Securonet to take part in what the Minneapolis-based company calls its SafeLink program. The system allows owners of private security cameras to sign up to provide a quicker way for the city to get copies of video after an incident occurs. But the department does not have real-time access to those cameras or those recordings and still must make requests on an incident-by-incident basis, and detectives still physically visit the business to pick up copies of video recordings, Rugel said.

In response to the DPA request made by Public Record Media, the department said it did not have data showing which businesses and which cameras are registered with Securonet.