With her or not, here she comes: on Thursday night, Hillary Clinton accepted the Democratic Party’s nomination for president.

A week after a fractious Republican Party nominated Donald Trump as their presidential nominee, Democrats’ own divisions were on display as the 1,894 delegates pledged to Sen. Bernie Sanders grudgingly accepted Clinton’s nomination — or didn’t at all — making their presence known with chants, boos, sit-ins and all manner of Sanders paraphernalia.

Minnesota Democrats — the majority of whom support Sanders, and vocally so — sat perched right above the convention floor, and their elected officials often played a central roles on stage during the week’s proceedings.

As Democrats march, not totally unified, into a general election against the most unconventional major party candidate in recent memory, what did we learn from a long, sweltering week in Philadelphia?

The convention audience heard a whole lot from Minnesotans over the course of the week: at the DNC, five Minnesotans — Gov. Mark Dayton, Sens. Al Franken and Amy Klobuchar, Rep. Keith Ellison, and State Rep. Peggy Flanagan — spoke on the main stage.

At each of the past two conventions, only one Minnesota Democrat addressed the gathering. Former Minneapolis mayor R.T. Rybak spoke in 2012 in Charlotte and Klobuchar did in 2008 in Denver.

In Philadelphia, Franken and Klobuchar got prime, standalone speaking spots on Monday and Tuesday nights, respectively. Ellison was called up on Monday night to introduce Sanders ahead of his keynote address to the convention on Monday.

Dayton and Flanagan both got bite-sized stints on the convention stage on Thursday. Flanagan, the 36-year-old freshman DFL state representative and longtime organizer, framed her speech as an open letter to her daughter.

Flanagan, who is a member of the White Earth Band of Ojibwe, invoked the historic potential of electing Clinton as the first woman president, and hit back against Trump’s pejorative use of “Pocahontas” to describe Sen. Elizabeth Warren, who has Native American ancestry.

It was hardly a prime slot, and swaths of the arena were empty, so Flanagan likely won’t get an Obama-like star turn out of this appearance. But it’s not every state legislator who gets to speak at a national convention, and Flanagan’s selection as a speaker is indicative of the potential some Democratic leaders see in her.

In a brief speech, Dayton — who recalled arriving to the Senate with Clinton in 2000 — praised Clinton’s work on healthcare issues and criticized Trump as someone who has “stepped on others just to climb a little higher himself.”

While Dayton, who endorsed Obama in 2008, is hardly a riveting public speaker — and probably won’t be a top Clinton surrogate — his criticisms of Trump were notable for how aggressive they were.

Franken-watchers know the drill: yes, Minnesota’s junior senator has kept a low profile since arriving in the Senate in 2008. The former comedian seemingly swapped out one-liners with wonky one-page amendment summaries.

Fresh off a convincing re-election win in 2014, Franken’s getting back to his roots, playing a more active role in electoral politics and, yes, telling a few more jokes.

In a roughly seven-minute speech, Franken introduced himself as a “world-renowned expert in right-wing megalomania” and launched into a critique of Trump, framed through the lens of Trump University, the failed, Trump-backed degree-granting institution that some former students called a scheme — saddling them with high debt loads and few benefits.

The crowd received his routine well. “Did you know that Trump University’s school of ripping people off is ranked second in the nation?” he asked, drawing laughs. “Right behind Bernie Madoff U.”

Afterward, Franken appeared onstage for a back-and-forth with comedian Sarah Silverman. It was awkward at points, the political equivalent of an awards show presentation.

But it unexpectedly produced one of the biggest lines of the week: as they stalled ahead of a performance from Paul Simon, Silverman said that the so-called “Bernie or Bust” faction was being “ridiculous,” prompting a roar from Clinton supporters.

Franken’s routine might not have been as biting as it was at this year’s MinnRoast — where he pilloried Sen. Ted Cruz as the “lovechild of Joseph McCarthy and Dracula” — but it was good enough. Expect to see him reprise this role on the campaign trail during the general election.

3. Klobuchar spends a serious moment in the spotlight

Klobuchar got perhaps the choicest spot of any Minnesotan, addressing the convention in the peak of primetime, at around nine p.m. on Tuesday night, just an hour before Bill Clinton would take the stage.

Not just anyone gets a prime-time speaking slot at the convention, and it’s a sign of the substantial role that Klobuchar is expected to play, and has already played, as a surrogate for Clinton.

In her six-and-a-half minute address, Minnesota’s senior senator focused on human trafficking — something that is a top issue for her — and made the case that Clinton would, as president, be a strong advocate for women and girls at home and abroad.

Clinton, Klobuchar said, “sees a world where girls are not captured and sold, but are fearless and bold, where they lead and not follow, and where someone tells a young woman, ‘you fight like a girl,” her answer is, ‘Yes, I do, and I’m proud to be that girl!’” 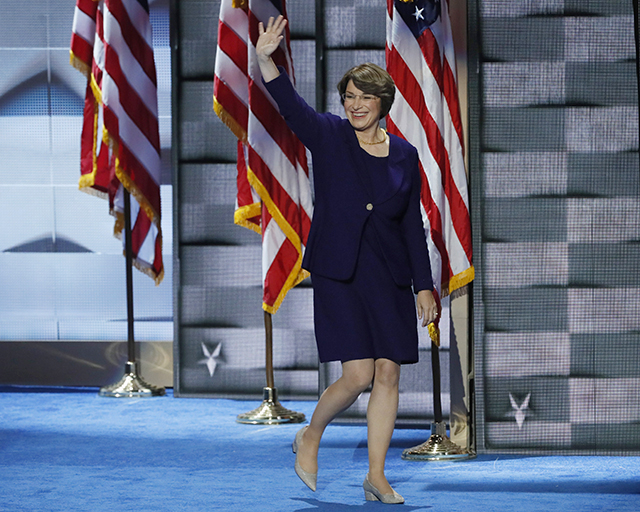 It was a serious speech with tough subject matter, underscored by the story of Ima Matul, a sex trafficking survivor who joined Klobuchar on stage to speak. But some national pundits, like the Washington Post’s Chris Cillizza, panned Klobuchar’s delivery, saying her address was flat and that she has more work to do.

Klobuchar made a second appearance onstage on Thursday evening, coming onstage with 11 of her female Senate Democratic colleagues, and praised Clinton’s work to help secure adoptions of Haitian children after that country’s earthquake in 2010.

“She got those babies home. That’s Hillary,” Klobuchar said.

4. The Bern: still very much felt

Democrats gawked at the dysfunction that was on display at the GOP convention in Cleveland. But they walked into a powder keg of their own at the gathering in Philadelphia.

The set-up couldn’t have been worse for Sanders followers: the Friday before the convention, Clinton selected the moderate Virginia Sen. Tim Kaine as her running-mate, angering progressives who wanted a kindred spirit in the veep slot, like Sen. Elizabeth Warren.

Compounding that, on the eve of the convention, hacked emails were released that showed Democratic Party officials conspiring against Sanders, forcing the resignation of the party chair, Rep. Debbie Wasserman Schultz.

The very first mention of Clinton’s name was met by boos from some of the Sanders faithful, many of whom arrived wearing Sanders campaign paraphernalia.

The mood mellowed over the course of the week, but on Tuesday and Wednesday, Sanders supporters staged walk-outs, protests, and, at one point, conducted a sit-in inside the media tent.

In the Minnesota delegation — where Sanders supporters are a majority — supporters of the “political revolution” were on very different stages of acceptance of their candidate’s defeat. Most were ready, or signaled they eventually would be ready, to back the nominee. At least one delegate who spoke to MinnPost will not vote for Clinton.

Many also expressed a deep distrust of Clinton and questioned if she would follow through on policy promises, like her vow to oppose the Trans-Pacific Partnership trade pact. The grassroots plans to keep up pressure on her, the kind of pressure that forced her to the left on TPP in the first place.

They will be watching closely for signs that Clinton not only wants their support — but needs it.

Ellison was slated to speak on the convention stage earlier Monday evening but was, on the day of, tapped to introduce Sanders before his big address Monday night.

After the anti-Clinton displays earlier in the day, Ellison had a delicate balance to pull off: emphasizing the need to support Clinton while properly teeing up Sanders’ speech and a recognition of his achievements.

On stage, the Minneapolis congressman touted the Democratic platform as the “most progressive in history” and said “that’s the platform that we can make the law of the land if we stand together.”

But he drew the biggest cheers for declaring himself “a proud Bernie Sanders supporter” and when he said “Bernie sparked the beginning of a revolution, y’all.”

Ellison spent the week going around to state delegation breakfasts, offering the same message of party unity and progressive achievement.

As one of the few high-profile elected Sanders supporters, Ellison could become a valuable asset to the Clinton campaign if it is planning a serious effort to win over skeptical progressives.

6. In the shadow of Sanders, corporate America still influential

Corporate involvement in DNC proceedings got some interesting scrutiny this year.

Sanders’ invective against Wall Street and big business — and the mainstreaming of those viewpoints in the Democratic Party — offered plenty of opportunities to underscore how intertwined the Democratic establishment remains with corporate America, even if major party figures praise his campaign’s message.

As revealing reports — like this one in the Los Angeles Times — detailed, convention-goers streamed into the Wells Fargo Arena with lanyards bearing the logos of AT&T and Comcast, and corporations spend lavishly on events at hotels and high-end restaurants to provide opportunities for their lobbyists to have access to lawmakers and party insiders.

Minnesota’s delegates, to be sure, were not sipping champagne and nibbling on caviar all week. But they were invited to enjoy plentiful free food and drink at events throughout the week, thanks to companies like Delta, Microsoft, the kidney health company DaVita, and Cargill.

It all provided a sharp contrast with the GOP convention, where many big-name corporate sponsors, like Coca-Cola and Visa, withdrew out of concern of being associated with Trump. Minnesota-based UnitedHealth Group withdrew a half-million dollar commitment.

Correction: This article has been corrected to accurately reflect the number of senators onstage with Klobuchar.

Six takeaways from the Democratic National Convention in Philadelphia