First elected to the state House at 23 years old, Metzen represented his South St. Paul district for 42 years, eventually moving up to the state Senate, where he served nine terms and as chairman of several committees, including the prominent Commerce Committee.

Metzen, a banker by trade, was known for his old-school lawmaking style and ability to work with both sides of the aisle to pass legislation in St. Paul. Senators elected him president of the chamber, where he served from 2003 until 2011, when Republicans briefly regained control of the chamber. Statements poured in Tuesday morning from both Democratic and Republican colleagues mourning Metzen’s passing.

“Jim embodied the legislator that I think many of us strive to be like. He didn’t allow partisanship to cloud his judgment of somebody,” DFL Senate Majority Leader Tom Bakk, who was close with Metzen, said in a statement Tuesday morning. “If you were a good person, then you were well respected by Jim.”

“With the passing of Sen. Metzen, the Minnesota Senate lost a great leader and my colleagues and I lost a good friend,” Republican Minority Leader David Hann said in a statement. “Jim was a true public servant who fought tirelessly for the people of South St. Paul and his entire district. His quick wit and natural charm often defused the partisanship of the Senate and helped us focus on what is important — improving people’s lives.” 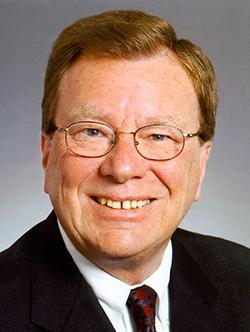 Metzen was also a fierce advocate of his South St. Paul district, critical in the redevelopment of a landfill near the Mississippi River that was reopened as Kaposia Landing in 2008, with miles of paved trails and a dog park. A former hockey player, Metzen was a staunch supporter of the Mighty Ducks youth hockey program, which was named after the longtime senator last session.

“Jim’s constituents and colleagues will remember him for his world view, which proved that by working together, we can accomplish anything,” DFL Party Chairman Ken Martin said in a statement.

Metzen announced in January that he would not seek a 10th term to the Legislature. He is survived by his wife, Sandie, and two sons.

State Sen. Jim Metzen dies at 72; is remembered as a defuser of partisanship