The Capri Theater on West Broadway has seen its share of history, including Prince’s first solo shows in 1979 and performances by Charlie Chaplin, Barbara Stanwyck and the St. Paul Chamber Orchestra. Tuesday night’s history was made at a Neighborhoods Organizing For Change (NOC)-sponsored forum on black America featuring Green Party presidential candidate Jill Stein, when the gathered 200 came together to form a coalition around the seemingly disparate issues of reparations, police brutality, student debt, the environment, the $15 minimum wage, workers’ rights, Islamophobia, legal marijuana, and the adverse economic and environmental effect of corporations on neighborhoods.

Not to put too fine a point on it, but in a presidential election season that has too often been lacking in original ideas, the forum was a refreshing crash course on what ails us all, and a grass-roots affirmation that people have the power. Ironically enough, at the same time that Donald Trump was on all three major cable news channels, the much lesser-known Stein could be seen only via the live Unicorn Riot stream.

“We are all immigrants, except for Native Americans and African-Americans, who were forced to come here for slavery,” said Stein, to cheers. “We say to Donald Trump that we don’t need a fricking wall, we need to stop invading other countries.”

The Stein event was the second NOC-organized presidential forum to take place this year. Bernie Sanders accepted the group’s invitation and spoke at a NOC forum in February, while Hillary Clinton has been extended but not yet accepted the invitation.

“In the past, it’s been easy for presidential candidates to ignore us, but not anymore,” NOC Executive Director Anthony Newby told the enthusiastic crowd. “How many people agree that we should have a genuine discussion about other parties beyond Democrat and Republican? Those parties have existed for a long time, there’s a lot of benefits in each of those things, but as we’ve heard today there is a real appetite in the country and certainly in the black community to walk a different path and test new waters.”

“The American people are in revolt,” said Stein. “And they deserve to know there are other choices. When other countries say there are only one or two official parties and all the others should go home and be quiet, we call that tyranny. That’s not democracy, and let me just add that we can change our voting system right now to a system that is actually used here in the Twin Cities: rank choice voting. But we’re not doing that. Why aren’t we doing that?

“The first time I ran for office, which was for governor against Mitt Romney in Massachussetts many years ago, we went to the legislature and said, ‘Here is this bill. We are filing rank-choice voting so there will be no splitting of the vote. We had a Democratic legislature that could’ve passed it in the blink of an eye but they wouldn’t let it out of committee. Sixteen years later they still won’t let it out of committee because they are not your friends and they know that if you have the choice you won’t vote for them. They do not deserve your vote.”

Stein, a 66-year-old Harvard-educated doctor and activist, sat at a table with Newby and a panel of educators, students, and activists. The first topic of the night was reparations. “Are you OK with saying the word ‘reparations,’ and if so, what does it mean to you?” Newby asked Stein.

“I think I’m the only presidential candidate out there that is advocating for reparations,” she said. “This issue of police violence is really just a tip of an iceberg. This is a crisis that needs to be fixed in and of itself, but in order to fix this crisis, we have to fix the surrounding crisis that it’s a part of. Police violence is just one dimension of the violence of racism and white supremacy that is grown into the culture and the economy. Going back historically, the Emancipation Proclamation was not the end of the story, as you know.”

As Trump talked law and order, Stein dreamed a dream of a kinder and gentler cop.

“The current model of policing, which you could call ‘broken windows’ policing, aggressive and militarized policing, it is a totally failed model of policing,” said Stein. “It doesn’t work and it should be dismantled. We need policing that is supportive of and not seeking to dominate and exercise violence over the community. I am just beginning to learn about alternative models, and I appreciate the work NOC has done to build up alternative models.

“In many countries around the world, police do not carry guns and they and the community are much safer. You can look at the community of Richmond, California, which actually was run by a Green mayor, Mayor Gail McLaughlin and a very progressive city council, where they adopted a new way of policing, where they wanted the police to look like the community, and live in the community, and be a part of the community. They instructed police in de-escalation techniques and nonviolent tactics and working with social workers and mental health workers they reduced to practically zero the deaths caused by police.” 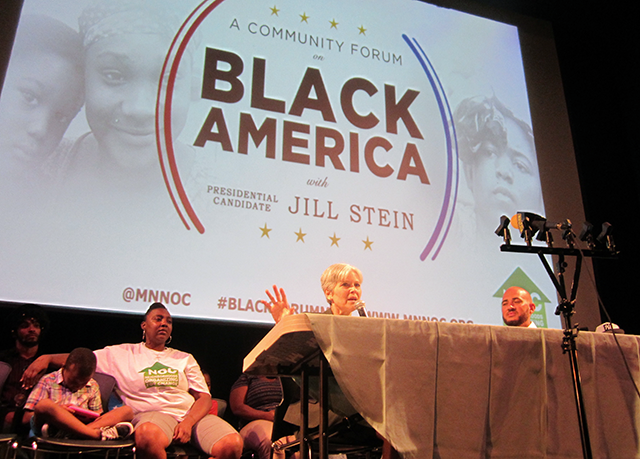 Over the course of the two-hour program, the names of Trayvon Martin, Jamar Clark, and Philando Castile were invoked, and many of the attendees wore Black Lives Matter T-shirts.

“We need to put our communities back in control of their police rather than having police control their communities,” said Stein. “So that means every community has a civilian review board with the power of subpoena, the power to hire and fire, the power to investigate, and every community has access to independent investigators who are not connected to the police department, so that every case of death or injury at the hands of police is investigated as a matter of routine not ruled by an act of God from the Department of Justice in order to find out what happened and ensure that justice is done.”

Along with economic and racial justice and the disparities between black and white income and equity, one of Stein’s recurring themes was the lack of opportunity for African-Americans and what forgiving the student debt would mean to people of color.

“Bail out the student debt of this country the way the government bailed out the banks, and this country would thrive,” she said. “We need to liberate the younger generation, which always leads the way forward. That 1.3 trillion [student] debt is largely held by the federal government, and the Federal Reserve can buy that debt and then they can essentially cancel it. In doing that, they’re not burdening taxpayers, they’re basically expanding the money supply and putting the money into the younger generation who spend it into the economy and that benefits everybody. It’s a stimulus package.

“To make college free, we did this. Following the second world war with the G.I. Bill, returning soldiers had free college and for every taxpayer dollar that went into it, we got seven back in return. That’s the plan. We can do this. We cannot afford not to do this.”

“We’re a powerful force here,” Stein concluded. “Like Alice Walker says, ‘The biggest way people give up power is by not knowing we have it to start with.’ We should not have to compromise. The 1 percent is just 1 percent. We are the 99 and they’re going to have to compromise for a change.”

“We need a world and an America that we can live in, because right now it’s rapidly self-destructing, and I will do my part to transform this America and this world that works for all of us, based on democracy, justice, peace, and putting people planet and peace over profit.”