It started with bird-safe glass. And then it got complicated.

Minneapolis Council Members Cam Gordon and Linea Palmisano thought the city could do something to help the birds who crash into the city’s myriad skyways. The same design standards that call for the bridges to be transparent for safety reasons, it turns out, also make them invisible to birds.

Bird-safe glass, Gordon and Palmisano figured, might reduce the death toll. But the council members slowly discovered that regulating the type of glass in skyways — or anything in the city’s skyways — wasn’t as easy as it seemed.

That’s because Minneapolis has a peculiar means of regulating its ubiquitous skyway system. That is, it mostly doesn’t. The design and signage and hours are determined by a quasi-private entity made up of building owners and skyway users called the Skyway Advisory Committee. To do anything with the skyways, the city gets the committee’s approval before it issues an encroachment permit via the public works department.

“It’s the same type of permit you’d need for a temporary impairment, like for a dumpster,” said Palmisano, except that it’s permanent. And while a new building needs to go through extensive city review, the skybridges aren’t part of such examinations.

To impose design standards for bird-safe glass on skyways, then, the city would either have to add a separate review and approval process — or take over the entire skyway review system.

“We didn’t quite realize all we were chomping off with this,” Palmisano said.

Minneapolis has a very different structure for overseeing skyways than St. Paul. In the capital city, skyways are built and owned by the city. Private building owners that want to be part of the system are required to give the city a legal easement through the interiors. Those easements allow the city to strictly regulate the skyways, including setting the hours of operation.

In Minneapolis, the system developed differently, with building owners creating the system without city easements. The skyways are privately built, and the city has not demanded any control or compensation in exchange for encroachment over city rights of way, nor are skyway hours uniform or enforced. And while skyways are not universally loved — some blame them for lackluster streetscapes downtown — others defend them as necessary during winter and desireable during summer. Minneapolis even brags that its skyway system is the world’s largest contiguous system.

Past Minneapolis councils authorized the Skyway Advisory Committee to review and approve proposals. The 19 members are appointed by the Minneapolis Downtown Council, subject to ratification by the city council.

Council Member Lisa Goodman, whose ward covers much of downtown, said the advisory committee predates her nearly 20-year tenure on the council, but that she understands the thinking behind it — that those who own and operate the skyways would be better at making sure it runs as a system. “It’s important that everyone follow the same rules and hours,” she said. The advisory committee “allowed those who invested in the skyway to apply peer pressure on others who invested in the system. Peer pressure would work better than city regulation,” she said.

Under a plan being put forward by Palmisano and Gordon, however, the city would not only create new bird-safe glass requirements for new and revamped skyways, it would take over the skyway design review work now done by the Skyway Advisory Committee. Rather than the committee reviewing skyway designs before a permit is issued, the city zoning administrator would do the work.

Steve Cramer, president of the Minneapolis Downtown Council, which administers the advisory committee, said he has been talking to Gordon and Palmisano about their ideas.

He said the change from advisory committee regulation of the system to city administration could work as long as the city is willing to be flexible. “It’s the difference between what has been a slightly less formal process to becoming a more-formal process,” Cramer said. The city, for example, could withhold the permits needed to cross over a public street if the design standards are not met. That would give the proposed system “more teeth,” he said.

Sometimes a proposed skybridge can’t meet some standards because of physical constraints of a building site, said Cramer. Still, he said, he isn’t “sensing any opposition boiling up over this change.”

Two issues that could be addressed by the ordinance is hours and access. The current system asks buildings to remain open until 10 p.m. weeknights, until 8 p.m. on Saturdays and 6 p.m. on Sundays. They also are supposed to have well-marked entrances and proper signage to make it easier for pedestrians to get from the street into the skyway system.

Despite those standards, some building owners close earlier or open later than the hours set by the advisory committee, and many do not meet the requirement for well-marked access points. 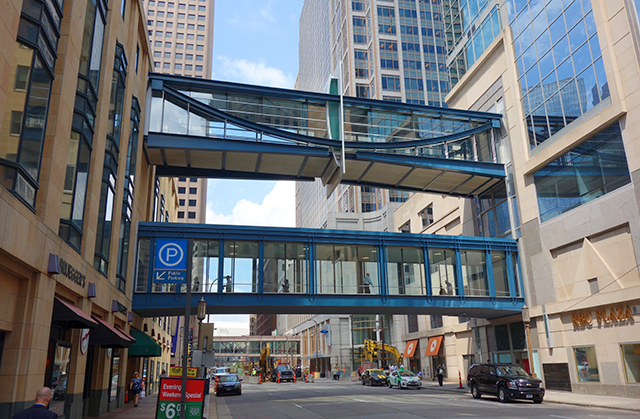 MinnPost photo by Peter Callaghan
A draft ordinance being considered in Minneapolis would include standards that only single story skybridges be permitted and only at the second-floor level. This double bridge crosses over South 6th Street from Gaviidae Common.

Cramer said the downtown council, along with Meet Minneapolis and the Building Owners and Management Association, have been sponsoring meetings to talk about making the skyway system work better for visitors and tourists. That could include better signage and “wayfinding” — perhaps including a phone app — as well as having more-uniform and longer hours of operation.

But access from the street remains a difficult issue. Initial designs for the renovated Nicollet Mall had prominent stairways from the street to the skyway bridges. Those were taken out of the final design because of objections from adjacent buildings owners.

“Some building owners, because of security issues, aren’t anxious for there to be widely known access points through their lobbies up to a 2nd floor skyway,” Cramer said. “Others aren’t interested in being a portal from the street up to the skyway. That’s one of the barriers to making it better known.”

Working on these types of issues could provide a reason to maintain the advisory committee even if its design review function is shifted to the city, he said.

But about those birds …

Cramer has also brought in building owners, developers, architects and members of the Minnesota Audubon Society to talk about bird-safe glass and changes to how skyways are regulated.

As per bird-safe glass requirements, Cramer said there has not been loud objections. Since they would not be applied retroactively but only with new skyways or when existing glass is replaced, he said the cost would be incremental. “Nobody is running around with their hair on fire on that,” Cramer said.

In fact, Palminsano said that the issue that led her and Gordon to initially look at skyway regulation — bird deaths — appears to be the easiest to resolve.

She said she expects to have enough votes on the council to require bird-safe glass for new skyways and whenever existing glass is replaced. Cramer said he doesn’t expect much opposition from building owners and developers.

The Minnesota Audubon Society says that skyway glass can present several problems that confuse flying birds. They can reflect habitat and sky, they can appear to be a pass-through, and they glow at night due to interior lighting in a way that attracts migrating birds. The group recommends that transparent materials not be used, suggesting translucent or decorative glazing. If clear panels are used, it advise the incorporation of surface treatments to make it visible to birds.

While the current skyway advisory committee standards call for clear glass “for the purpose of maintaining security within the Skyway System,” the proposed ordinance will call for 85 percent of the glazing to meet the bird-safe glazing definition. The could include a combination of physical structure and visible glass patterns, such as horizontal or vertical lines of dot patterns.