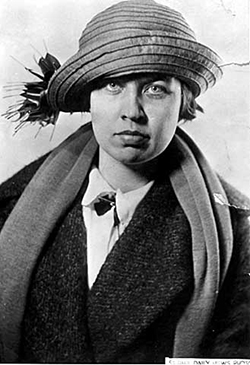 Courtesy of the Minnesota Historical Society
Myrtle A. Cain, one of the first women ever elected to the Minnesota House, was known as the “flapper legislator.”

Regardless of political persuasion, it’s hard not to feel a little like it’s the end of an era with last week’s primary election defeat of Rep. Phyllis Kahn, who is tied for the longest-serving legislator in Minnesota history.

Minnesota has changed a lot since Kahn was first elected. So has the statehouse she’s spent 44 years working in. For one thing, there are a lot more women there today.

Kahn was one of six women elected to the Minnesota House of Representatives in 1972 (five were newly elected and one, Helen McMillan, had served since 1963). It was the first time women really gained a lasting foothold in the Minnesota legislature.

“Those six constituted a still-deep minority in the 201-member Legislature. Yet their arrival was hailed as a breakthrough from which there would be no turning back,” Star Tribune columnist Lori Sturdevant wrote in 2012, calling 1972 the “Year of the Woman.”

Here’s a look at the history of women at Minnesota’s State Capitol before and since.

"It was historic when we were elected,” Kahn told Minnesota Public Radio in an interview last week. “That was the headline in the newspaper in 1972: the women are taking over. And we looked at it and we were stunned, because there were a total of six of us. And we thought, how can we take over we don't even know each other?"

Kahn assumed office at a time when, across the U.S., more women were beginning to be elected to serve in state legislatures, said Jean Sinzdak, associate director of the Center for American Women in Politics at Rutgers University.

When Kahn took office in 1973, just over 6 percent of legislators in U.S. states were women, according to the Center for Women in American Politics, which has been tracking women in state politics since the 1970s.

It was a time of change in the United States, Sinzdak said. And some of those changes — the women’s movement and the civil rights movement in particular — probably helped more women seek and succeed in being elected to public office.

“The fight for civil rights raised people's awareness of political power and what it meant to get it,” she said.

There was a steady increase in the share of women serving in U.S. state legislatures through the 1980s and 1990s, but that percentage has since plateaued around 25 percent.

Share of legislative seats held by women, 1971-2015
The share of women in U.S. state legislatures rose steadily from the 1970s to the early 2000s, when it began to level off.
Source: Center for American Women and Politics

“Unfortunately, we’ve plateaued around a quarter and we’ve not been able to make any dramatic strides since then,” Sinzdak said.

Minority women make up just 5 percent of all state legislators in the U.S.

Sue Metzger Hough, a member of the Republican Party (legislators were elected in nonpartisan elections at the time but could be affiliated with parties), served one term representing Minneapolis from 1923-24. She unsuccessfully sought election to the House in four subsequent elections, according to the Minnesota Legislative Reference Library.

In 1923, she wrote a seven-page poem, “As One of Lady Members Four,” with stanzas about every legislator in the House — man and woman (except herself). MinnPost found it at the Minnesota Historical Society. (You can read the whole poem here.)

Just 28 at the time of her election, union advocate Myrtle Agnes Cain, of Minneapolis, was called the “flapper legislator,” according to Session Weekly. A member of the Farmer-Labor party, she also helped found the National Women’s Party’s Minnesota arm.

Cain was not at all a fan of the Ku Klux Klan, calling them “cowards, lawbreakers and criminals.” She famously authored the first bill that, targeting the Klan, made it a misdemeanor for people to hide their identity in public.  It became law and other states soon followed.

Hannah Jensen Kempfer, a former teacher, postmaster and general store operator from Otter Tail County, served in the Minnesota House as an independent from 1923 to 1930, and again from 1933 to 1942.

Mabeth Hurd Paige, affiliated with the Republican Party (but later rebuffed by it, according to the Legislative Reference Library), was a lawyer and business manager who represented Minneapolis in the House from 1923 to 1943. She was a charter member of the League of Minnesota Women Voters.

The four women legislators banded together “in support of a statute to erase the scarlet letter brand from the brow of the innocent little ones born out of wedlock” in Minnesota,” according to a 1923 article in the St. Petersburg, Florida Evening Independent. It would give children born out of wedlock the same rights as children born to married parents.

Today, Minnesota’s legislators are 34 percent female: 68 out of 201 seats in the House and Senate are held by women (there are 23 women in the Senate and 45 in the House).

That puts Minnesota fifth among states in terms of representation by women, according to the Center for American Women and Politics. Colorado, where the first women representatives were elected in 1894, leads the country, with 42 percent, and Wyoming comes in dead last, with just 13 percent.

Generally, states in the West  (and a few in the Northeast) tend to do the best when it comes to electing women, Sinzdak said, stressing that that “best” is relative when women still don’t make up 50 percent of legislators.

“At the time those legislatures were being formed, (it) was later than the eastern states. They didn’t have as deeply entrenched political systems,” she said. It might also have something to do with the fact that in those states’ pioneer settlement days, women and men worked side-by-side to survive and build cities, she said.

In southern states, women’s share of legislative seats tend to be the smallest, she said.

“A lot of that has to do with that the southern states have been much more culturally conservative overall,” she said. “It’s just been harder to break in.”

Jennifer DeJournett, the president of VOICES of Conservative Women, which aims to help elect “common sense, pocketbook women” to office, said that while the political atmosphere might be better for women in Minnesota than in some states, holding 34 percent of the legislature is not enough. Parity — on both sides of the aisle — would benefit everyone, she said.

“Women tend to be collaborative. When they get elected or want to run for something, they’re going to accomplish something. It’s usually not an ego trip, just another medal on the chest,” she said.

Both VOICES and Women Winning, which tends to endorse progressive candidates, work to get women elected to office in Minnesota.

Currently, 11 of 29 leadership positions in the Minnesota legislature are held by women, including House Majority Leader Joyce Peppin, a Republican, and Assistant Senate Majority Leader Katie Sieben, a DFLer.

“I’m hoping in my lifetime that … our leadership is just going to be so commonplace that people won’t even think it was anything different than that,” DeJournett said.