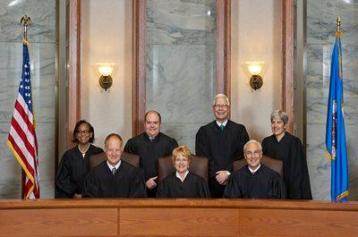 After gathering thousands of voter signatures, enduring rejection by the Minneapolis City Council and getting what turned out to be false hope from a district court judge, backers of a move to gradually increase the minimum wage to $15 will not get a vote this fall.

Neither will a proposal to require city police officers to buy their own liability insurance. That measure was previously rejected by the Hennepin County District Court.

The Minnesota Supreme Court issued a terse order Wednesday — a day after hearing oral arguments — that the City Council was legally justified in keeping the proposed charter amendment off the ballot. In reversing Hennepin County District Court Judge Susan Robiner’s ruling in favor of the amendment supporters, the justices relied on the city’s core argument. That is, the minimum wage was an ordinance and that the Minneapolis charter does not allow voters to place ordinances on the ballot by signature drives.

Further, what Robiner decided was non-binding court commentary from a decade-old appeals court decision — that city voters cannot offer up “an initiative cloaked as a charter amendment” — was given force of law by the Supreme Court.

The court issued the order quickly to give Hennepin County time to place — or in this case not place — the measure on the November ballot. The court said a full opinion on the legal issues will come later. Before the order came out in mid-afternoon, backers had demonstrated in City Council chambers demanding that the council order the city attorney to withdraw the appeal. A vote to amend the council’s Committee of the Whole agenda to take up the matter failed.

After voting two weeks ago not to place the measure on the ballot, the council directed staff to prepare an ordinance to increase the minimum wage with a majority of the members saying they would support a city-only wage that is higher than the statewide wage. That is not expected to come back to the council until next spring.

The police insurance issue was decided on different grounds. Because it dealt with city employees and city policies toward those employees it was considered a valid charter amendment. That is, it dealt with the form and functions of government itself.

The city argued — and both the district court and the Supreme Court agreed — that the proposal conflicts with state law that requires the city to defend and indemnify its employees. The city also argued the state preempts any local action on the general topic.

“We conclude that the district court correctly decided that the proposed liability insurance amendment is preempted by state law and, therefore, is improper and cannot be included in the Minneapolis City Charter,” the Supreme Court order stated.