When people ask Phyllis Kahn if she’s in the toughest election battle of her political career, she reminds them of her very first run for office in 1972.

At the time, she was busy testing DNA samples at the University of Minnesota as a researcher, and there was only one woman serving in the entire state Legislature. Despite the odds, Kahn won a Minneapolis House seat that year. She’s been serving in the area ever since.

But after 44 years in office, Kahn is now facing two candidates in the Aug. 9 primary who are arguing it’s time for some new blood — and ideas — in House District 60B. For some, it’s a persuasive argument: Newcomer DFL candidate Ilhan Omar nearly secured the backing of local Democrats in an April endorsing convention. But after five ballots, neither Omar, Kahn or a third candidate, Mohamud Noor, earned enough support to walk away with the party’s endorsement.

Instead, all three candidates are making their pitches directly to voters in the district, which covers the University of Minnesota campus, Prospect Park, Cedar Riverside, Marcy-Holmes and Seward neighborhoods.

The candidates have blanketed those neighborhoods with their signs and campaign literature, sometimes twice over. With less than a week to go before the primary — for which most are predicting low turnout — the personal connections they make on the campaign trail could tip the scales in the closely watched race.

MinnPost went out door-knocking with Kahn, Omar and Noor in the final weeks of the campaign to hear what they’re telling voters they will do for the district — and what voters are telling the candidates they want.

On a recent Thursday, Kahn knocked on a door in Melbourne Street in the Prospect Park neighborhood, the first of the night. On the other side of the door she found a house divided.

The husband supported Kahn, but his wife was still undecided between Kahn and Omar. While hesitant to say whom she was leaning toward in the race, the voter did note that she’s written to Kahn many times over the years about various issues at the Legislature, including the construction of a new Vikings stadium.

“You wrote me back,” she told Kahn. “You helped me decide how I felt about the issue.”

Kahn thanked the couple for their time and asked for their votes in the primary, before moving on to the next house. It was 96 degrees in Minneapolis but felt more like 106 degrees with the humidity. Still, 79-year-old Kahn marched up step after step to knock on doors. She’s faced tough primary battles before, and the experienced door-knocker cut confidently through gardens and across voters’ lawns to get from door to door fastest.

On top of the oppressive heat, Kahn was met with the usual challenges of retail campaigning: no-soliciting signs on doors, barking dogs or people cooking dinner and uninterested in her pitch. In most cases, people just weren’t around.

“I thought more people would be home today because it’s so awful outside,” Kahn said.

This is Kahn’s old home turf. She used to live in Prospect Park, just east of the University of Minnesota campus, before moving to Nicollet Island in the 1990s. Many of the yards already had “Vote Kahn” signs sticking out near the sidewalks. But there were Omar signs in the neighborhood too, and Kahn quietly took note of each one on her clipboard, writing “Ilhan” next to the address.

The day wasn’t a total loss. At every door where no one answered, Kahn tucked her flier under the door or between the frame and handle, usually with a handwritten note. The front of the flier featured an overhead shot of Kahn on her hand-made kayak paddling along the Mississippi River. On the back it talks about her accomplishments in St. Paul, including environmental work on Minnesota’s renewable energy standard, college tuition freezes, cracking down on bad payday lending practices and pushing for gun control laws.

Like most of Kahn’s material, it also makes some mention of her trailblazing years as a Yale-trained scientist. That background comes up in a conversation with a young man who answers his door at one house. She’s one of less than two-dozen legislators in America who are also scientists, Kahn said, which the young voter said he appreciates.

“I do have one question,” he said. “Is there a seniority system? I guess what I’m asking is, does it hurt us to kick you out?”

“Yes,” Kahn quickly responds. It’s something she usually points out voters. “I serve on three finance committees. You don’t just end up there in your first term.”

At 11:12 a.m. on Friday, Ilhan Omar got out of her car and disappeared into a Seward neighborhood house, where her campaign chair, David Gilbert-Pederson, has lived since he was a child.

Ten minutes later, the pair came out with a list of potential voters and took on the shaded pavements in the neighborhood for another day of door-knocking. “I’ve been door-knocking daily,” she said. “Today, we’ll visit people that I already spoke with on the phone … or people I have met briefly.”

This quiet neighborhood is one of several areas in the city that have become a battleground in the race. The look of some houses in the neighborhood revealed that the candidates have already done their homework: Campaign signs — for Omar and Kahn, mostly — were placed on the lawns.

But the residents that Omar visited on Friday had no signs. That could mean they are undecided. Or it could mean they haven’t heard from a particular candidate. And that was the reason Omar wanted to persuade them to join her side.

But since most of the residents didn’t answer the door, Omar left handwritten notes. One of them read: “Sorry to have missed you today. Looking forward to the opportunity to talk with about your priorities for our district.”

But not all of the residents were away. One man opened his door to speak to Omar. He was undecided, and wanted to hear what Omar had to say on the issues. “In the last 20 years, we have had tuition rise,” she told him. “That’s a huge priority for a lot of our young people in the district.” She promised to make college education affordable for Minnesotans. 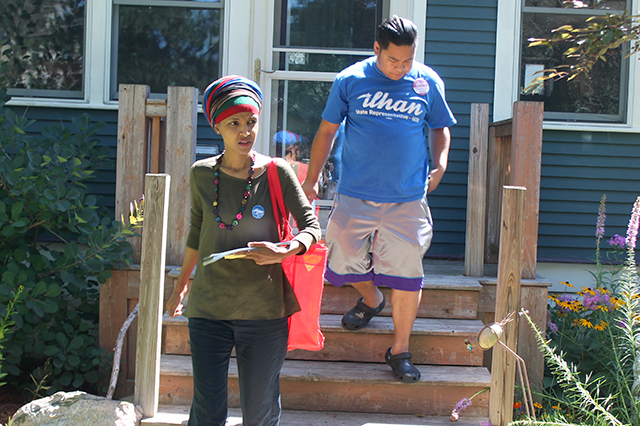 The man listened to Omar as she continued to talk about closing the achievement gap between black and white students. “I’m a product of the Minneapolis Public Schools and have three young children in the system,” said Omar, adding that she will work on creating “wrap-around services” for the students, if elected.

Then, the man interrupted: “Were you born in the U.S.?”

Omar was born in Somalia. When she was 8, civil war erupted in the East African country, causing her and her family to seek shelter in a refugee camp in Kenya. Four years later, Omar moved to the United States. Today, she is a U.S. citizen, a mother of three and a policy director at the Women Organizing Women Network, which empowers immigrant women by providing leadership training and engaging them in politics.

So she told the man she came to the United States at age 12.

“You can’t be a president!” he told her.

“No,” she said, laughing. “But my children can. My daughter is planning to.”

On a recent Wednesday, he was going door to door on Nicollet Island, a close-knit community nestled in the Mississippi River just north of downtown Minneapolis. It also happens to be where Kahn has lived for decades — a fact not lost on the other island dwellers.

“You’re in Phyllis Kahn territory. She’s my neighbor,” said a man walking up to his flat on Grove Street. “What will you do differently?”

Noor launched into his stump speech, which he trimmed down to a 30-second pitch. Kahn has been a good legislator for the past 44 years, he said, but it’s time for new blood. As a former Minneapolis School Board member, his top priority is equal access to early and affordable higher education for everyone.

He hands the man his brochure, which goes into more detail about other issues, including economic development, and his plan to tackle the state’s deep racial disparities. He also talks about access to affordable health care for everyone, citing his 14 years of experience working in social services for Hennepin County and the state.

“The big question we get asked is, ‘Why not Phyllis?’” Noor said. “Because she’s the incumbent.” 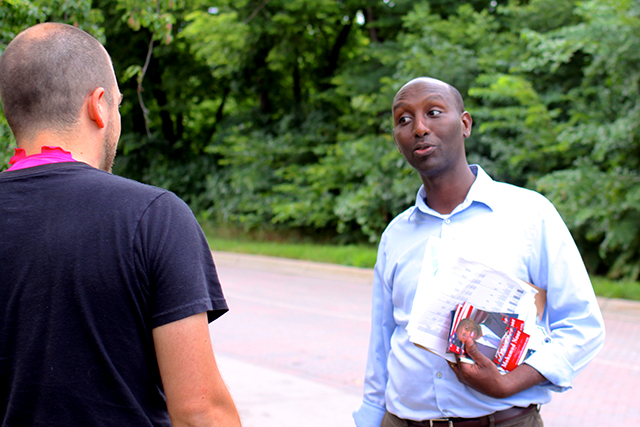 Noor charges from door to door quickly, not fazed by the “Vote Kahn” signs in every other yard in the neighborhood. His mission is to make sure every potential primary voter in the district knows his name, or better yet, has a face-to-face interaction with him. Noor remembered many of the voters from knocking on their door during his primary race against Kahn in 2014, when he lost to Kahn by less than 400 votes.

“I want to make sure everyone sees my face,” he said. “I’ve door-knocked the whole district, corner-to-corner.”

With each voter he meets, Noor reminds them that the primary is on Aug. 9, but that they can also cast their vote early through the state’s no excuse absentee balloting, which his campaign is closely tracking. So far, well over 1,000 ballots have been cast, and, according to Noor’s calculations, most of those early votes are for him. Noor came in third place in the April endorsing contest, but in a likely low-turnout August primary, he’s confident he can get his supporters out through early voting.

“No other campaign is watching these early votes like we are,” Noor said.

Looking at the list of names, one of the volunteers accompanying Noor that day, Shukri Salad, a recent high school graduate, pointed out that Kahn lives on the island. “Yes, I’ll let you knock on her door,” Noor said laughing.

Salad and another volunteer knocked on Kahn’s door, but she didn’t answer.

So they left her a Noor brochure.

By Ibrahim Hirsi and Briana Bierschbach