It was hard for Karin Housley to ignore the fact that her four children, who range from ages 19 to 29, were constantly sending “snaps.”

That’s shorthand for a photo message — usually accompanied with caption, doodle or one of many filters — sent over the popular app Snapchat. The app has about 150 million daily active users, which is nothing compared to the 750 million people who use Facebook everyday, but its audience is growing quickly. In June, Snapchat surpassed Twitter in daily users.

Housley, a first-term Republican state senator representing the eastern suburbs, saw an opportunity. She thought the temporary, rapid-fire nature of snaps, which disappear after someone views it, is the perfect communicating tool for a campaign. With a little research, she and a group of campaign interns figured out they could create their own Snapchat filter to coincide with a certain event, like the upcoming Washington County Fair. It cost them $600 to create the filter — it uses the same design as her campaign signs — and they made it available to anyone with the app attending the fair. In the end, the filter was used 700 times and got over 12,000 views in just a few hours.

“I think I got good bang for my 600 bucks,” Housley said. “And I got a little addicted to Snapchat in the process.”

Housley’s efforts are just one example of how candidates and parties are trying to adapt to a rapidly changing campaign landscape, especially when it comes to the use of technology and social media.

Today, many people don’t have landline phones or cable subscriptions, so the usual tools employed to reach voters — phone banking or television ad buys — are far less effective than they once were. Young voters in particular — those between the ages of 18 and 29, an important if elusive block of the electorate — interact almost exclusively with their peers online or through their phones, on everything from Snapchat and Facebook to Twitter, Instagram and Vine.

So instead of just creating targeted ads this cycle, candidates and political parties are now looking to utilize so-called social media “influencers,” people who have thousands of followers and elicit plenty of likes, interactions and shared content. By enticing influencers to share campaign content, thousands can see campaign ads right in their own feeds, brought to them by their friends, family and co-workers. 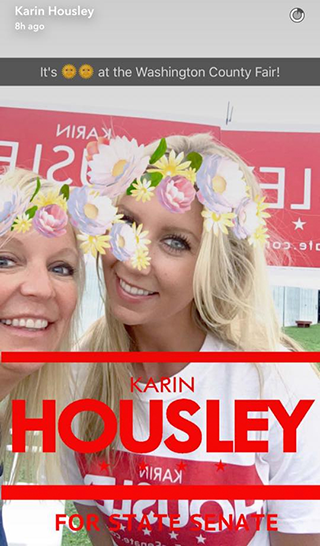 Courtesy of Karin Housley for State Senate
Karin Housley’s Snapchat filter in use at the Washington
County Fair.

“Social network validation of candidates and messages is so important. It’s friends and family saying something or passing on important information,” Republican Party of Minnesota Chairman Keith Downey said. “That brings an extra degree of credibility. That is who people look to in the final weeks when they are thinking of who to vote for, who are my friends and family, and my co-workers say they are voting for?”

And new opportunities to reach voters can emerge suddenly. Pokémon Go, a location-based game where players walk around with their phones, was released right after the Fourth of July holiday and already has topped Twitter in daily users. The game also sees people spending more time in its app than in Facebook, and campaigns have been scrambling to find ways to harness its viral power.

“By the time a candidate or a party figures out how to take advantage of a new social media platform, it could be obsolete and people are on to something else,” Downey said.

DFL state Sen. Terri Bonoff, who is running in Minnesota’s 3rd Congressional District this fall, used Pokémon Go to entice young volunteers to come door knocking. Bonoff staff set up a lure — a feature used in the game to draw players to a specific location — to bring volunteers to her campaign office. From there, they went out door-knocking across the suburban congressional district, catching Pokémon along the way.

“One of the things I’ve been surprised by is how many young people want to work on the campaign,” Bonoff said. “They just need that extra push. There is an understanding that I’m already with them on the issues they care about, things like freedom to marry, climate change and gun control.”

Social media and data technology in campaigns has come a long way since the dawn of the internet.

The first ever campaign websites emerged two decades ago in the 1996 presidential race between Bill Clinton and Bob Dole. With the advent of email, campaigns were able to put people’s names on fundraising lists, which was a lot cheaper than mail. Today, campaigns have so much data on voters that they not only know a voter’s political leanings, but what restaurants they like and what kind of car they drive.

“People would be amazed at how much data we have on voters,” DFL Party Chairman Ken Martin said. “Data is the currency of modern political campaigns.”

That data is especially critical in Minnesota, where voters don’t have to register with a particular political party. That means parties spend tons of money and resources to figure out who is a likely Democratic or Republican voter to better target their ads, mailers and human resources. The DFL Party of Minnesota was the first party in the nation to have a computerized voter file, and for many years, it was the largest database in the country. In 2004, the Democratic National Committee created a national voter file that brought all state data together. 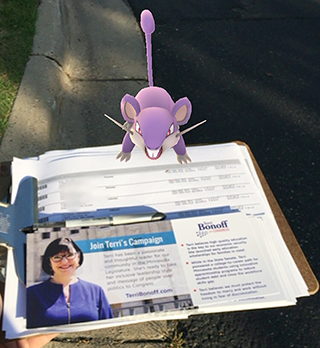 To illustrate the importance of solid voter data, Martin pointed to this summer’s Republican primary in Minnesota’s 2nd Congressional District, in which he lives. Martin — not exactly a likely GOP voter — received mail from all four candidates running in the race.

“Clearly [the Republicans] weren’t targeting,” he said. “They were wasting their money sending these to me. You only have limited resources. You can’t be sending mail to the DFL Party chairman.”

Republican Party Chairman Keith Downey acknowledges the DFL has the advantage in social media and data infrastructure, but he says the Minnesota GOP has also spent the two years since the last election catching up.

And both chairs agree that, while it’s important to use social media and data to magnify messages and effectively target resources, it’s easy to be distracted by the latest campaign app or social media strategy. Local races are still won on grassroots campaigning and face-to-face interactions. “People are tuning those other messages out and looking for more real conversations about the issues and candidates,” Martin said.

He pointed to the 2012 campaign to defeat a constitutional amendment to ban gay marriage. That worked, he said, partially because the opposing campaign took its time having conversations with voters, hitting the same doors multiple times.

“That’s where our campaigns are heading, having multiple conversations over many months,” he added. “It can’t just be one-time and transactional.”