Two different groups of Minneapolis residents had an idea to amend the city charter. Both gathered enough signatures to put the issue before voters in November. And both saw their efforts thwarted by a City Council.

But the two groups might end up with two very different outcomes.

Last week, after hours of oral argument, Hennepin County District Court Judge Susan M. Robiner overturned the council’s vote on a proposed amendment seeking to increase the minimum wage in the city to $15, ruling that it could be put on the ballot.

But the other proposed amendment — the one that would have required city police officers to carry their own personal liability insurance — didn’t pass muster with Robiner. (Both orders have been appealed to the state Supreme Court and will be argued this week.)

In short, Robiner was more convinced by the city’s arguments on the insurance issue that she was on its claims about minimum wage. So why the different outcomes? Why did Robiner side with the charter backers on the minimum wage — but not on police liability insurance?

Keeping amendments off the ballot: a primer

To understand the judge’s different decisions, it helps to know a little about city charters in Minnesota. The state constitution permits cities to create home rule charters, which allow for more independence in how municipalities operate. It also requires that residents be allowed to amend those charters if they collect signatures equal to 5 percent of registered voters.

But gathering those signatures isn’t a guarantee of a proposed amendment getting on the ballot. The City Council of a charter city must determine whether the measure is legal, for one thing. And if it’s not, the council is supposed to keep it off the ballot, according to legal advice provided to the Minneapolis City Council by City Attorney Susan Segal.

Preemption was problem with the proposed police insurance amendment, which is sponsored by the Committee for Professional Policing. As proposed, the measure would require each Minneapolis police officer to purchase professional liability insurance, which would be the officer’s primary insurance and include “coverage for willful and malicious acts and acts outside the scope of the officer’s employment by the city.” The city could choose to reimburse the officer for the costs of basic insurance but the officer would be responsible for any premium increases that result from “personal or claims history.”

The rationale for the proposal is that police officers who must pay out of pocket for higher premiums would be more careful about taking certain actions, especially using excessive force that could result in damage claims or civil suits. Ultimately, an officer with multiple claims could see his or her insurance canceled, making them ineligible for the job. 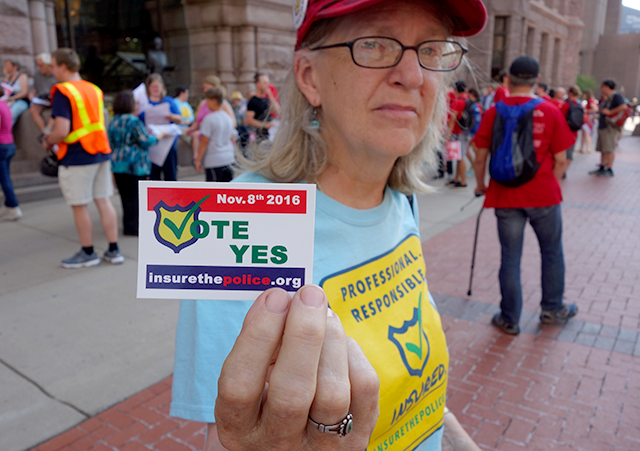 MinnPost photo by Peter Callaghan
Janet Nye outside city hall prior to the Aug. 3 Minneapolis City Council vote to deny the charter amendment on police liability insurance a place on the November ballot.

The city’s argument wasn’t that the measure was unconstitutional. Segal, the city attorney, did assert — and the Minneapolis council agreed — that the amendment conflicts with a state law that requires each city to defend and indemnify city employees against all claims. Segal also argued that the city is obligated to provide coverage under its contract with the union, which represents most police officers. A contract bargained in good faith can’t be changed by ordinance or charter amendment.

Robiner agreed with that position. She denied the request to order the county to place the measure on the ballot, determining that the police insurance measure not only conflicts with state law but is also preempted by the state.

To invalidate the amendment, Robiner needed only find that it ran afoul of one of three areas of pre-emption: field preemption, which occurs when the state has passed so much legislation on a given topic that it has acted to “occupy the field”; express preemption, when the Legislature has explicitly stated in statute that an issue is no one’s business but the state’s; and conflict preemption, when a proposal conflicts with state law.

Robiner found that the proposed amendment actually violated all three. She found “a strong argument for field preemption” because “the subject matter, i.e. who shall be financially responsible for claims made against city police officers, is the subject of extensive regulations.” But she also found express preemption in the state’s indemnification and defense statutes, which “are exclusive of and supercede all home rule charter provisions and special laws on the same subject.” Finally, Robiner wrote, “Even if field or express preemption did not operate to void the proposal, conflict preemption would.”

“By mandating that the officer’s insurance be ‘primary,’ the proposal assures that the injured party would look to the officer’s professional liability coverage first for recovery,” the judge wrote. “This result conflicts with the city’s obligation to completely indemnify the officer.”

How slaughterhouses relate to the minimum wage

One argument the city didn’t make against the proposed police insurance amendment is that it isn’t a proper subject for the city charter. But the issue of what is a topic for the charter — and what is best reserved for a simple city ordinance — is at the heart of the arguments for and against the measure to increase the citywide minimum wage to $15.

Segal argued that the minimum wage measure, sponsored by the group $15 Now Minnesota, is beyond the scope of a charter amendment because it doesn’t deal with the form and function of city government — in essence, that the issues should be addressed via an ordinance.

Yet the Minneapolis charter does not provide for the introduction of ordinances by citizen initiative; ordinances are a function only of the City Council. Any minimum wage measure, therefore, would have to start with the council. (In fact, the City Council began a process for considering a local minimum wage ordinance after it rejected the charter amendment.)

The city’s position is that to create a minimum wage by popular vote, activists would have to engage in a two-step process: First, they would have to gather signatures for charter amendment to give citizens initiative powers; and then use that power in a second petition drive to create the city-only minimum wage.

In ruling that the amendment can go forward, however, Robiner wrote that she considered the city’s interpretation of the scope of its charter to be overly narrow. If the city charter, and charters across the state, were in fact limited to mundane acts of government and the activities of agencies, the city’s position would have carried more weight. But city charters in Minnesota do not.

For example, the Minneapolis City Charter, noted the judge, “regulates private persons in their private affairs: e.g. the charter contains detailed regulations regarding the sale of liquor … .”

And in response to an argument by the city that liquor regulation has a special place in state law, Robiner noted that the charter “also mandates that ‘slaughterhouses may not exist in the city’ unless approved by a supermajority of the council.”

During oral arguments, Robiner questioned why state law and constitution would limit the subject matter of charter amendments to government form and function. “Why would the constitution bother to give citizens the right to amend the charter if that right is so skinny?”

An ‘attaboy’ or case law?

In her order allowing the minimum wage amendment to be put on the ballot, Robiner wrote that “the city cannot locate any Minnesota case law that creates the distinction that it urges between the proper subjects of initiative and referendum legislation and the proper subject of charter legislation.”

The city thought it had just such a case, decided just a decade ago. In Haumant v. Griffin, the appeals court agreed with a district court order that the city was right in not placing on the ballot of charter amendment legalizing medical marijuana.

In that decision, the appeals court wrote that “while appellant failed to directly address this issue, the district court’s finding that ‘the proposed charter amendment is an initiative cloaked as a charter amendment’ has merit … .”

But minimum wage amendment backers argued that while the district court judge in the Haumant case spent a lot of time and ink going into the argument that residents cannot use charter amendments to adopt ordinances, the appeals court made only passing reference to it — at the end of a decision that was decided on other grounds. The basis for the decision in Haumant, $15 Now Minnesota attorney Bruce Nestor told Robiner, was that state and federal law preempted the medical marijuana issue.

Robiner expressed sympathy for Nestor’s assertion, agreeing that the ordinance-disguised-as-a-charter amendment line was at the end of the ruling and lacked citations to previous court rulings. “It might have just been an attaboy to the district court,” she said.

In her written order, Robiner wrote: “This court concludes that Haumant, on its own, does not bar the proposed charter amendment.”

Robiner found that none of the reasons set in state law for blocking a charter amendment on police liability insurance was present in the case of the minimum wage. “To reject this proposal based on its content somehow being improper, which the city urges, amounts to passing judgment on the quality of the proposal, which is not the province of the court,” she wrote.

Both of Robiner’s orders have been appealed to the state Supreme Court and will be argued this week. Decisions on both measures are expected soon as Hennepin County is nearing the end of its timeline for preparing ballots.