What’s a few percentage points between friends and colleagues?

In St. Paul city government, it’s quite a lot.

The city’s mayor, Chris Coleman, has asked the city council to set the maximum property tax levy 6.9 percent higher than what is being collected from property owners this year. But the majority on the council prefers an 8.6 percent hike — a difference that amounts to $1.8 million on a tax base of around $113 million.

All acknowledge the levy is high — higher than they’d wish — but necessary. And both blame the state Legislature for failing to convene a special session to reinstate a $3 million increase in local government aid that was set to be included in a tax bill.

For Coleman, that 6.9 percent is high but tolerable. But 8.6 percent is not. And on Wednesday, the confrontation will culminate with a meeting during which the city council will once again take up the levy ordinance — the last council meeting before the state’s deadline for setting the maximum levy amount.

And though it looks as if Coleman has enough votes on council to get his way, the episode raises another question: How did St. Paul reach this point? When all of the players are members of the same party, how is it they can disagree so completely on issues of taxing and spending?

It all started so well. Back in early August, Coleman presented his budget request for the city amid smiles and applause. While St. Paul had problems to address, revenue was projected to come in at levels high enough to allow the mayor to propose spending increases. He wanted to add five police officers and three police community outreach workers, create a Job Opportunity Fund targeted at small business investment and support an increased battle against Emerald Ash Borer.

But there was a hitch. In creating his budget, Coleman bet on comity between Gov. Mark Dayton and House Republican leaders in the Legislature, which would ensure that the increase in local government assistance (LGA) would flow to the city. That didn’t happen, as Dayton vetoed the bill that included the money (for reasons unrelated to LGA). And last week, the governor — finally, it appears — ended any hopes of convening a special session that would have presumably restored the money.

As a result, Coleman was forced to lay out cuts to cover that now-unavailable $3 million. Not only would all of the new spending he’d proposed in his budget address go away, other cuts to police, fire and libraries might be needed.

“A cuts-only approach to filling this $3 million gap… risks undermining our commitments to strengthening the middle class through equity, a focus on public safety and our longstanding practice of strategic investments that move our city forward,” Coleman wrote to the council members. Instead, he suggested adopting a maximum levy hike of 6.9 percent — rather than 4 percent, as he’d originally proposed — and working to find other solutions that could lead to a smaller hike come December.

All that sounded okay to the council when it met last week. But if going from 4 percent to 6.9 percent would help pay for all those commitments, members decided, why not go up to 8.6 percent?

Proposed by Council President Russ Stark, the higher amount would allow the city to not only replace that unrealized LGA increase, but also begin paying some other costs the city is expecting to see in the fire and parks departments. Since studies of both will be conducted next year, and everyone knows there will be unmet needs, it is better to begin meeting them sooner, not later, said Stark. 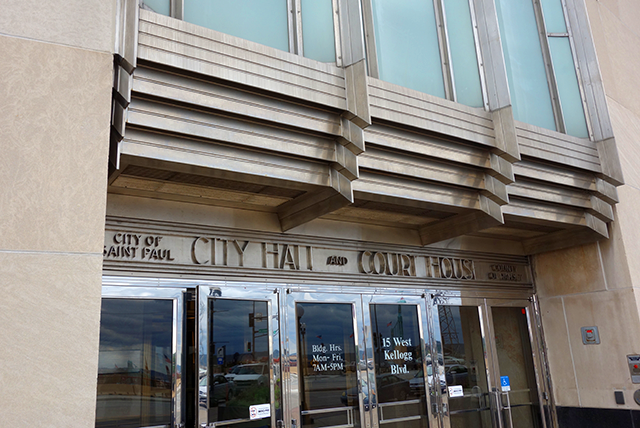 MinnPost photo by Peter Callaghan
State law sets parameters for what cities like St. Paul can do regarding the levy.

“During the election we heard a lot about the parks and what those needs are that haven’t been met,” Stark said. “It is always a balancing act between trying to meet those needs and trying to keep taxes reasonable,”

Council Member Jane Prince said her east St. Paul ward has been underfunded for years, resulting in shortages in library hours, rec center hours and parks equipment and facilities. “I need to do this,” she said of the higher levy increase.

And Council Member Rebecca Noecker said the council should act when the city is “booming.” “We’re doing really well right now and the only way to capture that is with a levy increase,” she said. “We talk about equity, but when we want to take a stab at it we’re told there are no funds.”

Silent during last week’s council discussion was Council Member Dai Thao. And when it came time to vote, he sided with Coleman, not his fellow council members, that 6.9 percent was high enough.

Stark’s higher amount still passed 4-3. But Thao’s surprising “no” vote — along with those of Council Members Chris Tolbert and Dan Bostrom — meant there wouldn’t be enough votes to override a Coleman veto.

That is, unless someone changed their mind.

As expected, Coleman vetoed the ordinance the next day. “The $3 million gap caused by the state’s inaction is already a tough pill to swallow,” the mayor wrote. “Going above the amount required to cover the budget I delivered in August is misguided.”

State law sets parameters for what cities like St. Paul can do regarding the levy. Setting the maximum levy must be done by the end of September. And though that number might not end up being the actual increase, it often is. Once budgets are completed by mid-December, the city approves the actual levy amount. St. Paul’s target — whether it’s 6.9 percent or 8.6 percent — is higher than Minneapolis (5.5 percent), Hennepin County (4.49 percent) or Ramsey County (2.8  percent).

But another provision of state law adds to the political intrigue. If a local government fails to set a maximum levy by September’s end, that government reverts to the amount currently collected. That means that without a signed ordinance, St. Paul would only be able to collect this year’s $106 million next year as well. By comparison, Coleman’s request is for $113 million and Stark’s proposal is $114.7. Both the mayor and the council majority, therefore, have an interest in setting a higher maximum levy since the budget problems would be markedly worse without one.

That sets up five possible results at Wednesday’s council meeting:

But while Stark is the leader of the council, Thao is the key vote on the issue. After last week’s meeting, he said he cast his vote against the higher levy because “I still feel it’s going to be hard-hitting to the folks in Frogtown,” a reference to the low-income neighborhood in his First Ward. “I’m cautious about it but I sure hope we can get in a room and talk this through.”

Thao, however, didn’t rule out being the fifth vote to override the Coleman veto.  “That could come,” Thao said. “I don’t want to say yes or no.”

After Coleman veto, a rare bit of intrigue over tax levy vote in St. Paul