Metro Transit can move into the final phases of planning for Southwest light rail, the 14.5 mile extension of the Green Line.

Thanks to votes Wednesday by the Counties Transit Improvement Board and the Met Council, and another by the Hennepin County Board the day before, the region now has legal commitments to pay half the cost of the $1.858 billion project. That will allow Metro Transit staff to submit an application to the Federal Transit Administration for final agreement on federal funding.

The actions taken this week are meant to show the FTA that there is money to fill out the state’s share of the costs. But in keeping with so much tied to the Southwest LRT project, it wasn’t easy. The recent moves became necessary after a transportation funding package failed in the politically divided state Legislature. The original hope — that the state would pick up 10 percent of the project budget, roughly the same share Minnesota paid for the existing Green and Blue lines — disappeared with the failure of Gov. Mark Dayton and fellow Democrats to reach a deal with House majority Republicans on a roads, bridges and mass transit.

“The governor said we’re down to two options,” Met Council Chair Adam Duininck said before the CTIB vote. “Either we’re doing the project or we’re not.”

A problematic message to lawmakers?

The complex funding mechanism resulted from meetings convened by Dayton. Under the plan unveiled last week, the Hennepin County Regional Rail Authority and CTIB will add $20.5 million to their existing share of the cost while the Met Council, which is overseeing the project, pledged to sell “certificates of participation” for the remainder of the $144.5 million gap. As a result, a funding plan that could once be explained with a simple pie chart containing four slices has become — first in response to cost increases that nearly killed the project last summer and now because of legislative gridlock — one with eight pieces.

Southwest LRT backers, led by Dayton, hope that the money raised this week isn’t necessary, that the next session of the Legislature will come up with the state’s 10 percent share. To that end, the certificates of participation won’t be sold until next July, with the additional money from Hennepin County and CTIB covering project costs until then. And the resolutions passed this week say the money will be repaid if the state provides other sources of money.

But that would likely require DFL candidates to win majorities in both the chambers of the Minnesota Legislature this November. GOP opposition to light rail has probably only stiffened with what some Republican lawmakers have called an end run around the Legislature and a breaking of a pledge not to move forward without legislative support.

The approval of CTIB was the most contentious of the recent votes. Made up of commissioners from five core metro counties — Hennepin, Ramsey, Anoka, Dakota and Washington — the CTIB board also represents a principle: that all will pay in and that all will, eventually, see service reach them. But without an increase in CTIB funding, either from the state or via a requested tripling of the quarter cent regional transit sales tax, few of the future projects — especially those serving suburban cities and East Metro — are likely to be built. 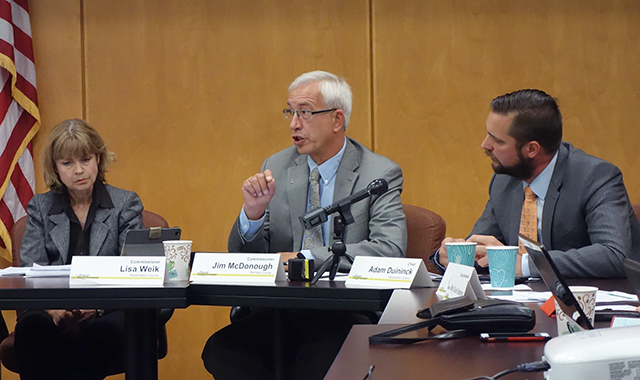 MinnPost photo by Peter Callaghan
Washington County Commissioner Lisa Weik, far left, said she was worried that if Southwest LRT fails now, the federal government will be leery of the state’s competence on transit projects.

Matt Look, an Anoka County commissioner and CTIB member, said the actions taken by the three entities send a message to lawmakers that the region can go it alone and doesn’t need state help. “That’s a problematic message, especially … when you’re talking about an increased sales tax,” Look said. “It’s going back to the Legislature and saying, ‘We somewhat disregarded you on this project but now we need a favor.’”

Look ultimately voted against the rescue package. But even several who voted yes did so with some fear that projects important to their counties might not get built.

Hennepin County Commissioner Mike Opat, for example, asked the other commissioners to do as much for the Blue Line extension to the northwest suburbs as they’ve done for Southwest LRT. Ramsey County Commissioner Rafael Ortega asked for a meeting soon to talk about how the region will build projects in East County on the Riverview Corridor and the Gold Line. And Washington County Commissioner Lisa Weik said she holds out hope that taking the issue of SWLRT off the table for now might clear the way for a special session to pass bonding and transportation bills that include the next payment for planning the Gold Line, a bus rapid transit route, from St. Paul to Woodbury.

Weik also said she was worried that if Southwest LRT fails now, the federal government will be leery of the state’s competence on transit projects. “So this vote on Southwest doesn’t just impact Southwest,” she said. “It does impact all of the other transit projects in our region.”

Hennepin County Commissioner Peter McLaughlin, who is the CTIB chair, called the funding plan a bridge to keep the project moving and to secure the massive federal investment: $928.8 million.

McLaughlin, who is also involved in the Blue Line and Green Line projects, said Southwest LRT is similar to those in its complexity. “It’s like threading dozens of needles and you have to do it in order and the needles aren’t all lined up straight and they’re moving all over the place,” McLaughlin said. “And this is the needle we need to thread on Aug. 31, 2016.”

Voting yes were Hennepin, Ramsey and Washington counties. Voting no were Dakota and Anoka counties. CTIB rules require that at least three counties support any action.

‘Throwing dirt’ by this time next year

Met Council leadership had hoped to secure what is called the Full Funding Grant Agreement from the FTA before President Obama left office. That agreement isn’t expected now until mid-2017, a delay Metro Transit’s top light rail official blamed on projects in other parts of the country getting environmental approvals in first.

But Mark Fuhrmann, program director for light rail, said he expects the funding agreement to be approved by the FTA. “By this time next year, we’ll be throwing dirt,” Fuhrmann said, referring to the start of actual construction on the project, which will extend the existing Green Line from Target Field down to Eden Prairie. The project has reached the 90 percent engineering phase and Met Transit expects to sign a contract for the light rail trains in the fall. Passenger service is now estimated to begin in 2021.

But the state’s final funding piece has been in doubt since Republicans won a majority in the state House of Representatives in 2014. Always suspicious of the benefits and costs of light rail, GOP leadership never agreed to a transportation deal that would include any money for light rail in the Twin Cities. Democrats who figured the House GOP would eventually compromise in order to win increased funding for roads and bridges across the state were proven to be overly optimistic. 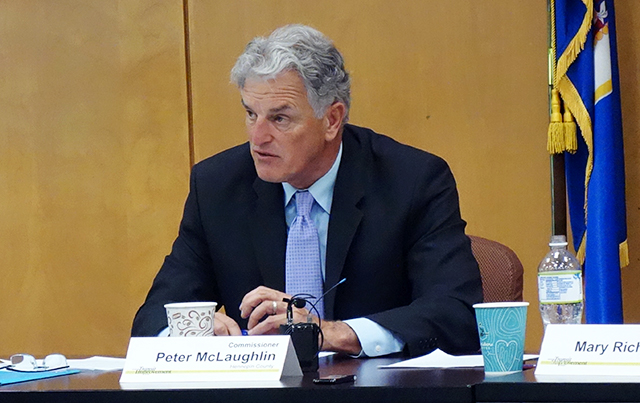 Even a gamble last summer by Duininck to abandon the very funding mechanism now at the heart of the rescue was not successful. After discussing the possibilities of using certificates of participation to fill in for the state money, Duininck pledged not to use them in hopes it would convince Republicans to pursue a deal.

It came after state Rep. Tim Kelly, R-Red Wing, complained about the use of the certificates, worrying as to how they would impact funding for other Metro Transit initiatives. “Should the Legislature ultimately choose not to fund the Southwest LRT project in a future legislative session, the project will not go forward,” Duininck wrote.

The move worked — to a degree. Kelly, who chairs the House Transportation Policy and Finance Committee, did try to broker a deal with Dayton. But a proposal that included money for Southwest LRT was never brought to a vote in the House. Then, during special session negotiations, several different mechanisms were presented by Dayton and DFL leaders. None were accepted.

Dayton said last week he “overruled” Duininck’s pledge, saying the project had to go forward. And on Tuesday, Duininck said the offer he made to legislators was in good faith and that he hoped GOP lawmakers would respond in good faith and be open to Southwest LRT funding. “They chose not to engage in that debate and not offer solutions,” he said.