The big story of this year’s House and Senate elections is how the presence of Donald J. Trump at the top of the GOP ticket affects Republicans running for Congress.

What’s getting less ink this cycle, however, is how Democrats are reckoning with the down-ballot effect of their nominee, Hillary Clinton — but that doesn’t mean some Democratic candidates aren’t having problems.

There’s good reason for that: broadly, Trump polls worse than Clinton, nationally and in the North Star State. And there are few elected Democrats out there who, like Rep. Erik Paulsen did with Trump, say that Clinton hasn’t earned their support.

Still, there are places in Minnesota where Clinton is unpopular, particularly in Greater Minnesota.

Though the three rural Minnesota districts represented by Democrats — the 1st, 7th, and 8th — are very different, their voting patterns on caucus night were similar: DFL voters in those districts went overwhelmingly for Sen. Bernie Sanders, while GOP caucus-goers were far friendlier toward Trump than their counterparts in urban and suburban Minnesota.

These greater Minnesota districts are all represented by Democrats, and much like the Republicans, Reps. Rick Nolan, Tim Walz, and Collin Peterson are being careful with how they talk about their party’s nominee — and the choices they’ve made reflect how Clinton might affect their fortunes.

Of the three rural Democrats, 8th District Rep. Rick Nolan is the only one with a truly competitive re-election battle this fall, and he has been very cautious in how he talks about Clinton.

Nolan again faces Stewart Mills, the Republican multimillionaire who came within two percent of winning this northeastern Minnesota seat in the 2014 election.

Normally, the higher turnout that comes with a presidential election benefits Democrats down the ticket, but Mills is running a tough challenge thanks to how Trump has scrambled the electoral dynamics in the 8th, a longtime Democratic stronghold. 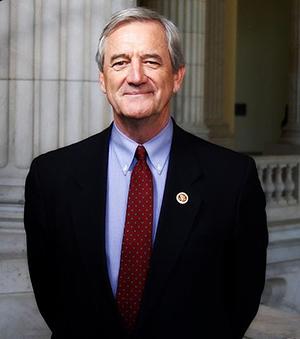 On caucus night, this district was Trump’s best showing in the state — 28 percent — and his popularity has endured since. The Trump campaign in Minnesota feels confident that they can finally turn northeastern Minnesota red.

Sensing opportunity, Mills has been saying good things about the New Yorker, and he’s acting like he thinks there may be some Trump coattails for him to ride on Election Day.

Meanwhile, Nolan — believed to be one of the House’s most vulnerable incumbent Democrats — has had a more complicated relationship with his party’s nominee.

Early on, it appeared as if Nolan leaned toward backing Clinton: along with other top Minnesota Democrats, he headlined a 2014 fundraiser for Ready for Hillary, the super PAC that helped launch her presidential bid.

Nolan held off on endorsing Clinton when she officially entered the race in 2015; many speculated he was waiting to see if Vice President Joe Biden would enter into the contest.

When a Biden bid failed to materialize, and Sanders’ campaign picked up steam, Nolan stayed mum through caucus day, when Sanders trounced Clinton by 30 points in his congressional district. In April, Nolan officially endorsed Sanders, though the Vermonter’s chances of securing the nomination were slim at that point.

As Clinton moved to lock up the nomination, Nolan said he was committed to Sanders, but he ultimately endorsed Clinton after she accepted the party’s nomination in Philadelphia in July.

Nolan told the Duluth News Tribune that Clinton wasn’t perfect, but “the fact that she’s embraced so much of what the Sanders campaign stood for makes it imperative we elect Hillary Clinton for president.”

In a Tuesday interview with MinnPost, Nolan didn’t have a lot of especially positive things to say about his party’s nominee. He said early polls showed Clinton “unbelievably far behind” in the 8th District, and said that Trump’s message was clearly resonating with his constituents.

“Her campaign is struggling along with Donald Trump’s campaign,” Nolan said, adding that “a fair number of people” in his district are talking about voting for Green Party nominee Jill Stein or Libertarian Party nominee Gary Johnson.

Nolan said he doesn’t believe that the situation at the top of the ticket will prove a drag on his chances, though. “I don’t think Donald Trump or Hillary Clinton is going to decide the election in the congressional race,” he said.

The Democrat sounded similar to Paulsen, the Minnesota Republican most threatened by Trump’s rise. Like Paulsen, Nolan has sought to downplay top-of-the-ticket effects, and stressed that voters will judge him and his opponent on their merits, not on the presidential candidates’.

“People are going to be looking at Mills and Nolan,” Nolan said, “and I feel confident we’re going to prevail.”

Walz is with her

Of the three greater Minnesota Democrats, Walz — the first Minnesotan U.S. House member to endorse Clinton this cycle — is arguably the safest this election season.

Walz again faces Republican challenger Jim Hagedorn, who he easily dispatched in 2014. Though the national GOP longs to take back this red-leaning seat, that’s unlikely to happen this year. 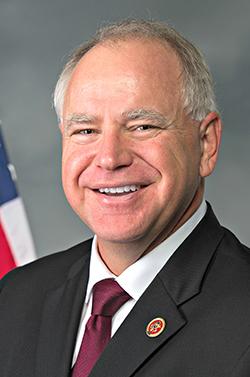 Due to Walz’s relative security, Clinton is less of a liability for him than she is for someone like Nolan. And the Mankato Democrat has been a strong supporter of Clinton from the get-go.

Ahead of the Iowa caucus, Walz crossed the border to campaign for Clinton at VFW posts and rallies in the northern part of the Hawkeye State; he also headlined a campaign event with Chelsea Clinton in Rochester ahead of the Minnesota caucus.

Walz has remained staunchly in Clinton’s column even as the former Secretary of State suffered her worst showing in Minnesota in his own district: Sanders beat her by a margin of 66 percent to 33 percent in the 1st District caucus.

Meanwhile, Trump had his second-best Minnesota caucus result in the 1st District. Hagedorn, a former arch-conservative blogger who struck similar notes to Trump before Trump even ran, has been making an explicit play for Trump voters in the district, going so far as to use the phrase “Trump-Hagedorn” in press releases.

Walz told MinnPost that it should be a fairly competitive battle between Trump and Clinton in his district on Election Day, but he isn’t shying away from advocating for Clinton in southern Minnesota.

“I expect it to be close,” Walz told MinnPost, citing the district’s history of going for both Republican and Democratic presidential candidates by narrow margins. “We manage our own race, we do what we can do, but I think the 1st District is one of those places where you still see split-ticket voters, so that makes it kind of interesting.”

He did say that “this race is closer than it should be.” With respect to what the Clinton campaign could do better, he said, “I would try to be a little more transparent, in all candidness with you,” and referenced the recent media frenzy over Clinton’s health and her bout with pneumonia.

Walz said he’ll continue to make the case that this is a binary election, and his constituents should choose Clinton over what he called the divisive, fear-based politics of Trump.

“The 1st District tends to lean on the side of civility, more so than fear,” he said. “I think that probably bodes well.”

Peterson would rather stay out of it

Then there’s Rep. Peterson. The Detroit Lakes Democrat, who has served the 7th District since 1991, says he’s never seen an election like this one, which he likened to a soap opera.

Peterson told MinnPost that he supports neither Clinton nor Trump at the moment. He said he continues to support Sanders — who won his district by 30 points — and didn’t rule out writing in the senator’s name on his ballot on Election Day. 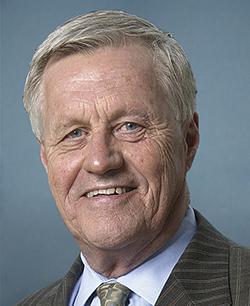 If Nolan’s 8th District slightly leans blue and Walz’s 1st District slightly leans red, Peterson has the distinction of being the House Democrat with the most conservative constituents. This vast western Minnesota district leans red by an average of six points, per the Cook Political Report, and voters here went for Romney over Obama in 2012 by a 10-point margin.

Trump has some appeal here: as in the 1st and the 8th, he fared far better here on caucus night than in the metro area.

But Peterson doesn’t have to worry about a Mills-style challenger looking to catch Trump’s coattails. In 2014, he made short work of a serious challenger, state Sen. Torrey Westrom; now, the national GOP appears to have given up on unseating him, and is running a political novice against him.

Though Peterson will almost certainly cruise to a 14th term, his cold shoulder toward his party’s nominee reflects how much of a liability Clinton may be in this part of Minnesota.

Many in D.C. and Minnesota were surprised when Peterson, perhaps the House’s most conservative Democrat, endorsed Sanders in March. He previously said he would support the Vermont socialist as a Democratic superdelegate because it reflected the will of his constituents.

In August, after Clinton locked up the nomination, Peterson appeared at FarmFest and said that he was “neutral” on the presidential contest.

Peterson’s main objective in keeping his distance from Clinton may not be his own fortunes, but those of Democrats running for state and local office. He said he’s doing everything he can to help elect younger Democrats at the state level, but is concerned about the effect Clinton is having down the ticket.

“These people who think that somehow there’s going to be an anti-Trump groundswell that’s going to elect Democrats, I don’t see that in my district. These legislative candidates don’t see that,” he said.

Peterson said Trump will probably win his district on Election Day, and that Trump voters will vote for him down the ticket because they know him.

But Peterson is not spending a lot of time worrying about the presidential race in the 7th.

When asked what his sense of the presidential race was in his district, Peterson said “I don’t know, and frankly, I don’t care. There’s nothing I can do about it.”