ST. CLOUD — When Courtney Baune finished her shift at Famous Dave’s on Saturday evening, she saw two unusual scenes unfolding in front of the Crossroads Center: screaming people rushing out of the shopping mall and police officers standing outside with assault rifles.

Uncertain of what was happening, she called her workers at the restaurant — which is located just several feet from the mall — and asked them to close it down.

“I knew that there was going to be something serious,” said Baune, who manages the restaurant. “At first when I saw the ambulances, I thought it was probably a minor incident. Then all of a sudden, I saw people flooding out of there. It was crazy.”

Later, Baune would learn along with the rest of the nation that longtime St. Cloud resident Dahir Adan allegedly injured nine people at the shopping center in a knife attack, which the FBI said it was investigating as a “potential act of terrorism.”

The suspect was later shot and killed by Jason Falconer, an off-duty officer with the Avon Police Department, noted St. Cloud Mayor Dave Kleis during a Sunday press conference.

Authorities said that the 20-year-old Somali-American suspect uttered “Allah” and asked at least one victim if he or she was a Muslim. Multiple news agencies linked the attack to the Islamic State, which claimed responsibility on Sunday.

“This is a very fluid situation, and it will continue to evolve,” FBI Special Agent in Charge Richard Thornton said at the press conference. “We are currently investigating this as a potential act of terrorism.”

On Sunday evening, a day after the incident, some members of the Somali-American community in St. Cloud had more questions about the stabbing attack than answers:

Authorities described the stabbing and shooting scenes, but what happened before that? Would it be possible that Adan first got into a fight with someone in the mall? Did the officer try to stop Adan before killing him? What was Adan’s motive for stricking people with a knife? Will the officers release the full video of the incident?

Those who knew Adan said the version of the story that law enforcement chronicles doesn’t fit with the true character of their friend. Abdinasir Ibrahim, of St. Cloud Technical and Community College, said he grew up with Adan — and remembered him as “very intelligent and smart.”

Adan and Ibrahim went to Apollo High School, where they graduated in 2014. “Dahir Adan was a good kid,” Ibrahim said. “He was a 4.0 student.”

After high school, Adan attended St. Cloud Tech and later transferred to St. Cloud State University, Ibrahim said, adding that he last saw Adan just two weeks ago at the university, doing homework. “He was a very intelligent kid. I was shocked. I couldn’t believe it.”

Abdikarin Mohamed, a nine-year neighbor of Adan, said he was also shocked that the peaceful, quiet man ended up dead, while stabbing people.

“I never expected I would hear anything like this about him,” Mohamed said. “I knew him very well. You would never see him at places where other people hang out. If he wasn’t at work, he was at home with his family.”

Adan, who was a part-time security guard with Electrolux, was wearing a uniform at the time of the shooting.

What he talked about on social media

When St. Cloud-born Nate Wolters joined the NBA in 2013, Adan took it to Facebook: “Shout out to Nate Wolters on getting drafted to the nba,” he wrote, “someone from St Cloud finally made it!” 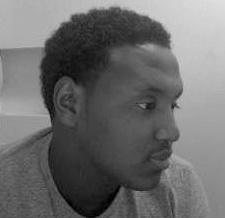 In 2012, Adan posted about a Hollywood comedy movie: “Think Like a Man was a nice movie, Kevin Hart funny as hell,” he wrote.

He also posted about not quitting: “My dictionary missing the word quit.”

In 2011, he posted about who is a “terrorist” in today’s media: “If the man who killed more than 70 persons in Norway was a Muslim, the media would have called him a terrorist. Instead the murderer was called “the aggressor (Reuters) or “the gunman” (BBC, CNN and Al Jazeera). The term “terrorist” is therefore reserved to Muslims. The USA talk about a violent attack not a terrorist attack. Please put this as your status to show that hypocrisy rules in this world!”

‘I haven’t seen him coming to the mosque’

Muhayadin Mohamed, president of the Islamic Center of St. Cloud, said he didn’t know Adan personally but he knows his father and some of his siblings.

“I haven’t seen him coming to the mosque,” he noted. “He wasn’t a student of ours. He was not a regular mosque comer, who normally comes to the five daily prayers.”

Mohamed, the neighbor, agreed. “Of course, most Somalis are Muslims,” he said. “But this guy was a typical American. He was just busy with school and work. He didn’t use to go to the mosque. So, it’s impossible that he turned an extremist.”

The St. Cloud area, like many rural towns, has been hostile at times to racial groups, including the growing population of Somali-Americans — and the immigrants say they’re fearful of a backlash.

“This kind of incident puts us at a difficult position. In one way, we are affected by the horrific incident,” Muhayadin Mohamed said. “At the same time, the other community is looking at us as if we are the suspects. That really puts us in a difficult position. We always try to be vigilant and be safe.”

He added: “It was a tragic incident. We’re really saddened and shocked by this incident as a community. Our thoughts and prayers are with the victims of this act.”

Doug Newman, who was near the Crossroads Center with his wife and granddaughter on Sunday, said that the lone attack should not divide the community.

“We were at a church this morning, and a doctor said, ‘We can’t judge from just one person doing wrong,’ ”he said. “She works with a bunch of Somalians, and she said they’re loving people, and some of them love Jesus. Just because one went wrong doesn’t mean all are that way. We should love each other.”

Baune, the restaurant manager, added: “He seemed like a normal guy. He was educated. It was kind of odd to think that somebody who does have an education could just snap one day. I’m not quite sure what the motive was. I hope it’s nothing like a group thing.