On Nov. 8, Minnesota voters will consider a question they probably haven’t given much thought to: Should state legislators set their own salaries, or should a totally independent group decide how much lawmakers are paid?

Lawmakers passed the legislation to put the constitutional amendment on the ballot back in 2013, but in the years since then, no one has talked about it all that much. Not the majority of state representative and senators who voted in favor of putting the amendment on the ballot this year. And not the proposal’s critics, who have yet even to form an official campaign against the initiative.

And yet, voters will have to decide if they support or oppose an independent council on legislative pay when they cast their ballots in six weeks. In Minnesota, a constitutional amendment can only pass if the majority of voters who cast ballots in the election vote “yes”; leaving the question blank is essentially the same thing as voting “no.”

Here’s a breakdown of the issue: why some people don’t like it, and what’s happened in other states that set up similar commissions to decide legislator pay.

How are Minnesota legislators paid now — and how much?
Under a clause in the state’s constitution, legislators are required to set pay for a wide range of public officials — including themselves. Minnesota legislators make a $31,140 yearly salary for a job that is classified as part-time, covering the four or five months a year legislators are in session in St. Paul. Those serving in leadership positions get a $12,456 annual bonus, and everyone is eligible for daily per diem payments: $96 a day for senators and $77 for House members during the session. That doesn’t include lodging expenses, a necessity for outstate legislators, and for which lawmakers can get reimbursed up to $1,200 a month.

If the amendment passes, what would change?
The idea behind the amendment is to take the power to set legislative pay out of the hands of lawmakers and transfer it to an independent citizen group. The exact language of the ballot question reads: “Shall the Minnesota Constitution be amended to remove legislators’ ability to set their own salaries, and instead establish an independent, citizens-only council to prescribe salaries for legislators?”

If the amendment passes, a 16-member salary council would be formed to decide legislator pay every two years. The governor and the Minnesota Supreme Court chief justice would pick the members. No legislators — past or present — or their spouses would be allowed to serve on the council, and lobbyists, judges and state employees would also be barred. Appointees would be split evenly between the two major political parties.

Minnesota already has a little-known council that recommends salaries for lawmakers, but they don’t have authority to enact pay raises or decreases, and legislators have ignored their recommendations for years. If the amendment passes, the new council would have the authority to actually change pay for legislators.

Why can’t legislators just deal with it themselves?
Lawmakers voting to raise their own paycheck is politically dicey, so it doesn’t happen very often. In 2006, 17 incumbent lawmakers in Pennsylvania were ousted after voting to increase their pay by 16 percent.

Minnesota’s very first senators and representatives were paid $5 a day in the 1870s. It took until 1945 to hit $1,000 annually, but pay climbed up steadily after that. Legislators last voted to increase their pay back in 1999, when it was raised from $29,657 a year to its current level. But it’s been stuck there ever since, even as other state employees’ salaries increased. Legislative aides now have a higher salary than their bosses, starting at $32,368 a year, though their job is considered full-time.

Sen. Kent Eken, DFL-Twin Valley, said the idea behind the amendment is to simply remove the conflict of interest in letting legislators vote on their own pay. But others say it’s time for legislator salaries to increase: While the job is technically only part time, it’s hard for some legislators to find jobs that let them work only half the year. And with irregular hours during session, constituent services and the rigors of the campaign trail, many argue the job requires at least a full-time commitment. The constraints can restrict who is able to serve in the Legislature, leading to more independently wealthy legislators or retirees who have flexible schedules.

Who opposes the amendment?
Not everyone agrees that legislators deserve a raise, and many think the $31,000 a year salary is already high for a part-time job. What’s more, critics say the new independent legislative commission is simply a way to raise legislator salaries without them having to vote on it. Still, so far, no organized opposition to the amendment has emerged.

Do other states have independent councils, and do they give legislators a raise?
In about 20 other states, voters or lawmakers have decided to appoint an independent group of citizens to review and make recommendations on what elected officials should be paid. The makeup of the commission — and their ultimate authority — varies from state to state. In states like California and Washington, the commission has the unilateral authority to raise or lower legislator paychecks.

In states like New York, the legislature can veto the recommendations, but they would have to call a special session to do so before they automatically go into effect. In Missouri and Connecticut, legislators must take a vote on the recommendations before they can become final. In Arizona and Nebraska, legislative pay commission can make recommendations, but voters get the last say as to whether they are implemented. In those states, wages have remained stagnant, with Nebraska legislators making $12,000 a year. 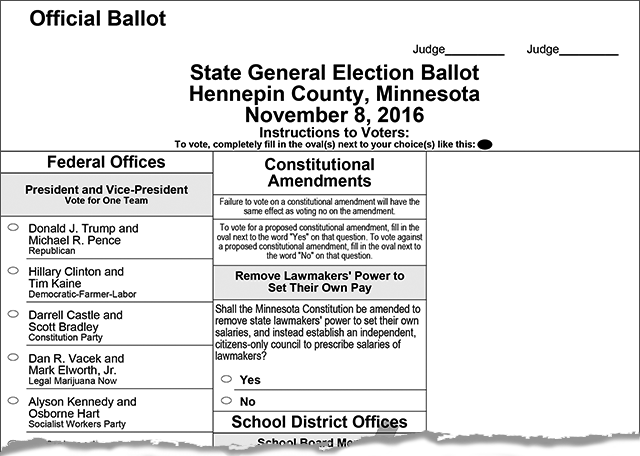 A detail from the 2016 Minnesota sample ballot showing the amendment question.

In states where the commission has stronger authority, pay for legislators is more likely to go up. In 2009, an all-new compensation commission in Alaska recommended a $26,000 pay increase, which raised legislator salaries for the first time in 15 years. Currently, Alaska legislators make $50,400 a year for the part-time job. In Arkansas last year, a newly established pay commission — added to the constitution by amendment — recommended legislator pay increase from $15,869 to $39,400.

Do the legislative pay commissions ever lower legislators’ salaries?
Yes, though it happens less often. Between 2009 and 2012, a compensation commission in California cut legislative salaries by 23 percent after deciding lawmakers should share the pain of deep budget cuts. With the economy on the rebound, the commission has restored most of those cuts. This year California’s commission voted to boosts legislators’ salaries from $100,000 to $104,000, which automatically goes into effect on Dec. 7. In Michigan in 2011, a legislative pay commission recommended legislators take a 10 percent reduction in pay, lowering their  $79,650 salary to $71,685. Both Michigan and California legislatures serve full-time.

Do independent commissions ever leave pay flat?
Yes. In Utah, legislators are paid $273 a week, but its independent commission didn’t recommend any changes to compensation in 2016. In New Jersey, Gov. Chris Christie got around the state’s seven-member compensation commission by withholding his appointments to the group. Without his appointments, the group cannot reach a quorum and takes votes on legislator pay.

Has there been any research done on how much legislators should be paid?
Researchers at Boise State University tried to tackle that question in 2014, specifically focusing on whether or not better-funded Legislatures are better at governing. To do so, political scientists created a scale of professionalism that included three components: salary, the number of days in a legislative session, and the size of the legislature’s staff. The research found that legislatures with higher pay, more time in session and more resources for legislators passed a greater percentage of bills overall. Those legislatures were also more efficient, connected to their constituents and independent from their leadership or political party.

If the amendment passes, how much could legislator pay go up in Minnesota?
No one knows for sure what the commission might do, but Minnesota legislator salaries are in middle of the pack compared to other states. In 2013, Minnesota’s current compensation council recommended the annual salary of state legislators should equal 33 percent of the governor’s $120,000 salary starting in 2015. That would bring legislator pay closer to $40,000 per year.

There’s an amendment to the state constitution on the ballot this year. Here’s what you need to know about it.