Erin Maye Quade isn’t exactly a newcomer to politics. She works for U.S. Rep. Keith Ellison, after all, and has knocked on plenty of doors over the years for the fifth-term congressman from Minneapolis.

But even she wasn’t prepared for much of what’s happened in her first campaign for a seat in the Minnesota House representing Apple Valley. So far, she’s had years-old social media posts scrutinized and publicized by a group opposing her candidacy; her Republican opponent has tried to make an issue of the fact that Maye Quade is a biracial woman married to another woman; and a Republican tracker has followed so closely while knocking on doors that a local neighborhood watch got involved.

“It’s a steep learning curve,” Maye Quade said at a Minneapolis coffee shop on a break from her regular, 9-to-5 job of doing constituent services for Ellison. “I don’t think anything could have prepared me to be a candidate.”

Maye Quade is one of hundreds of candidates registered and running for a seat in Minnesota’s House or Senate this fall. In competitive districts across the state, getting that job is a grueling marathon of fundraisers, parades, door-knocking and debates that can last more than a year.

The candidates endure stolen and vandalized campaign signs, or people who simply refuse to shake their hand. Their every move can be under surveillance, with trackers following them at events and researchers digging through their past records and social media posts.

It can also mean, in a time of increased political spending, becoming the subject of attack ads for the first time, as a competitive race for a single seat in 201-seat Legislature can attract $1 million in spending by outside groups.

All for a job that often offers long and irregular hours — and a salary of about $31,000 a year. 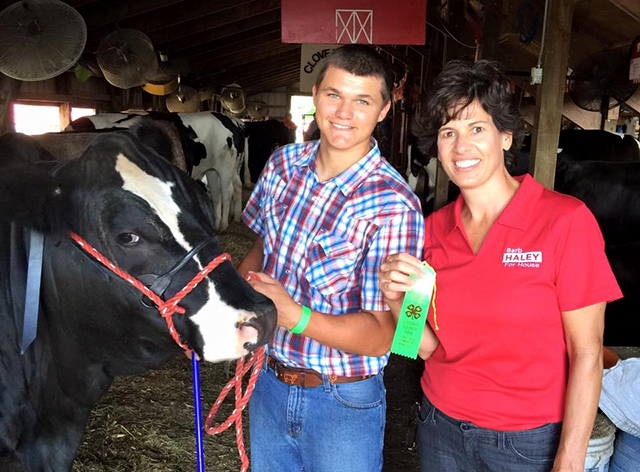 Haley for House
Barb Haley, Republican running for House District 21A: “You feel like we have to keep moving as fast as you can.”

“I knew it would be hard work, but it’s extremely hard work,” said Barb Haley, a Republican running for an open House seat in Red Wing. “The difference is the intensity of it. You feel like we have to keep moving as fast as you can. Every day, as hard as I’ve worked, I feel like I didn’t get it all done. There was still a phone call I wanted to make but couldn’t, or a meeting I wanted to take but there wasn’t time.”

A day in the life

There is no such thing as an average day for a legislative candidate, but most days have the same big components. One of the most labor-intensive pieces of a campaign is door knocking. In competitive districts, candidates are out at least five or six days a week, knocking on doors for several hours, sometimes in intense heat and humidity. Rural candidates in geographically sprawling and sparsely populated districts can put thousands of miles on their cars by the end of a campaign season just to reach voters.

When they aren’t knocking on doors, candidates are usually fundraising or filling out screening questionnaires to get as many endorsements as possible. And then there are the events all candidates do: parades, town festivals, ad-hoc get-togethers in the homes of voters or with local coffee groups, or talking at luncheon meetings for chambers of commerce or rotary clubs. And each day, there are always a handful of small tasks that need to be tackled, like updating websites or social media feeds, approving ads and debate preparation.

All of which is often done in a candidate’s “spare time.” Most candidates still hold down regular day jobs, so they have to find time for all campaign activities when they’re not working. 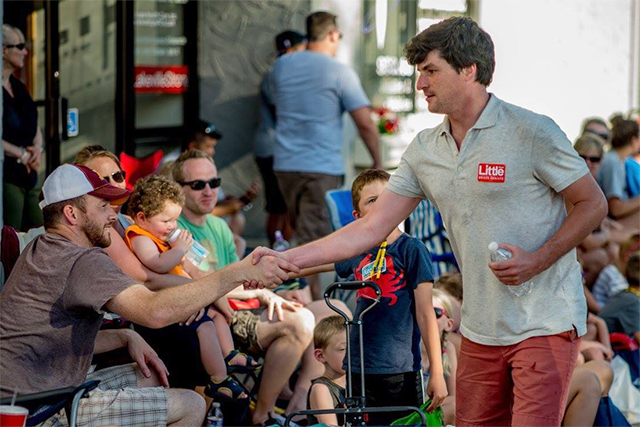 “I’m still the mayor, which I love, so that takes about 15 to 20 hours a week for ribbon cuttings and meetings and correspondence, and I still have a law firm with cases I’m maintaining through the election,” said Matt Little, the mayor of Lakeville who’s running for the area’s open state Senate seat as a Democrat. “The campaign is 50 hours a week. An average day is: Wake up, ads to design, letters to write, money to raise. I do that during the morning hours. In the afternoon we knock on doors, then in the evening again. Then you try and eat sleep and exercise, all the maintaining-a-life-type stuff.”

Republican candidate Paul Anderson, who is running for a competitive open Senate seat in the Minnetonka and Plymouth area, said he knocks on doors nearly every single day of the week. He’s been surprised how many people have “no soliciting” signs or simply don’t answer their door even though they’re clearly home.

“You have to be driven to do it and you have to love the process,” he said. “It is a amazing the amount of work that I absolutely knew that I was getting into. It’s been the greatest weight loss program ever.” 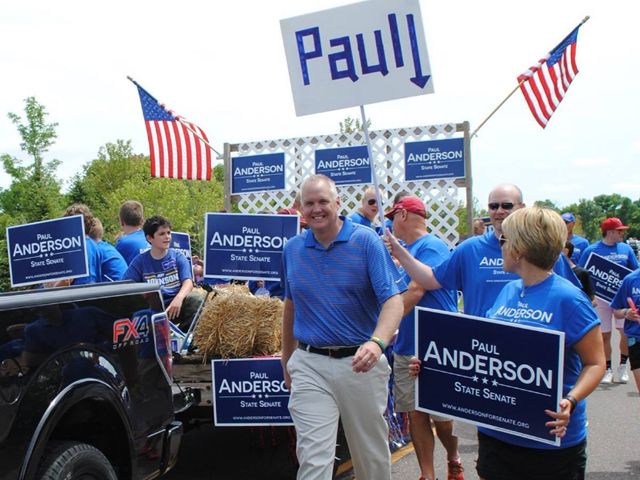 Mark Johnson is a relative newcomer to politics, so he surprised everyone when he cleared the Republican field in April and won party’s endorsement for a competitive open Senate seat in northern Minnesota that includes cities like Thief River Falls. He and his wife launched an intense campaign to win the endorsement, and their work hasn’t stopped since then.

“It’s the marathon aspect that really gets me,” said Johnson. “Your mind is constantly engaged in the campaign. No matter what you’re doing, even when you’re trying to take a break, you’re like, ‘What I should be doing? How can I be getting the message out?’ ” Johnson said.

“I’m curious what will happen on November 9, whether we win or lose. My wife and I will probably look at each like: What now?”

Candidates say most of their interactions with voters are tame, especially in the land of “Minnesota nice,” where people would rather invite you in for a glass of lemonade then tell you they disagree with everything you stand for. 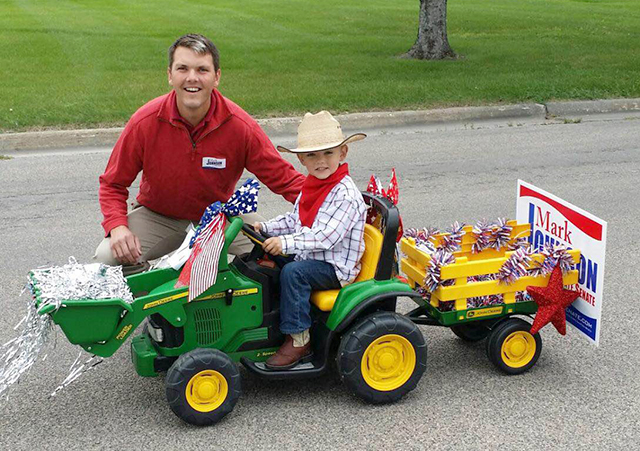 Hostile interactions with voters are less common, but they do happen. Meg Litts, a teacher and Democrat running in House District 9A, a conservative-leaning district that covers cities like Staples and Wadena in the central part of the state, recently had a group of people throw rocks at her as she was walking in a parade in Verndale, Minnesota. As the rocks hit her, some people sitting on the sidelines cheered and laughed. At another parade, people on the sidelines kicked candy back at her and said, “We don’t want your Democratic candy.”

Earlier in the campaign season, her home was egged, though she’s not sure who did it or if it was campaign related. “They had to enter the property to do that, so that was discouraging and alarming. My first reaction was, ‘I’m really glad my kids aren’t living at home right now,’” Litts said. “In terms of whether or not to run, certainly that’s crossed my mind because of the safety and security issues, and it is hard work, so you stop and think about it.” 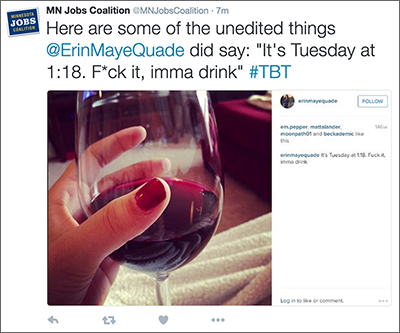 Haley said social media can amplify negative comments in a campaign. A handful of negative comments posted on her Facebook page particularly bothered Haley’s teenage daughter, who wanted her to respond online. “Social media gives a whole new opportunity to be a little bit nameless faceless and still say pretty bad things about you,” Haley said. “I know I need to steel myself up for those things, but it’s hard on your family.”

Social media is also an easy avenue for opposition research — when opposing parties dig into a candidate’s past to find damning campaign material. On Thursday, the Minnesota Jobs Coalition, a outside campaign spending group that advocates on behalf of conservative candidates, posted screenshots of a series of old Instagram posts and tweets from Maye Quade. In one, she’s holding up a glass of wine and the caption reads: “It’s Tuesday at 1:18. F*ck it, imma drink.”

On the other side of the race, Apple Valley Republican candidate Ali Jimenez-Hopper took heat this spring after someone recorded her speech at the local party’s endorsing convention, where she commented on Maye Quade’s sexuality and race.

Jimenez-Hopper later told the Star Tribune she felt that Democrats misconstrued her comments.

From ‘What it Takes’ to ‘Why bother?’

So why even run? In interviews with a dozen legislative candidates, most said they asked themselves that question at least once during the course of a campaign, especially considering they were taking a dramatic pay decrease to serve in St. Paul.

Each person’s reasons are different. Some see legislative seats as a stepping stone to bigger things — many of Minnesota’s U.S. senators, members of Congress and governors came from legislative ranks. Others are happy serving their community in the House or Senate, while some are driven by specific issues.

While Maye Quade was working for Ellison, she sat in on a presentation from the Sheridan Story, a nonprofit that works to feed hungry children on the weekends by connecting churches with local business. During the presentation, the group projected a map of where they serve the most kids, and Maye Quade saw her old elementary school, Greenleaf, in Apple Valley, show up on the list.

After doing some research, Maye Quade decided the best way to bring attention to the issue was to make it the centerpiece of a campaign for the Legislature. She announced her campaign for House District 57A in November last year. Then, earlier this year, the district’s incumbent legislator, GOP Rep. Tara Mack, announced that she was retiring, leaving the seat wide open.

Yet going from political organizer to political candidate involved far more than Maye Quade ever anticipated.

“The screenings, the questionnaires, the minutiae of getting a website and a logo and figuring out, how can people get in contact with me? How can you delegate? Prioritizing things?” She said. “And you have to be ready to share a lot more of your time — and yourself — publicly.”

What it’s really like to run for the Minnesota Legislature