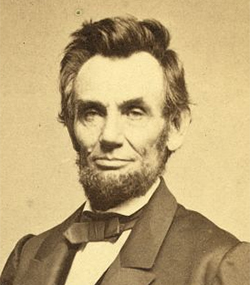 Nolan West is a 25-year-old Republican candidate for the Minnesota House of Representatives. On paper, he has all the ingredients needed to be a successful candidate. A graduate of the University of Minnesota, he was raised in Blaine, where he is running for office, and where his mother is a well-know Anoka County commissioner.

And until not that long ago, West’s plan to replace his boss in the Minnesota House, Rep. Tim Sanders, seemed like safe bet for Republicans.

That all changed last week, after the Star Tribune reported that West had authored numerous posts on Facebook that — among other things — called Abraham Lincoln “the single worst president this country has ever seen,” while praising  Jefferson Davis, the president of the Confederacy during the Civil War.

And yet, West isn’t the only Republican who seems to have a problem with the Great Emancipator. In the Second Congressional District, GOP candidate Jason Lewis has been criticized by both Republicans and Democrats about his past comments about Lincoln and slavery. In his book, “Power Divided Is Power Checked: The Argument for States’ Rights,” Lewis wrote that Lincoln “exploited the issue” of slavery, adding the Civil War had “more to do with secession” than slavery. Throughout the book, Lewis is critical of the expanded role of the federal government that Lincoln initiated to preserve the Union.

It may be surprising to see Republicans, especially Republicans from Minnesota — the first state to offer a regiment of volunteer militia to fight in the Civil War — take such a strong public stance against Lincoln. But such opinions are shared by a sizable faction of the Libertarian-wing of Republican Party.

Blame (or credit) Ron Paul, the former congressman who ran for president three times: once as a member of the Libertarian Party and twice as a Republican. For decades, he’s occupied a prominent place as the anti-Lincoln spokesman inside the GOP. And though Paul left office in 2013, he cultivated a loyal following among Republicans who were all too willing to parrot his criticisms of Lincoln.

In comments echoed by West and Lewis, Paul has long been critical of Lincoln’s policies as president, specifically his leadership during the Civil War, a conflict that Paul has called a “senseless” war to “get rid of the original intent of the republic.”

Even before Paul ended his career in public office, his legion of followers/supporters were more than happy to support Paul’s son, Rand Paul, who was elected to the U.S. Senate from Kentucky in 2010 and made a bid for the 2016 Republican presidential nomination.

Not surprisingly, Lewis’ campaign in Minnesota has been endorsed by Paul, and the Second Congressional District is home to an active group of Libertarian/Republican activists who identify with the Paul’s political ideology.

And while it goes without saying that Lincoln is plenty admired by an overwhelming majority of Republican activists (there’s a reason the Republican Party of Minnesota’s annual fundraising dinner is called the Lincoln-Reagan dinner), the comments by West and Lewis have handed their DFL opponents and easy opportunity to criticize them, and further narrowed the Republican candidates’ paths to victory.

In an election year that long ago lost any capacity to surprise, perhaps it’s fitting that Democrats in Minnesota seem more comfortable defending the legacy of Lincoln than members of his own party.