Rep. Collin Peterson, the Democrat who represents solidly red western Minnesota, perennially has a target on his back.

Republicans would love nothing more than to knock off Peterson, and they’ve tried to do it for years, occasionally fielding strong and well-funded challengers.

In this election cycle, though, the GOP has clearly found its target less appealing: Peterson’s challenger, David Hughes, is new to politics, and his campaign is poorly funded.

Peterson is all but certain to cruise to a 14th term. Republicans still talk a big game about turning this district red, but will that happen anytime soon?

Few scares in a long career

Seventh District voters first sent Peterson to Congress in the 1990 midterm election. After barely winning his first re-election contest, Peterson romped to big wins in subsequent cycles, routinely winning by at least 30 points, or in one case, 45 points.

This district, which encompasses the western half of the state from the border with Canada to near the border with Iowa, grew redder even as it continued to send Peterson back to Washington.

A majority of voters in the 7th went twice for George W. Bush, broke for John McCain in 2008, and selected Mitt Romney in 2012 by a nine-point margin as Barack Obama won Minnesota by over seven points. According to the Cook Political Report’s Partisan Voter Index, the GOP has a six-point advantage in the 7th District — only four points fewer than the deeply conservative 6th District.

If Republicans were going to knock off Peterson, 2014 looked like a good year to do it.

His opponent in 2014 was state Sen. Torrey Westrom, a Republican from Elbow Lake who represented Minnesota House District 11A for 16 years before winning the Senate District 12 seat in 2012.

Westrom attracted enthusiastic backing from national Republicans: He was named to the National Republican Congressional Committee’s “Young Guns” program, and he hauled in over $1 million in campaign contributions.

Though 10 incumbent House Democrats were defeated on Election Day, helping Republicans achieve a 247-seat majority in the House, Peterson stayed safe. Ultimately, Westrom didn’t come close — he was defeated by over eight points.

Perhaps because of Peterson’s strong showing in two bad cycles for Democrats — he won by over 20 points in 2010, a historically awful year for Democrats — national Republicans are putting their chips elsewhere this cycle.

The national map doesn’t favor them, either: Across the country, the GOP is playing defense, expending lots of resources to protect House members in moderate districts from being overtaken by an anti-Donald Trump wave.

In Minnesota, Republicans are not only seriously defending 3rd District Rep. Erik Paulsen for the first time, but are attempting to keep the 2nd District seat red in the wake of Rep. John Kline’s retirement.

The GOP has concentrated its Minnesota offense in the 8th District, where DFL Rep. Rick Nolan and Republican Stewart Mills are in a tight contest. That race has become the most expensive House contest in the country.

That means the spotlight is far away from the 7th District, and the Republicans’ latest challenger to Peterson isn’t attracting much attention. 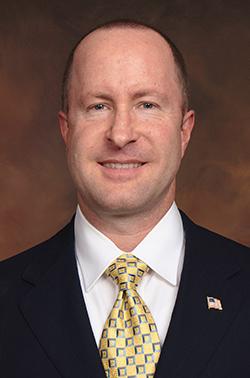 The party endorsed David Hughes, an Air Force veteran from Karlstad, who defeated Amanda Lynn Hinson, an author from Long Prairie, in the August primary. He moved to Minnesota in 2013 to work with defense contractor General Atomics as a drone pilot instructor for U.S. Customs and Border Protection.

Hughes calls himself a constitutional conservative, and his stances on the issues fall squarely on the right flank of the GOP: He is in favor of abolishing the income tax, banning public employee labor unions, and repealing the 17th Amendment, which provides for popular election of U.S. senators.

Hughes has never before run for office. He has raised just $13,234 to date, and has received minimal assistance from the state GOP, and no assistance at all from the NRCC.

The first-time candidate was clear-eyed about his chances on Election Day, telling MinnPost that his 2016 run has been a learning process, and made it clear that he will continue to challenge Peterson until he’s successful.

“He’s a 26-year incumbent with universal name recognition and a large war chest, and I don’t have any of those things,” Hughes said. “If I’m not successful, my intent is to take a few weeks off and by late November, get started again.”

Hughes said he plans to put together a comprehensive campaign team next time around that can raise the money needed to be competitive.

“I’ve never done this before,” he said. “We did what we thought were the right moves. The FEC reports reveal we’ve come up short.”

He brought up Peterson’s own example — the Democrat ran unsuccessfully for the 7th District seat in 1984 and 1986 before winning in 1990.

“I’m coming back in ‘18 again, who knows, maybe a third and fourth try,” Hughes said. “I’m going to persevere and eventually beat Collin.”

What will it take to win?

It will take more than better fundraising to defeat Peterson, however — for Hughes or any other Republican who takes him on.

Peterson’s name recognition is extremely high: Voters in this district simply know him well, and in a region where the agriculture industry is dominant, his record as House Democrats’ top member on the Agriculture Committee leaves little space for a challenger to get in the door.

According to Tim Lindberg, an assistant professor of politics at the University of Minnesota-Morris, Peterson is “well-liked in the district, regardless of his partisan status.”

“There’s something to be said for people in the district recognizing it because he’s been there for so long, he’s got more clout, particularly on ag issues, where he tends to vote pro agriculture. He’s one of the few remaining congressmen who are from primarily ag districts left in the U.S.”

A successful Republican candidate would need to make the case that he or she would be stronger on ag issues in Congress as a freshman than the senior Peterson — a tall order in this political climate, where some in the ag community associate Republicans with farm subsidy slashing.

On his website, Hughes advocates “free market reforms” to agriculture policy, but he told MinnPost that is a long-term goal.

Republicans’ strategy here has been to follow national trends, so they will likely invest more in this district in the 2018 midterm, particularly if Hillary Clinton were to win the presidency. Lindberg says even in that case, the cycle-to-cycle fluctuations in turnout that make some incumbents vulnerable don’t seem to affect Peterson.

Lindberg suggested that the GOP may only take this seat when Peterson decides to retire. Once he does, Lindberg said, “Democrats would have a hard time holding on to the district.”

Peterson himself is keeping a low profile — Lindberg said he was “invisible” in the district in this uncompetitive race — and told MinnPost he is spending time helping DFL candidates down-ballot.

Never one to wax poetic, Peterson chalked up his electoral success to his relationships with his constituents.