The Republican Party of Minnesota’s attack on Democratic candidate John Huot wasn’t supposed to relate to the presidential race.

The glossy political mailer criticized Huot for allegedly not paying his taxes, saying “would you trust someone who didn’t pay his own taxes to protect our tax dollars?” But the flier hit mailboxes in the Rosemount-area state House district around the same time The New York Times revealed that Republican nominee Donald Trump’s may have avoided paying income taxes for years.

It was an unintentional nod to the presidential race — but it’s also the closest Minnesota legislative mail has come to referencing the contest at the top of the ticket. In races for the Minnesota House and Senate this fall, it turns out, candidates, parties and outside groups are keeping the focus local.

MinnPost reviewed hundreds of political mailers to discern the big themes — from health care to legislative pay raises — in the tight race for control of the Minnesota Legislature. Some of the mailers are are positive, laying out the priorities for each candidate or trying to introduce a newcomer to voters in their districts. But many of the political mailers go on the attack, touching on everything from proposed gas tax increases and the state’s health insurance exchange to issues even closer to home, like candidates’ records on their local school boards and city councils. And yes, those old social media posts and tax records are fair game, too.

Republicans must have polling that says Minnesotans are concerned about their health-care options, because they are hitting DFL legislative candidates hard on the issue in competitive House and Senate districts across the state. Most of the mailers try to tie DFL legislators to the state’s troubled health insurance exchange, MNsure, which recently announced people on the exchange would see their premiums increase by 50 percent or more.

Only about 5 percent of Minnesotans get their insurance through the individual market, but the fear is widespread. The Freedom Club of Minnesota, a conservative outside spending group, has sent out hundreds of copy-and-paste mailers saying the state’s health-care system is “broken.”

“Who is to blame? Let’s start with politician…” (fill in the blank). 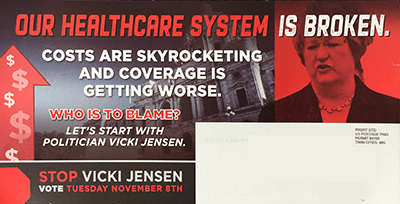 Another Freedom Club mailer being sent out in legislative districts says MNsure is so poorly mismanaged that “thousands of Minnesotans Social Security Numbers and personal information was compromised.” The mailer also quotes Gov. Mark Dayton saying he is “extremely disappointed” with the marketplace; it must have been printed before Dayton’s most recent headline-grabbing quote on the subject, when he said the “Affordable Care Act is no longer affordable” (which will no doubt be coming soon to mailers near you).

MNsure is by far the most common issue brought up in Republican mailers, but Democrats are going on the attack about health care, too. A theme in several competitive suburban races is that Republicans cut funding for women’s health care. A mailer from the DFL Party claimed Rep. Roz Peterson, R-Lakeville, blocked a plan to require employers to provide birth control to their employees and would let insurance companies “deny women coverage for mammograms.” Planned Parenthood has also been a big player in a handful of districts, sending out mail promoting pro-choice candidates.

Spend too much, cut too much

It’s an age-old political attack, and it’s back: Democrats tax and spend too much, and Republicans cut spending too deeply. 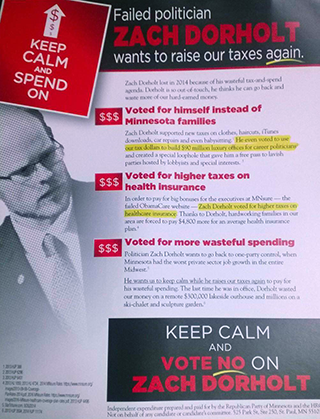 One mailer from the Minnesota Action Network, another conservative-aligned outside spending group, attacks DFL senators for supporting a transportation funding plan this session that would raise the gas tax by 16 cents. Another piece from the group says Democrats increased government spending by 24 percent, without going into exactly what that number means.

Multiple mailers also mention Republicans’ favorite example of DFL spending: the $90 million Senate office building. The building, added to the tax bill by Democrats in 2013, was used by Republicans in their successful 2014 campaign to take back the House. Senate Republicans are hoping the message is just as potent this time around.

In St. Cloud, House Republicans sent out a mailer against DFL candidate Zach Dorholt with the message: “Keep Calm and Spend On.” The mailer highlights individual projects included in a state bonding bill that Dorholt and others voted for, including “a $300,000 lakeside outhouse” and a ski chalet and sculpture garden.

But on the other side of that race, the DFL Party is criticizing Republican Rep. Jim Knoblach, chair of the House Ways and Means Committee, for cutting deals in St. Paul that “cut our schools.” The mailer says he “cut $185 million from public schools” and blocked all-day kindergarten proposals. He also wrote the budget that “stopped the tuition freeze at 4-year public colleges — increasing tuition at St. Cloud State,” according to the piece.

Voters aren’t hearing much this fall about a constitutional amendment to create an independent legislative pay commission — no campaigns have formed on either side of the issue — but they’re hearing plenty about legislators voting to raise their own pay.

It’s a classic campaign hit, and a potent one, too: Pennsylvania had one of the highest turnovers in history in 2006 after legislators voted to raise their pay in the middle of the night. 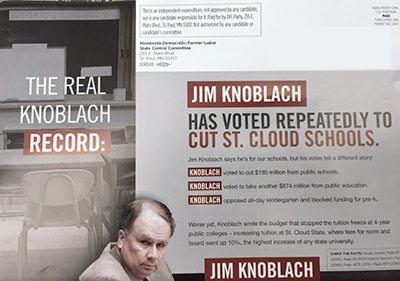 In 2013, the Minnesota Senate narrowly passed a bill that would give state representatives and senators a pay increase, arguing a pay raise is overdue to attract well-qualified candidates to run for the Legislature. But the bill never got a vote in the House, and now it’s being used on campaign mailers against senators, who haven’t been up for re-election since 2012.

An online ad from the Freedom Club says Sen. Jim Carlson, DFL-Eagan, and others voted to raise taxes and give themselves a 35 percent pay increase.  Democrats are also using the pay-raise issue, criticizing Republican House Tax Chairman Greg Davids for voting for a pay raise all the way back in the late 1990s, the last time legislators voted to increase pay for state lawmakers.

Political mailers don’t always say who or what, but they definitely want voters feel candidates are being controlled by moneyed interests outside of the Capitol.

For example, a mailer from the Northstar Leadership Fund, which is funded by CEOs and executives from Minnesota companies, asks: “Who’s behind Mary T’Kach — the big spenders. Vote no.” The flier has no other explanation as to why T’Kach, a Democrat running for an open House seat in Inver Grove Heights, is supposedly backed by big spenders. 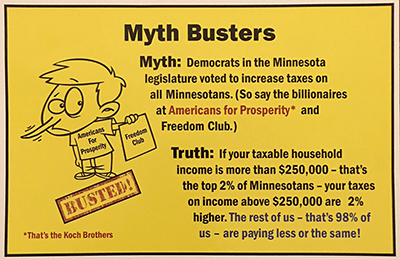 This cycle, Republican groups are also using the broad term “Twin Cities liberals” in a lot of mailers, saying they want control what happens in St. Paul. House Republicans sent out a mailer showing Democratic candidates against a backdrop of spraying champagne bottles, criticizing them for giving MNsure executives bonuses and having “lavish” parties with lobbyists and special-interest groups.

In some races, Democrats are pushing back on the special-interest message. Sen. Jim Carlson, DFL-Eagan, was hit by so many mailers from the group Americans for Prosperity that he felt the need to respond. He released a mailer titled “Myth Busters” that tied the group to its funders, conservative billionaires Charles and David Koch.

And then there’s the political mail that’s about, uh, political mail? The DFL Party sent out a mailer on behalf of multiple candidates with the message: “big corporations and CEOs” will spend “gobs of money” to attack DFLers with mailers.

The party’s advice to voters: Recycle the mailers.