The Minneapolis Cedar-Riverside neighborhood residents received a pleasant surprise on Thursday afternoon: Stevie Wonder, the iconic musician whose songs have touched millions of people around the world.

Wonder — who came to Minnesota to perform at the Thursday night Prince tribute concert in St. Paul — spoke to a crowd of fans, activists and young students at Brian Coyle Center near the University of Minnesota’s West Bank.

“I want to share with you that I’m here in this city to celebrate the life of a man who did some great things with his talent,” he said of Prince, who died in April at age 57 in his Chanhassen complex. “Unfortunately he’s no longer here, but no different than many we have lost, we must perpetuate his legacy.”

The 66-year-old music legend then expressed his views about the current social and political events in the United States — including the racial tensions between law enforcement and communities of color as well as the presidential race between Donald Trump and Hillary Clinton.

“When people say to me … what do I feel about Black Lives Matter, I say to them, as I will say to you and everyone all over the world today and forever, ‘Of course black lives matter,’” he said.

He added: “We’re the original people of the planet, and that’s a wonderful thing because it means that all the other civilizations are children to us. It means that we really must begin to value ourselves.”

Wonder also addressed the crowd about the importance of civic engagement and encouraged them to vote on Nov. 8, when Americans elect their next president.

“For those of you who are able to vote and old enough to vote, please do vote,” he said. “If anybody says to you that your voice doesn’t matter, don’t believe it. It’s a strategy to create a place of negativity. Your vote matters.”

In the last several months, various religious and ethnic groups in Minnesota have been working to organize their communities to vote against Republican presidential candidate Donald Trump, who called for a ban of Muslims and dubbed Mexican undocumented immigrants “criminals” and “rapists.” 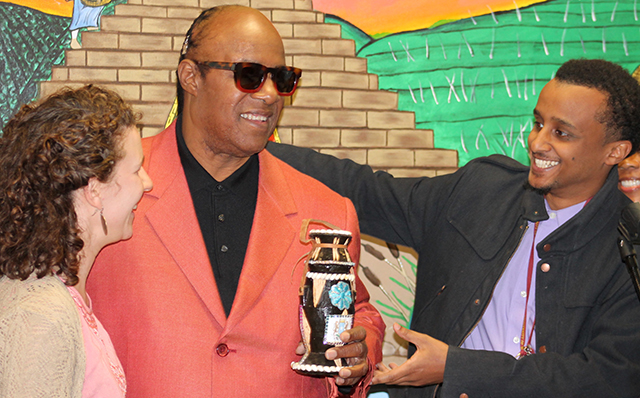 Wonder didn’t mention any of the presidential candidates by their names, but he hinted that he was voting for Clinton. “I’ll just make it very real; I think that men have messed it up long enough,” Wonder said, speaking of the past U.S. presidents. “So, I’m going to vote for a woman this time.”

He continued: “I encourage all of my conscious people, whatever color you might be, to vote with the consciousness of moving this country forward. We’re already great. We’re just going to get greater.”

After his call for unity and his encouragement to participate in the electoral process, Wonder did what many expected him to do at the event: He performed.

To many East-Africans in the packed room, Wonder was no stranger. “His music is a household word in Somali, Kenya, Ethiopia and many other countries in Africa,” said Abdirizak Bihi, a longtime community activist, of the musician.

So, when Wonder began singing one of his most successful songs, “I Just Called to Say I Love You,” — which he released in the ‘80s — the crowd cheered and chanted the lyrics. 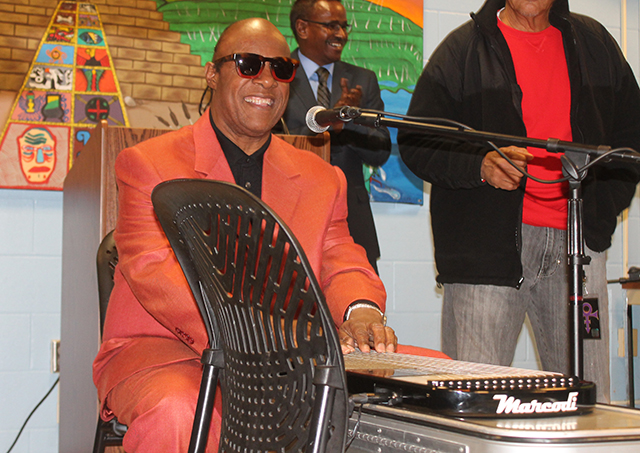 MinnPost photo by Ibrahim Hirsi
Stevie Wonder performing “I Just Called to Say I Love You” at Brian Coyle Center in Minneapolis.

After the performance, when Wonder was about to be led out of the door, Sarah Larsson and Mohamoud Osman Mohamed from the Somali Museum of Minnesota gave him a thank-you gift: a traditional wooden crafted container, or dhiil, which Somali nomads use for preserving milk.

“The Somali museum is devoted to preserving and celebrating Somali creativity, which is inherently part of the African diaspora,” Larsson said. “So, we want to present it to you in recognition of our shared mission to spread art and to spread love.”