A historic grain elevator complex near the University of Minnesota campus is likely to be demolished by the end of the year.

A committee of the Board of Regents debated the demolition for nearly an hour Thursday before voting 5-1 to authorize university staff to move ahead with demolition. The committee did include a requirement that the university investigate some method of preserving the story of the Electric Steel Elevator, Co. such as saving one or more of the silos. The complex is planned to be replaced by student sports fields and a “sports bubble” to allow for winter usage.

The university is to look for ways to “display and interpret the property’s historic significance,”  the resolution states. The committee action will be considered by the entire board Friday and is expected to be approved. . (UPDATE: the full board approved the demolition at its Friday meeting.)

The decision came over the objections of the neighboring community council and nearly 100 people who wrote letters and emails objecting to the demolition. The elevator complex is considered eligible for placement on the National Register of Historic Places, which requires the university to look into adaptive reuse and to mitigate the loss via a collection of information and photos. In addition to that work, the university has said it will donate artifacts and equipment from the grain elevators to the Mill City Museum.

The Minneapolis city council had denied a demolition permit to a private owner and put the complex under interim protection while city staff prepared a nomination for the city register. That study was cancelled and the interim protection ended last month.

Electric Steel, which was closed in 2013, is considered significant because it is made of steel, a construction method used for grain elevators in the early part of the 20th Century but discontinued when concrete became the preferred method. It is the last steel grain elevator in Minnesota, and one of the last examples in the country.

The complex is also significant because it was designed by C.A.P. Turner, a nationally renowned structural engineer. Gayla Lindt, an architecture instructor at the U of M, noted that the university has gone to great expense to renovate its own buildings, including Pioneer and Tate halls, but doesn’t seem to have the same affection for buildings that weren’t university buildings and only recently acquired.

“Pioneer Hall is not, and will never be, nationally significant; nor would Tate,” Lindt wrote. “They are important campus buildings, yes, but relatively inconsequential on a national or even global stage. By contrast, the Electric Steel Elevators are globally distinct structures that contribute in powerful ways to the unique sense of place that is the Twin Cities campus. They are iconic structures that signify how this region is distinct from all other regions in the world.”

The area is also the proposed site for a World’s Fair, something being pursued by a state group for 2023. In a letter to the university, Thomas Fisher, an architecture professor at the U of M who is the university’s representative on the EXPO 2023 group, said the state has a good chance of being chosen. “This suggests that we should not expend money on the EXPO site until we know what will be needed and how the EXPO planners will use the existing elevators and silos,” Thomas wrote.

University real estate and facilities staff have been working on a plan that would involve the demolition of the elevator complex since it was purchased last fall. The historic steel elevators (along with a neighboring concrete elevator) will be taken down and new student sports fields — including the bubble — built on that site. The university would then put a new competition track and field center on the current site of the recreation sports bubble. 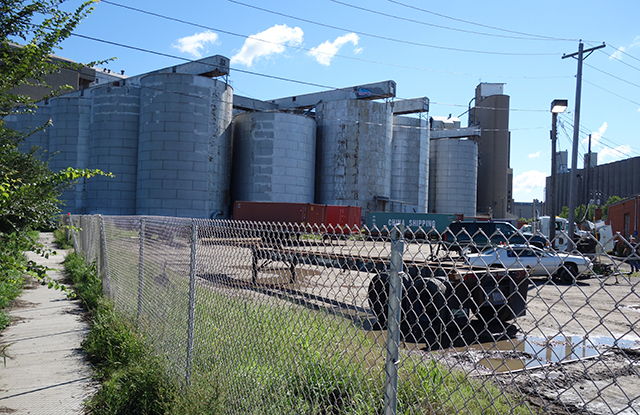 MinnPost photo by Peter Callaghan
The elevator complex is considered eligible for placement on the National Register of Historic Places.

That timeline had senior university staff questioning whether looking for ways to preserve parts of the elevator complex would delay the projects. Demolition could begin in a month and a half. That time schedule caused one regent to vote no. Darrin Rosha, of Independence, said the university should take enough time to consider how to integrate some of the current structure, even if it means delaying moving the sports bubble.

And Regent Peggy Lucas of Minneapolis said she supported the resolution but didn’t want staff to consider saving some portion of the complex optional. “If we give it our best shot and consider what the best way to do it is, I can support that,” Lucas said. “I would be reluctant to support it if in fact it’s an option to come back and say ‘gee, too bad,’ because I think it’s too big a resource to just take to the landfill.”

One other factor could delay demolition. Amanda Gronhovd, the state archeologist, wrote the regents to inform them that the site might come under the protections of the Minnesota Field Archeology Act.

“Because of its historical significance, and use history, this site … has the potential to contain important archaeological resources relating to Minnesota’s industrial past,” Gronhovd wrote. She said the university must contact her office before demolition or earth moving to determine “whether the project will adversely impact a potentially significant archeological site.”

U of M committee votes to tear down historic grain elevators