Have you bookmarked RealClearPolitics’ electoral college map? Do you check it every day to see whether Hillary Clinton or Donald Trump has gained ground in the polls?

If you answered yes, and you’re a Minnesotan, you might be a bit puzzled. You might ask yourself why Minnesota, which has voted Democratic in presidential elections since 1976, shows up not red, not blue, but gray — a toss-up state — in an election year where the Republican contender is believed to be especially unpopular here.

It’s not just RealClearPolitics. There are several election forecasters that have had Minnesota listed as less than true blue this election. On Nate Silver’s FiveThirtyEight, Minnesota is a state to watch, though as of publication Thursday morning, it gave Clinton an 88 percent chance of taking Minnesota (slightly less than Wisconsin, Michigan and Pennsylvania). On the Washington Post’s The Fix, Minnesota is leaning, but not safely, blue. The Louis Jacobson/Governing magazine map changed Minnesota’s rating from likely Democratic to lean Democratic on October 5, calling Clinton’s margins “relatively narrow.”

Of course, this could all change, and fast, in light of the leak of Trump’s lewd comments on Friday and however voters process the presidential debate, the full effects of which likely haven’t shown up in the polls yet.

Each of these forecast and poll aggregating sites has its own methodology, but few seem to regard Minnesota — the state that currently has the longest-running Democratic presidential voting streak — as “safe Democratic” in this race, like some analysts believe Washington, Oregon, New York and California are.

RCP calculates its bellwether RCP average by averaging polls. For Minnesota, it’s currently only averaging three September polls of likely voters. The first, by Gravis/Breitbart, has Clinton and Trump tied. KSTP’s poll had Clinton up by 7, while the Star Tribune’s had Clinton up by 6.

That’s not a whole lot of data to go off of, compared to the number of polls in other states. If you add those numbers up and divide them by three, you get the polling average, which gives Clinton a 4.3 percentage point advantage over Trump in the state.

RealClearPolitics managing editor Emily Goodin said the site considers information about how the electoral map is constructed — including why some states are toss-ups and why some polls are included but not others — proprietary. But states where either candidate has an average poll margin of victory under 5 or less are toss-ups, and states where the candidates have larger margins are generally in the red or blue camps.

Whether that Clinton +4.3 number will move will be a function of whether newer polls show the Minnesota electorate swaying one way or the other, and if they do, whether RealClearPolitics includes them in their average.

This year, Minnesota has seen relatively few polls — and David Byler, an elections analyst at RealClearPolitics, said he wouldn’t necessarily count on pollsters spending a ton of time here.

“So far, we haven't had a lot of polls out of Minnesota, and the fact that the race is currently not close nationally means that it might be less interesting to poll than some other states that might now become close,” he said, noting that he’s not involved in RealClearPolitics’ electoral map.

FiveThirtyEight has had a lot of success predicting elections based on statistical modeling. The website, run by statistician Nate Silver, collects polls, weights them based on past accuracy and the rigor of their polling methodology, and in one model, adds into consideration demographic information, like past voting and economic conditions.

On Oct. 28 in 2012 — about a week and a half before the election —  FiveThirtyEight predicted Obama would win by 6.8 percentage points in Minnesota, “a state that we have given little attention this year.” That’s still weeks from now in election time (we're about three and a half weeks out and polls usually tighten as the election gets closer), but was a little less than Clinton was expected to beat Trump by as of Thursday. But Romney spent more time here, had less baggage and was thought to be better-liked (as was Obama compared to Clinton) among voters compared to Trump.

Obama ultimately won by a 7.7 percentage point margin — smaller than his 10-plus point margin of victory in Minnesota in 2008.

This year, FiveThirtyEight calls Minnesota a state to watch. As of Thursday morning, FiveThirtyEight predicts Clinton will win with a 8 percentage point margin — a number that has gone up in recent days — in Minnesota and gives her an 88 percent chance of taking the state.

There are a few reasons Minnesota might be seen as a swing state, wrote FiveThirtyEight writer and analyst Harry Enten in an email. “First, in most recent elections it's been fairly close to the national vote. In 2012, Obama won by 8 as he won by 4 nationally. That's not like in a blue state like Massachusetts where Obama won by over 20 percentage points. On that basis alone, we'd expect the state to be fairly close if the election were close.”

These polls may reflect an underlying change in Minnesota’s electorate: according to one trusted measure of a state’s partisan leanings, Minnesota has become less blue in presidential elections, relative to all U.S. states, over time.

That measure is the Partisan Voting Index (PVI) by the Cook Political Report, a nonpartisan organization that analyzes U.S. elections. This year, Minnesota’s PVI is D+2, which means it’s thought to be 2 percentage points more Democratic than the rest of the U.S. is, on average. In 1994, Minnesota was D+6, but dropped to D+4 in 1998 and D+3 in 2002. In 2006, it dropped to D+2, where it has remained ever since.

“It’s been turning redder, even though Republicans haven’t been winning in the state,” Byler said. “I think of it a little bit similarly to North Carolina, because North Carolina is, according to the Cook Political Voting Index, R+3. When you have a big enough Democratic margin, (they) can peel it off.” (Obama won North Carolina in 2008, but lost it in 2012.)

Remember, too, that despite its track record on presidential elections, Minnesota isn’t all blue. The Minnesota governor’s office and the state House and Senate have switched party control in recent years. Minnesota’s congressional delegation is split, though weighted toward Democrats — there are five Democrats and three Republicans in the House and two Democrats in the Senate.

If this were a different year, we might expect to see the Republican and Democratic presidential candidates running closer to neck-and-neck. If a strong Republican candidate ran for president, Byler thinks they’d have a shot of breaking Democrats’ winning streak in Minnesota.

That candidate is probably not Trump: while it makes sense that Minnesota, as a less racially diverse state, would be a target for a Republican candidate (Minnesota is 85 percent white, and white people have become more solidly Republican in recent years, according to Gallup), Trump has struggled to make inroads with white, college-educated voters, of which there are many in Minnesota, Byler said.

How votes are changing based on college degrees and race — both predictors of how people will vote — is something FiveThirtyEight has been looking into. 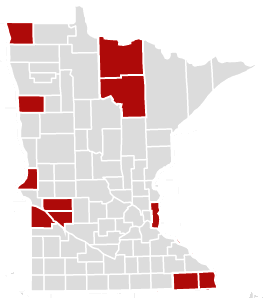 FiveThirtyEight
Under FiveThirtyEight’s vote-swap scenario, Trump could make gains in several Minnesota counties, though it wouldn't likely be enough to flip the state into the red column.

If that happened, several Minnesota counties would flip from blue to red, diminishing Clinton’s margin of victory in Minnesota.

“Trump's strength is with white voters without a college degree,” Enten wrote. “That's where he's doing better than Romney. There are a lot of those in Minnesota (especially up in the Iron Range). Therefore, there's at least a decent shot he'll pull closer to his national numbers in Minnesota. That would result in a close race in Minnesota if the election nationally is close.”

Any changes in the way Minnesotans are voting probably aren’t enough to flip the electoral votes because she’s up by so many points, at least for now. The two most recent polls conducted in Minnesota — one by Google Consumer Surveys and another by CVOTER International — which were conducted through Sunday, show Clinton leading by more than those same polls conducted previously.

Clinton has consistently been leading in the polls in Minnesota, said Michael Cohen, adjunct professor and chief data scientist for the PEORIA Project at George Washington University’s  Graduate School of Political Management.

“That’s something I look at as a pollster — is it going up and down?” he said.

Despite the changes to the partisan leanings of Minnesota’s electorate, for it to become a true battleground state this year, “something extraordinary is going to have to happen on the Clinton side,” Cohen said, pointing to a possibility of something that could sway the electorate coming out of WikiLeaks, which has been releasing a steady stream of hacked Clinton emails, or a comment like Romney’s 47 percent one in 2012 that would “reinforce everyone’s view of her in a very negative way.”