The election is less than two weeks away, and voters across Minnesota are opening their mailboxes to find it overflowing with political mailings.

Despite all the advancements in technology, mailers remain one of the most cost-effective ways to target specific voters in legislative races. They can be sent directly to the homes of registered voters, ensuring the message is delivered. And they can also be sent to targeted lists, with a message tailored based on information collected from polling data or focus groups.

While the mailers will always end up in the intended mailbox, how do organizations sending the mail get voters to actually read them? And, more important, how do the designers of the mailing make sure the voters are motivated to vote based on the information delivered?

I’ve been involved in the design of hundreds of different political mail pieces in the last 20 years, and I’ve seen how they can make or break a legislative campaign.

It is a complicated process, probably more complicated than people realize, involving polling, message development, mail design, and voter targeting — all aimed at getting the right message to the right voters at the right time. And in recent years, as it’s become more expensive to mail the messages, more emphasis is placed on the overall design, with campaigns and political organizations focused on legislative races now producing the sort of high-quality mail pieces that were once only seen in presidential or statewide campaigns.

So what makes for a good one? Well, for me, one example of a particularly effective mail piece this cycle is from the Minnesota Action Network, a political action committee chaired by former U.S. Senator Norm Coleman that has been sending mail targeting key members of the Minnesota Senate DFL Caucus over their past support of MNsure. 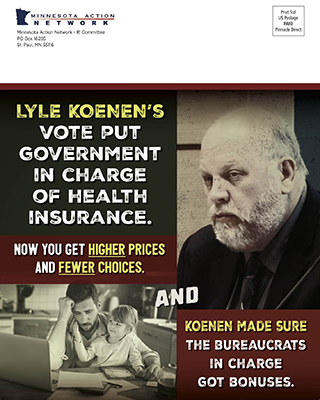 In the last few weeks, of course, the state-sponsored health-care exchange has become the top issue in legislative races, as Minnesotans who purchase coverage through the exchange learned they are facing premium increases of more than 50 percent.

The mail from Coleman’s group targets numerous DFL senators, including State Sen. Lyle Koenen, who is featured in grainy images while sitting in committee hearings at the Minnesota State Capitol, squinting or with his glasses on the end of his nose. Along with the pictures of Koering, there is also a picture of a father sitting with his daughter, presumably struggling to figure out how to pay for the rising costs of the family’s health care. 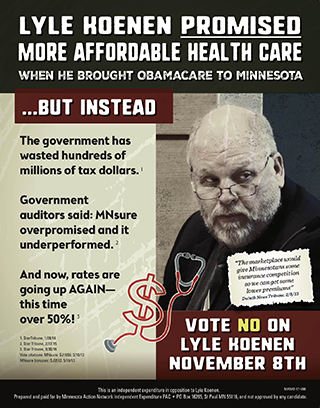 Political mailings are designed to create an emotional reaction, and the father-daughter image — juxtaposed with the images of Koenen looking menacing — is what makes this mailing so effective.

It helps that the DFL’s reaction to the health-care issue seems like it was tailor made to prove the mailer’s point, with Senate Majority Leader Tom Bakk calling for a special session and specifically raising concerns about Minnesota families’ ability to pay for the rise in premiums.

Indeed, success in politics is all about timing, and Minnesota Action Network’s message on MNsure works so well because it’s being validated every day with information in the news — a critical component in the success of most paid political messages.

MNsure is likely to remain the top focus of legislative campaigns, because of the daily developments at the Capitol, but also because of mailings put out by the likes of Minnesota Action Network.

Will it work? We’ll know in two weeks.

Why some political mailers are so much more effective than others