In the days and weeks leading up to the election, Minnesotans filled social media with pictures and posts about voting early.

All this fanfare around early voting is new for Minnesotans: this was the first presidential election in which they could vote absentee without an excuse, thanks to a law passed in 2013 designed to make voting more convenient, and a law passed in May that allows voters to feed their ballot into a tabulating machine at a voting center up to a week before the election.

Ultimately, nearly one in four Minnesotans who voted did so before Election Day, according to the most recent numbers from the Minnesota Secretary of State.

This election was Minnesota’s first real test run of early voting (In 2014, there was no presidential election and turnout was relatively low). How did it go?

One thing’s for sure, said Minnesota Secretary of State Steve Simon: Minnesotans seemed to like having the option to cast ballots early.

In 2012, before the no-excuse absentee reform passed, just 9 percent of Minnesotans voted absentee. This year, more than twice that share of voters did.

“People were excited by this option — this choice, this new way to vote — and really took to it … not just took to it, but were perhaps persuaded to vote where they otherwise might not,” Simon said.

It’s tough to put a number on how much early voting actually affected turnout here. The state was already really good at voter turnout. For ten of the last 11 election cycles, Minnesota has walked away with first place among U.S. states in terms of the percentage of eligible voters who voted in the election.

As of Tuesday morning, 74.7 percent of eligible Minnesota voters turned out to vote, one way or another, in last week’s election, according to the Minnesota Secretary of State. That’s lower than Minnesota’s turnout in 2012 — 76.4 percent, but overall turnout nationally was lower in 2016. In 2012, an estimated 58.6 percent of eligible voters in the U.S. voted, compared to 58.1 percent this year, according to the United States Elections Project, a website where University of Florida political science professor Michael McDonald tracks voter turnout.

In recent decades, many states have reformed voting laws to make it easier for citizens to cast ballots. Today, no excuse early voting is available in 37 states and the District of Columbia, according to the National Conference of State Legislatures.

Studies show mixed effects of early voting on turnout, said Barry Burden, a professor of political science at the University of Wisconsin-Madison. Some find no effect, and many find negative effects. Others have found early voting increases turnout by between 2 and 4 percent.

While voter turnout this year was down from four years ago, it could have been down more without early voting: In his research, Burden has found that a combination of early voting and same-day registration like Minnesota has would be more likely to increase turnout.

But in Minnesota, does early voting just make it easier for people who were already going to vote to do so, or did it encourage people who wouldn’t have otherwise voted to cast a ballot? 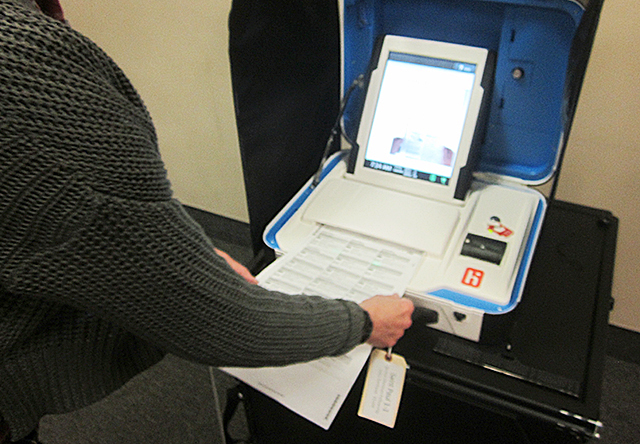 MinnPost photo by Corey Anderson
An election volunteer feeding a ballot into a voting machine in St. Paul.

Simon doesn’t know yet — his office is working comparing voter records to early voting, to see if many of the people who voted early and are old enough to have voted in the last election are new to voting.

Minnesota can probably expect more people to vote early in the future as more of its citizens become accustomed to the process. After early voting reforms are passed, about 10 to 20 percent of voters in a given state tend to vote before Election Day, researchers have found. That number often climbs quickly in subsequent elections.

In Wisconsin, where no excuse absentee voting has been available since 2001, a fifth to a quarter of voters generally cast ballots by that method, a number that has increased over time, Burden said.

This presidential campaign was filled with turbulent events — almost right up to Election Day, from the Access Hollywood tape leak that exposed lewd comments made by Donald Trump to Hillary Clinton’s email woes. And Minnesotans were voting throughout many of them.

Whether or not that changed the outcome of the election in Minnesota is anyone’s guess. Unlike some states, Minnesota doesn’t have party registration, so it’s tough to tell who was helped or hurt by early voting.

High early voting numbers are often taken as a good sign for Democrats. But this year, while early voting tended to be up across U.S. states, Democrats didn’t do as well as some expected, Burden said.

Minnesota has one of the longest early voting periods of any state — 46 days. According to early voting statistics from the Minnesota Secretary of State’s Office, the number of early votes cast and accepted, including ballots in mail-only precincts, rose at a steady pace from the time early voting started until Election Day.

Technically, Minnesotans who vote early and then change their minds can ask for their ballots back, and fill out a new one, until seven days before the election, Simon said.

But for the most part, early voters are the most enthusiastic voters — they tend to be very educated, very partisan and older, Burden said. In that sense, they might not be as likely to change their minds as other types of voters.