A master developer likely won’t be chosen until 2020, and construction won’t begin until 2021, but after 10 years of talking and meeting and planning, St. Paul finally has its first glimpse of what the former Ford plant site will look like when it grows up.

With the appropriately bureaucratic title of the “Zoning and Public Realm Plan,” the City of St. Paul released a document last week showing where streets, parks and open space might be placed inside the 135-acre site on the Mississippi River. It also details which sections of the property, which is still owned by the Ford Motor Company, will be set aside for commercial offices, mixed use, multi-family residential and even “mansion-style units” along Mississippi River Boulevard.

As created by St. Paul planners — after numerous studies and dozens of community meetings — the document centers on an interactive centralized stormwater collection and retention system. Rain and snow collected on the property would be directed toward a large water feature edged with trails and green space. The collected water would flow toward Hidden Falls before reaching the Mississippi.

Unveiled at a public meeting, the plan now enters into the public input phase. After the public comment period, it will be revised and then reviewed and likely approved by the St. Paul Planning Commission before reaching the city council next summer.

“Somebody asked me, ‘What do you want from the Ford site,’” Mayor Chris Coleman said during a rollout of the plan last week at St. Thomas University. “I said, ‘I want everything. I want this to be our everything.’”

Ford announced in 2005 that the plant, formally known as the Twin Cities Assembly Plant, would be closed. The final vehicles from the plant were assembled in 2011, and it thereafter became one of the 267 auto-related factories closed in the United States between 1979 and 2011.

But the St. Paul Ford site has advantages many of those shuttered facilities didn’t. Rather than being in an industrial area, for one, the Ford site sits on the bluffs near the Mississippi River, where it has come to be surrounded by residential neighborhoods, including some of the most affluent in St. Paul.

As Coleman frequently points out, the site is equally close to downtown St. Paul, downtown Minneapolis and, via the Ford Avenue Bridge, the Minneapolis-St.Paul International airport. “This is gonna be the center of the future of the Twin Cities if we do this right,” he said.

Ford has retained ownership of the land, and is overseeing site clearing and cleaning up environmental damage from assembly operations. The company then intends to put the entire site on the market next year in hopes of finding a master developer who will take on the massive project. That developer’s work will be guided by city zoning and infrastructure plans, but Ford has expressed support for the types of uses the city wants for the site — low-to-medium-rise residential and commercial development. 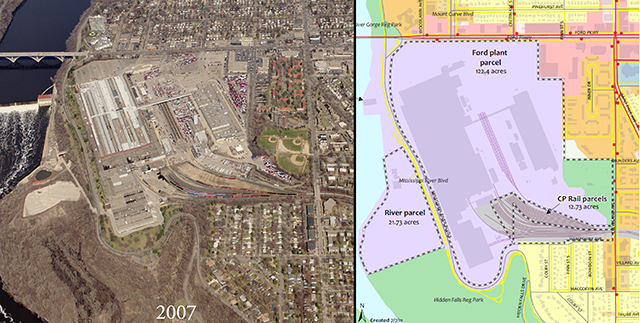 Planners estimated that once built-out, the site would be home to as many as 4,000 residential units and 1,500 jobs. Those densities are needed not only to attract the restaurants and retail amenities that urban residents want, but to give Ford a return on the investment it’s making in demolition, environmental cleanup and site preparation. “The demand will be strong if the neighborhood is strong,” Coleman said.

The plan foresees about 63 of the 135 acres being developable. Of the remaining acreage, 33 acres would be taken up with transportation infrastructure, nine acres for stormwater management, 15 acres for parks and open space and 15 acres for “recreational fields,” which refers to a city promise to allow the private groups that currently operate baseball and softball fields on Ford property to continue to do so.

Building heights would be lowest nearest the river and gradually increase the further property is from the river. That fits in with the Mississippi River Corridor Critical Area plan, which does not favor buildings causing a visual impact on views from the river.

How flexible is the plan?

Must the master developer follow this exact plan? That is, can they only build what the zoning plan lays out?

The city expects to build the streets and stormwater infrastructure, so it has a lot of say over where that is placed on the site. And the zoning would be binding on any developer.

But Merritt Clapp-Smith, the principal planner for the City of St. Paul, said the city expects to be flexible to allow a developer to shape the eventual build out. “One of our partners from Michigan said, ‘You’re not gonna take all the fun away,’” Clapp-Smith said about showing Ford the plans. “Someone who comes in is still gonna want some fun and have some great ideas.” 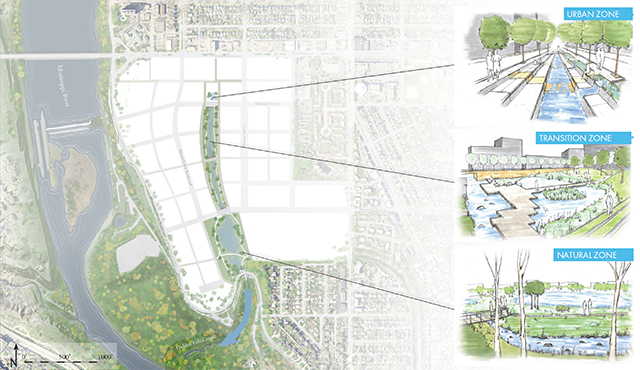 “What you see here looks kind of concrete,” she said. “But within all of it there’s so much flexibility left in terms of how each block can develop and styles. And you can do different things with heights.”

Left undecided is how the city would pay for the infrastructure. There are no roads through the site now, no sidewalks, no streetlights, no trails, no stormwater management system. And while the city expects tax revenues to increase greatly as the property is redeveloped, it has not decided whether some form of tax increment financing will be used to cover up-front costs.

For all of the site’s pluses, access to regional transportation infrastructure is not one of them. It does have quick access to the airport, but cars and buses must move through residential neighborhoods to get to Interstate 94 and Interstate 35E. That has made neighbors anxious that whatever is built at the site will add to traffic congestion.

Those concerns have led city planners to emphasize alternatives to single-occupancy vehicles, asking consultants to look for ways to enhance transit, bike riding and walking in the area. In fact, part of the direction given transportation consultant Nelson Nygaard is to “rely on 21st century transportation planning principles to create a new place.”

To encourage such alternatives, a city transportation plan — also unveiled last week — calls for streets and roads within the Ford site to accommodate cars but not encourage driving at the expense of transit, biking and walking. Many pathways will be solely for walking and biking. Surface parking lots will be minimal and parking would likely be in ramps that serve multiple buildings. 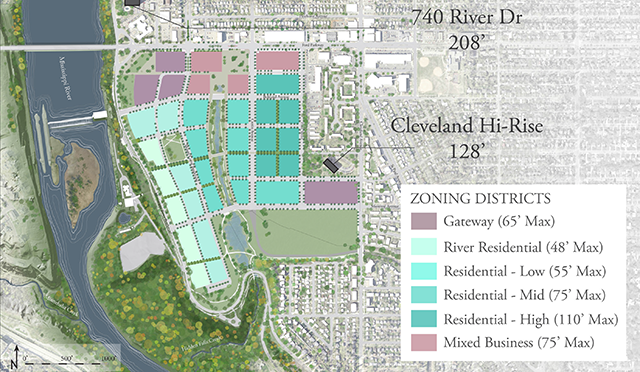 While there needs to be improvements in the surrounding neighborhoods at key intersections for cars and along off-site streets to better accommodate bikes and walkers (most get poor grades now), the city plan calls for no new traffic lanes in the area. The roads and lanes within the site will mostly follow the grid pattern that grew over the years in the neighborhoods to the north and east.

St. Paul doesn’t control the quality and quantity of mass transit around and through the site, however, though it does expect that roadways will be designed to accommodate it. Metro Transit routed its first arterial bus rapid transit line along Ford Parkway and there is a chance that the Riverview Corridor light rail transit line could pass through the site as well. The Canadian Pacific railyard, adjacent to the Ford property, could also be used to bring light rail to the site before it crosses the river on its way to the airport.