Deep into the fight of his political life, Rep. Rick Nolan was standing at the spot where he revived his career after a four-decade hiatus.

On a clear, cool Wednesday morning, Nolan, the 8th District Democratic incumbent, addressed his most dedicated volunteers at the Labor Temple in Duluth, a central organizing spot for the AFL-CIO and other labor unions that run strong in this part of Minnesota.

“This place has special memories for me,” Nolan told the two-dozen or so DFL die-hards eating chicken and mashed potatoes in a low-slung room loaded with signs saying “Nolan: Our Congressman.”

Nolan, who served in Congress for three terms in the 1970s, came to the Labor Temple to seek support early on in his 2012 campaign to return to Washington.

“I gave a talk and I see some of the same faces here,” Nolan said. “But when it was all over, one of you guys came up and said, ‘We’re going to support you Nolan, and I’m going to tell you why.’ And I said, ‘Why?’”

“He said, ‘I think I saw that guy behind you give a little smile of approval.”

Nolan gestured to the man in the portrait directly behind him: Paul Wellstone.

Maybe the man was on to something: Nolan won that year, and narrowly won re-election in 2014. But he may need more than a little Wellstone magic this time around.

The 72-year-old from Crosby again faces Stewart Mills in what is officially the most expensive U.S. House contest in the nation: Combined, each campaign and outside groups have spent a total of $19.7 million.

If he’s to win for a third time, it will be on the back of a tried-and-true campaign strategy that relies on the strength of the old-school institution to which Nolan was paying homage that day: the labor union.

Lt. Gov. Tina Smith, warming up the crowd in Duluth, called this kind of thing, the hard work of politics, Democrats’ “secret sauce.”

Can Nolan’s traditional approach — the “secret sauce” — again deliver him a win?

Northeastern Minnesota in the national spotlight

Less than a week from Election Day, Minnesota’s 8th District has more than lived up to its billing as a true toss-up race — an indication of how much this region has changed, and how quickly.

Northeastern Minnesota’s generations-long loyalty to the DFL is the stuff of state political legend. The 8th District has been represented by a Democrat since 1947, with the exception of Republican Chip Cravaack’s one term, from 2011 to 2013.

St. Louis County, which contains Duluth and most of the region’s mining communities, has voted for a Democratic presidential candidate every cycle since 1932.

But things are changing. The district includes the northern exurbs of the Twin Cities, which skew conservative, and are growing faster than the rest of the district. What was once a solid-blue district is now purple.

It is also a place where Donald Trump’s calls to make America great again resonate. The GOP nominee inveighs against the free-trade deals and regulations that many here believe have sent away thousands of the region’s mining and manufacturing jobs.

Hillary Clinton, meanwhile, is particularly unpopular here; Nolan says most polling shows Trump with a 10 to 15 point lead over Clinton in CD8. 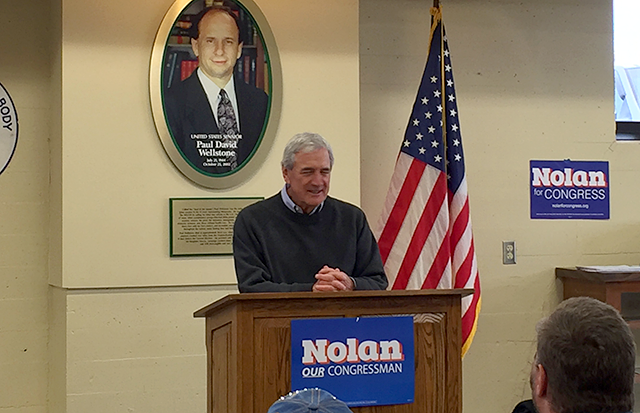 MinnPost photo by Sam Brodey
Rep. Rick Nolan speaking to constituents at the Labor Temple in Duluth on Wednesday.

The conventional wisdom is that presidential-year turnout benefits Democrats, but with Trump commanding enthusiasm in the 8th, Mills — who has enthusiastically backed the GOP nominee — is hoping to ride that wave.

The 44-year-old Republican has sought to link Nolan to Clinton, and to use the area’s DFL heritage as a weapon against the incumbent. Mills has run ads featuring a “lifelong DFLer” who is supporting the Republican candidate, not Nolan.

Nolan himself prefers not to discuss Clinton, or Trump, and is instead deploying a very traditionally Democratic pitch to voters, heavy on preserving entitlements and protecting the middle class. (The RV in which he canvasses this West Virginia-sized district is named the “Middle Class Express.”)

When engaging with the numerous Trump supporters in his district, though, Nolan tailors his message. With them, he brings up his work for the district: convening leaders to help put miners back to work, for example, or pushing for legislation to get big rigs off Superior Street in Duluth and onto I-35.

“We have worked really hard taking care of the district, being able to reach across the aisle, finding good and common-sense solutions to the common problems we have,” Nolan said.

Some worry, though, that a Trump tide and shifting attitudes could sweep Nolan away, no matter how hard he works.

His last and best defense, is labor. He has locked up the endorsements of the major unions in northeastern Minnesota, and while labor is a crucial constituency to any Democrat, there are few congressmen who need them more than Nolan does.

Before Nolan’s Middle Class Express arrived in Duluth, state Rep. Jason Metsa, in jeans and a black hoodie, was sitting on a plastic chair poring over a thick stack of voter information. The 100-plus pages held rows of names of potential CD8 voters, where they lived and their union affiliation.

Contemporary campaigns, from the presidential level on down, have come to thrive on sophisticated online targeting techniques, which aim to get the perfect ad in front of just the right eyeballs.

To Metsa, who represents the Virginia-Eveleth area and is working hard for Nolan, that’s not the key to victory in the 8th. “We’re not big on social media,” he said. An essential element of Nolan’s strategy he described in the nomenclature of labor: “We’re big on work-site conversations, members talking to other members.”

“We know it works,” he said. “It worked back then — real conversations with real people. We wouldn’t be doing it if it weren’t tried and true.”

CD8 is also the oldest Minnesota district; residents are an average of 43.2 years old, and a quarter of them are over 60.

After Nolan’s speech, a handful of volunteers sat in a small office in the Labor Temple, attempting to have those real conversations. Posters showing the virtues of the labor movement lined the walls, as did brightly-colored home-made motivational signs. (“Always remember the big picture!” “Never Trump, Never Mills!” “Stay positive.”)

With some voters still undecided, the volunteers made calls based on information in the AFL-CIO’s database, armed with script suggestions and basic information about the voter and how past calls to them had gone.

Mary Jo, a woman in her 60s, was calling a voter — a 71-year-old woman from Hibbing, per the database — who a prior volunteer indicated was still undecided.

“The last time a volunteer called, you said you were undecided,” she said, after introducing herself. There was a pause, and a “mhm.”

“I want you to know, one of the reasons we’ve endorsed Rick Nolan is his strong stance on Social Security,” she said. Another pause. “I just wanted you to know that.”

Later, Mary Jo said the caller was waiting to talk to her husband about her vote. On a nearly identical call later, the targeted voter said she had made up her mind — for Mills.

But the volunteers believe this approach is crucial to a Nolan win, even if every person-to-person conversation doesn’t go their way.

A prominently displayed sign on the wall offered a goal: make 42 calls every hour.

Nolan is aware of the big, time-consuming effort his volunteers and his allies in labor are making. “We’ve reached a lot of people,” he said, and added efforts have gotten more sophisticated over the years. “All year long we concentrate on persuadables and persuading them why they should vote for Rick Nolan, and then now we shift here the last four-five days to getting everyone we’ve persuaded to show up on Election Day.”

He laughed a little there, recognizing that task is much easier said than done.

Who actually shows up on Tuesday, Nolan said, “is the one thousand dollar question.”

Public polling for the race, conducted by KSTP and SurveyUSA in October, showed Mills up four points on Nolan, which was within the margin of error; it had Trump with a 12-point lead over Clinton.

Minnesota political observers have noted that Nolan has been campaigning like an underdog, not an incumbent, which he freely admits to. “We always campaign like we’re four or five points behind anyway,” he said, though he added he is as optimistic as he’s ever been for the toughest race he’s yet had.

“If the TV and ad stuff becomes a wash, then what does matter? People,” Nolan said. “Talking to people. Working people talking to working people. Friends talking to friends.”

At that point, Nolan’s handlers began the process of ushering him back to the Middle Class Express to get to their next event, greeting workers at a shift change at the ME Global foundry in southern Duluth.

But Nolan — physically unable to pass up the prospect of working a room — greeted volunteers on his way out and asked how things were going.

“We’re going to get you this one yet,” a young man wearing the yellow polo of the local United Food and Commercial Workers Union told the congressman as his staff hurried him out.

Nolan gave him a pat on the arm, and said as he headed for the door: “This one’s for us.”

Correction: A previous version of this article misstated how the 8th District has been redistricted.