Speaker of the Minnesota House Kurt Daudt has Donald Trump to thank — at least partially — for handing his Republican caucus one of the largest House majorities ever assembled during a presidential year.

It was a bizarre turn of events. Just a month ago, Daudt denounced the GOP presidential nominee after a recording surfaced of Trump saying he inappropriately grabbed and groped women. At the time, Daudt had a majority to defend in the Minnesota House, but as polls closed and results came in on election night, Trump rolled toward victory. And so did Republicans down the ballot from him.

“We have the highest number of members ever, at least in recent history, after a presidential election,” Daudt told reporters at the Minnesota GOP’s party at the Radisson Blu in Bloomington just after midnight. Democrats tend to pick up legislative seats in presidential years in Minnesota.

Around the same time, at the Hilton hotel in downtown Minneapolis, DFL election party crowds were thinning out, with some despondent activists sobbing and holding each other. Democratic nominee Hillary Clinton was on her way to losing, the Minnesota House was firmly in Republican hands, and the Minnesota Senate would eventually fall out of Democratic control.

Steve Cwodzinski was getting ready to go home for the night and didn’t know what to make of anything. He had just toppled Senate Republican Minority Leader David Hann in a shocking upset in Eden Prairie, but his victory was one of the only bright spots for Democrats in Minnesota.

“I don’t know the words,” said Cwodzinski, a recently retired Eden Prairie government and American history teacher. “This was just surprising to me. I just never thought.”

When the dust settled on the 2016 election, sometime after 3 a.m., Trump wasn’t the only big winner of the night. Minnesota Republicans walked away with 76-57 majority in the House, up from 73 seats before election night, while Senate Republicans surprised everyone and flipped the chamber by one vote, 34-33, toppling several senior Democratic senators in rural Minnesota to get there. Democrats went into the election with a 10-seat advantage.

At the top of the ticket, Hillary Clinton and Tim Kaine barely eked out a victory in Minnesota, a state that hasn’t voted for a Republican presidential candidate since 1972.

“People don’t understand that a campaign about law and order and our economy is what people are asking for,” said U.S Republican Rep. Tom Emmer. “They want to be heard. This is about the forgotten man and the forgotten woman that are being expected to carry the weight for everyone else. They’re asking for someone to hear them. They want everybody to succeed, but not at the expense of their success.”

The Republican crowd that gathered in a packed ballroom at the Radisson Blu was buoyant all night as Fox News hosts projected wins in critical states across the U.S.: Ohio, Florida, then Wisconsin and Pennsylvania. Partygoers intermittently erupted into chants of “U.S.A., U.S.A.” and “Lock her up.”

Eva Norman, of Champlin, stared at her phone, refreshing social media feeds to see if what was being reported was really true — that Trump was winning. Born in Peru, Norman has been a Minnesota resident for 16 years, and she said she supported Trump’s candidacy from the beginning. With what she felt was a lack of support for Trump from the Republican National Committee and media outlets, she didn’t expect this kind of news.

Earl Luckes and his son Steven headed to the Minnesota GOP headquarters on a whim after hearing Trump was winning in key states. They had been driving home to Minneapolis after a screening of “Mad Max” at the Roseville movie theater.

“We heard on the radio it was happening, and I thought ‘I want to be part of the history of it,’” Luckes said.

Small wins for the DFL

Democrats were celebratory early in the night, including DFL Party Chairman Ken Martin, who told the crowd shortly after 8 p.m.: “Based on what we are seeing, it’s going to be a good night for the DFL.” But the enthusiasm waned as results rolled in, showing Clinton trailing heavily in areas that President Barack Obama won easily in 2008 and 2012. 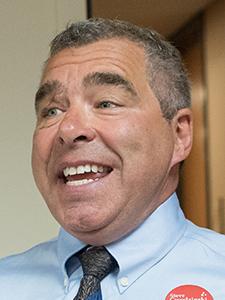 “We have a lot of work ahead of us to heal our divisions and address the frustration felt by so many of our fellow citizens,” DFL Minority Leader Paul Thissen said in a statement. “Too many Minnesotans feel like they don’t have a voice in their government and the well-connected few are getting ahead at their expense. My colleagues and I in the House DFL Caucus understand that frustration. We are ready to fight for a more inclusive, fairer Minnesota where everyone has an opportunity to succeed.”

Cwodzinski wasn’t the only victory for Democrats in Minnesota. They also picked up a conservative-leaning Senate seat in Lakeville, where the area’s mayor, Matt Little, beat Republican Tim Pitcher for an open seat. And the DFL picked up an open seat in Apple Valley, where a Republican retirement made way for Erin Maye Quade to head to the House. They also celebrated the election of the first ever Somali-American legislator in the nation, Ilhan Omar, who easily sailed to victory in Minneapolis’ House District 60B.

“My neighbors, and everyone here in this room, represent what we as a nation want to be: united in our diversity,” Omar said. “Long time residents, East African immigrants and students — we came together and engaged in the political progress. We talked about the issues that concern us and we connected on the future we want to create.”

When it came to Republican legislative victories in Minnesota, Daudt made sure not to give Trump all the credit. Democrats were hit hard by failures in the state’s health insurance exchange just weeks before the election, when premiums for people on the individual marketplace went up by more than 50 percent.

And part of their victory was strategic, he said. Take Republican candidate Dario Anselmo’s victory in an Edina House district. The suburban district has been trending blue for several election cycles and it soundly rejected Trump, but in the final weeks of the campaign, local Republicans hit incumbent DFL Rep. Ron Erhardt hard in television ads and mailers for his conduct on the House floor during a debate about sexual assault. The ad featured a woman who was part of an effort in 2015 to expand the state’s sexual assault laws to include bodily fluids after a co-worker ejaculated into her coffee cup. While legislators debated the issue on the House floor, Erhardt joked about it as he addressed other lawmakers.

“The last three weeks they hit me with a nasty piece, spent thousands of dollars on TV and the postcards,” Erhardt said Tuesday night. “I’m sure it had an effect.”

“For us it really was probably that Democrats in Minnesota have kind of let Minnesotans down, particularly on health care but on many other issues,” Daudt said. “Donald Trump may have been in some areas of the state, but we won in districts like Edina where Trump’s probably going to lose…by 20 points, and we won that district.”

What’s more, Republicans majority could grow in February: There’s a special election on the books in House District 32B, where the courts ruled earlier this year that Republican Rep. Bob Barrett didn’t technically live in the district, which trends Republican.

But the new Republican legislative majorities still have one major roadblock to their agenda in St. Paul: DFL Gov. Mark Dayton. He’s still in office for the next two years, and he knows what it’s like to go head-to-head with an all GOP Legislature. His first two years in office in 2011 and 2012 were opposite a Republican House and Senate.

Early in the night, Dayton said he planned to fight for pre-kindergarten education, “for every child, for every four-year-old,” and for “people of color and people who are GLBT.”

“We are one Minnesota,” Dayton yelled to a cheering crowd. “We are a better Minnesota for having everybody here, and those who don’t like it, go live somewhere else.”

Daudt didn’t go into specifics on the House Republicans 2017 agenda, but he said Americans are “tired of politics as usual.”

“We are going to bring forward an agenda that puts Minnesotans first,” he said. “We want to grow Minnesota’s economy, we want to create jobs, we want to reform health care and make it affordable for Minnesotans.”

Minnesotans also overwhelmingly passed a constitutional amendment to remove the power for legislators to set their own pay. The amendment, which passed with nearly 77 percent of ballot-casting Minnesotans filling in the “yes” box, calls for a 16-member independent commission that will decide on how legislators should be compensated.

It was one of the quietest constitutional amendment campaigns in recent Minnesota history: No groups registered to campaign for or against the amendment, which likely attributed to it’s ultimate success.

The group will now evaluate and set legislator pay every two years. Currently, Minnesota representatives and senators make $31,140 per year — plus per diem and lodging expenses — for a job designated as part time. That hasn’t gone up since 1999 because of the contentious nature of legislators voting to raise their own pay. In the nearly 20 other states withs similar commissions, legislator pay was more likely to increase.

By Briana Bierschbach and Greta Kaul