Jennifer Carnahan thought things were going pretty well with the voter she had engaged on a North Minneapolis doorstep while she was campaigning for the District 59 seat in the Minnesota Senate.

They’d been talking for five minutes or so about issues, including education. Carnahan said she thought the ZIP code of the student shouldn’t determine whether they get a good education or not. The voter agreed.

But then, Carnahan recalled, the voter asked her what party she represented, since the campaign material Carnahan was using didn’t say. When Carnahan told her she was the endorsed Republican candidate in the district, the voter’s tone changed. Significantly.

“Her face started turning red,” Carnahan recalled. “She started tearing up and her body was physically shaking. She threw my postcard on the ground and said, ‘I can’t believe I’ve been talking to you. I hate Republicans. Get the hell out of my yard.’ ”

Carnahan said she apologized and left, a bit shaken. “It just shows that people look more at party than the person,” Carnahan said. “And that’s what’s broken with our political system.”

How she got here

Carnahan, 39, grew up in Maple Grove after she was adopted from South Korea when she was 6 months old. She graduated from Osseo High School before attending Syracuse University, where she received a broadcast journalism degree. She later earned an MBA from the Carlson School at the University of Minnesota.

After working in professional sports and corporate marketing outside of the state, she returned to Minnesota in 2005 and worked in marketing at McDonald’s, Ecolab and General Mills before quitting to start a women’s clothing boutique, first in Northeast Minneapolis, then in Woodbury and now in Nisswa.

Her transition from small business owner to political candidate was inadvertent. She said she wanted to be a delegate to the Republican National Convention in Cleveland. After attending her first GOP precinct caucus in March (she was a Marco Rubio supporter), the North Loop resident stuck around, getting selected to represent her Minneapolis precinct at the next level of caucuses. In response to her questions about moving up beyond that, the person who ran the caucus offered to meet for coffee to offer advice.

When Carnahan showed up for coffee, however, she was greeted not by one Republican activist, but three. And they didn’t want to talk about her becoming a delegate. They wanted to talk about her becoming a candidate for state Senate in Minneapolis’ District 59. She wouldn’t have to do much, Carnahan was told. File, raise enough money to get state matching funds, create a website, make a few public appearances. That’s all. It wouldn’t even take much time away from her business.

“‘We need to be clear,’” Carnahan recalls being told. “‘You have no chance of winning unless the entire district dies of the plague and you’re the only one left and you vote for yourself.’”

Not exactly a promising sales pitch. But also mostly accurate. In 2012, Carnahan’s DFL opponent in District 59, Sen. Bobby Joe Champion, won his first term with 82 percent of the vote. And nobody expected his Republican opponent — any Republican opponent — to do much better in 2016. Such is the lot of political parties in districts that are heavily tilted toward the opposition.

After sleeping on it, Carnahan decided to say yes — on one condition. “If I’m going to do this,” she said. “I’m going to treat it as if it were a winnable race.”

District 59 covers a wide swath of Minneapolis — from Mill District condos to North Minneapolis single-family neighborhoods. It is a majority-minority district, with 38 percent of residents identifying as white. The median age is just over 30 years and the median income is $42,500. In the last three state Senate elections, DFL candidates won by an average margin by nearly 60 percentage points, making it the state’s fourth strongest DFL district.

The only real political competition comes in DFL primaries — as 20-year incumbent Joe Mullery learned this year when he lost an intraparty challenge from Fue Lee. 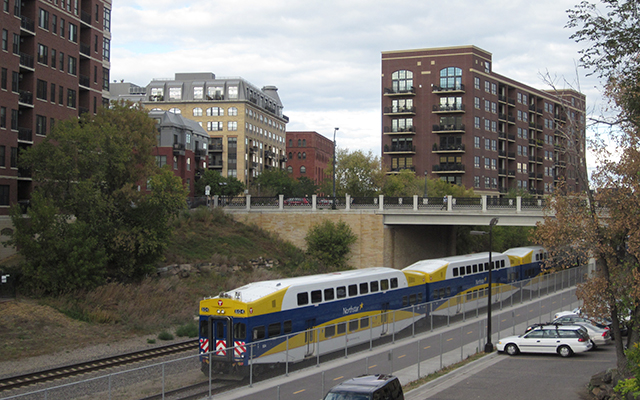 That made Carnahan’s search for precincts where a Republican has done even reasonably well a brief one. The district’s most-Republican precinct, thanks to the presence of Assemblies of God-owned North Central University, had a 38 percent GOP vote over the last three senate elections. Another precinct in North Loop came in at 31 percent, one in Mill District at 30 percent and one in downtown Minneapolis at 25 percent.

There are also three precincts in the northwest corner of the district with GOP numbers between 22.5 percent and 26 percent. Those neighborhoods have a sizeable Asian population, mostly Hmong, where Carnahan thought she would have some appeal.

And that’s about it.

So those precincts are where Carnahan is concentrating her efforts. The former marketing professional wrote a strategic plan similar to what she might have done for the companies she once worked for. She set about raising enough money to cover printing and a handful of mailings to her targeted voters and precincts. And she hit the streets. By election day she expects to have been in every building downtown, in the Mill District and in the Warehouse District/North Loop, where she has invoked a state law requiring secure buildings to allow candidates in to campaign. Once inside, Carnahan said she is often told she is the first candidate to ever knock on their doors.

She said she has been greeted warmly by some of those voters. Last week, in Elliot Park, she met a union bus driver who, after learning her party affiliation, said he couldn’t vote for her. Carnahan launched into her standard speech about not judging candidates by the letter after their name, reminding him of the good conversation they’d just had about issues and saying how people don’t like being typecast.

When she finished, he smiled and said: “Wow, you’re right” and promised to vote for her.

A different kind of Republican?

Carnahan’s policy positions aren’t very far from the standard Republican platform — lower taxes, less regulation, focusing on core state spending needs, school choice, concerns over crime. She keeps position statements vague, however, and on many of her campaign pieces, the word “Republican” and the letters “R” or “GOP” do not appear.

“If they look at the letter after my name and only go on that, I’m sunk,” she said. 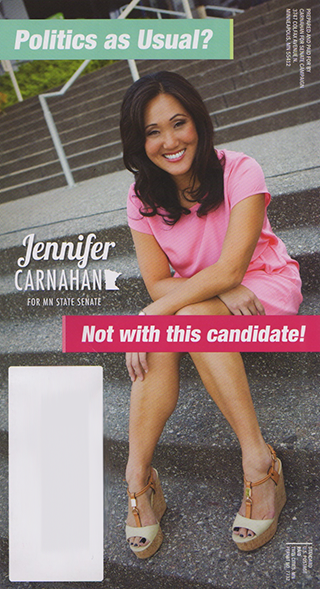 But she says the difference between her and some other Republicans comes from what she calls her desire to be “socially inclusive.” When pressed, Carnahan said that means issues such as gay rights and gay marriage.

“Some of my best friends are gay and they deserve the right to be happy just like everyone else,” she said. And then there’s what she cautiously refers to as the “top of the ticket” — Donald Trump. Carnahan won’t say who she will vote for other than that it won’t be Hillary Clinton. Using a term from her sports marketing days — she says her presidential vote will be a “game-time decision.”

“The top of the ticket doesn’t have anything to do with my race,” she said. “Honestly, I just try to stay away from it because it’s a conversation you’re just not going to win.”

So, if she’s a long shot at winning a Senate seat, how will she measure success? She reported raising $21,822 for her campaign (in contrast, Champion has raised $14,225 this year but had $24,959 left from previous years), and wants to surpass the GOP vote in 2012 when Champion won his first Senate term. The Republican candidate that year did what was suggested she do this year — file and forget it — and took 17.5 percent. “If I could go from 17.5 percent to 25 percent, I would consider that a great victory,” Carnahan said. “But I don’t even know if that’s possible.”

In the end, her message for the GOP is that it shouldn’t write off city districts like hers. They probably won’t win, but if they can close the gap between the Democratic and Republican vote in the Twin Cities, it could help the party in statewide elections. “How can you expect to win in Minneapolis if you put no resources into Minneapolis?” she said.

Despite being told by party activists that she’s already passed the point of diminishing returns, that any more effort won’t bring more votes, Carnahan said she is going to keep running to election day.

The loneliness of running as a Minneapolis Republican