It was going to be the celebration of a lifetime. Women had arrived at the Hilton Hotel in downtown Minneapolis, hoping — even daring to expect — that Hillary Clinton would be elected president. The ultimate glass ceiling would be shattered.

On Election Day afternoon, Josie Johnson, a Minnesota civil rights giant, had talked about why this hope to elect a woman as president had always seemed different from the joy that had surrounded the Obama campaign of eight years ago.

“When Obama was elected,’’ Johnson said, “it was a different feeling. For me it was an event I thought I’d never see in my lifetime. I was so happy. But there’s always been a cloud over this campaign. That there is a segment of our society that could endorse and support Donald Trump for us as black people has been scary. I don’t think we realized — or let ourselves realize — that supremacy and racism was so close to the surface.’’

Hours before the polls closed, Johnson was on edge. “I’m scared,’’ she said Tuesday morning.

Johnson stayed home on election night, choosing to spend the evening with her grandchildren. But many other came to the Hilton, believing  they would see history. Kathryn McConnell and her spouse, Sue Jones, recently moved to Minnesota from the D.C. area. They had come to this event not so much to see a “first,’’ but because in their view it was clear who the more qualified candidate was.

“I worked in the State Department and I didn’t look at this as a feminist issue,” McConnell said. “She was great. I remember her last day at work. We got word that if we wanted to say goodbye, she was going to be leaving the building through the main lobby at 10 o’clock in the morning. I went down to the lobby, which isn’t very big. We were all crowded in the lobby and she’s coming through, the clapping got louder and louder and louder. It was like she was a rock star.”

But that star quality, that sense of her competence was obviously missed by millions. And as state after state turned red on those big TV maps, there were discussions, sometimes small disputes over what was going wrong. Was gender the decider? In 2016, is this country still not capable of voting for a woman to be president?

“In part it was the media, especially cable,’’ said Hausman. “Whenever he talked, they gave him time, even when he was obviously lying. Every time they’d mention her, there was mention of her emails. Then, there’d be these stories about how Americans think of her as ‘secretive.’ Here she’s running against the first person in 40 years not to release his tax returns and she’s the one who’s considered secretive. I think that’s in part the coverage, and I also believe it is gender.’’ 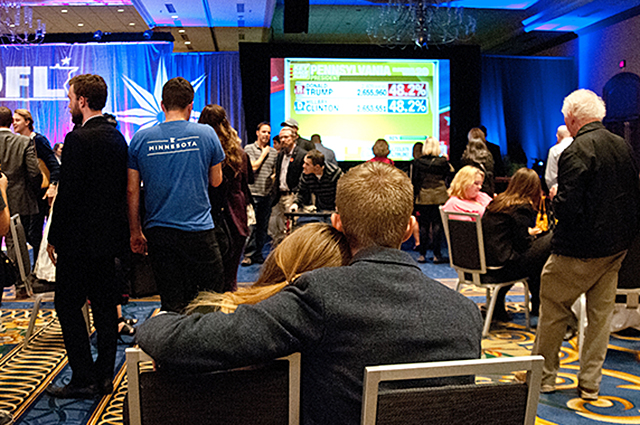 MinnPost photo by Bill Kelley
DFL election party attending watching the returns on televisions and smartphones at the Hilton Hotel in Minneapolis.

Torres Ray, who had been a Bernie Sanders supporter, was having no part of that.

“He caught the heart and essence of what is going on in this country,’’ she said, “and Hillary didn’t. I think Hillary’s amazing and intelligent and skilled. But as a political person she’s lacking something important.’’

“She admitted that,’’ Hausman said. “But she had plans, policies, experience, stability. Isn’t that enough?’’

Hausman said it’s hard for her imagining another woman stepping forward, given what Clinton went through.

“Who would it be?’’ Hausman asked.

“It doesn’t have to be somebody we know right now,’’ said Torres Ray. “Just remember, we were not prepared for Barrack Obama when he appeared. Nobody knew him and he caught our hearts. Hillary didn’t do that. But that doesn’t mean somebody else can’t.”

At times, the evening turned bizarre. At 10:40 p.m., the song “I Feel Good” was blasting through the hall, a place where very few were feeling good. And it was especially bizarre when politicians would step to the podium in an effort to pump up a numb crowd. Dayton, Smith, Klobuchar, Hodges, Coleman, Franken, Ellison and many others spoke. They raised their voices. They waved their arms enthusiastically.

But reality hung over the ballroom. The most optimistic thing the pols could say was, “It’s gonna be a long night.’’ 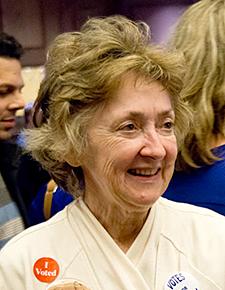 This was supposed to let the crowd know that the night was over until the last vote was counted. But most understood that this night got long in a hurry. By 9 p.m., the dream was becoming a nightmare. And then it kept getting worse.

Anne Jones, a retired military person, was hurt and angry. “You’d hear him say, ‘SHE can’t be the commander in chief,’ ” Jones said. “This from what they call people like Donald Trump in the military. They call them ‘Chicken Hawks’ or ‘Tin Soldiers.’ They’re willing to send somebody else’s kid to war but they won’t be there and they won’t send their kids. … I just find all of this shocking.”

Lorraine Applebaum had a different perspective. She’s 91 and never in her life had given politics much thought — mostly, she said, because she grew up at a time when there was no role for women in politics.  But then Hillary Clinton won the Democratic nomination and Applebaum was hooked. “I was thinking about it every day,” she said. “I’ve been so excited. But after tonight, no more.”

In general, it appeared that young women were crying, older women tended to walk around with stunned looks.

Aviva Breen has been at the forefront of women’s and civil rights activities in Minnesota for decades. She had come to this event with Phyllis Kahn, the longtime state rep who was defeated in a primary a few months ago.

“I think part of what happened is gender,’’ said Breen. “But I also think there’s some other ugly stuff as well.’’

Kahn shook her head in agreement. “The concept of white man as victim is very difficult for me,’’ said Kahn.

“Maybe this will be the white man’s last stand,’’ said Breen. 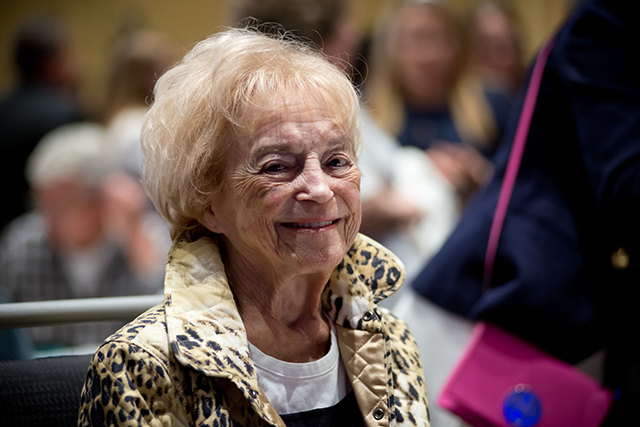 MinnPost photo by Bill Kelley
Lorraine Applebaum: “I’ve been so excited. But after tonight, no more.”

Will women like Breen ever see a woman as president?

“Probably not in my lifetime, which is getting shorter all the time,’’ said Breen, who is 80.

Perhaps the only people looking sadder, more concerned than the women were small groups of Somali-American men. They huddled around TV sets and shook their heads sadly.

“This is absolutely unexpected,’’ said Abdul Ahmed, who had been a Hillary delegate at the Democratic Convention. “What bothered all of us is when he [Trump] came to Minnesota. He came here and he impugned our integrity our citizenship. Why would he do that?”

Ahmed throughout the evening he was receiving texts from others in the community. “These are from U.S. citizens,’’ he said. “They’re talking about his Muslim ban and they’re wondering, ‘If we leave the country will we be able to come back?’ ”

It appeared that Minnesota was going to end up supporting Clinton. That gave the Somalis some comfort.

“This is the best state ever,’’ said Ahmed. “I like Minnesota nice. We people in Minnesota will be together.’’