As poll closed across Minnesota on Election Night, excited Democrats filed into the Hilton Hotel in downtown Minneapolis, ready to start a party more than a year in the making.

The event was the culmination of a bizarre election cycle, but the DFLers in attendance felt good: Nearly every poll showed Democratic presidential candidate, Hillary Clinton, would beat Republican nominee and former reality television star Donald Trump. Assuming that was true, Democratic candidates down the ballot would ride her coattails, keeping the state Senate blue and possibly even flip the Minnesota House, giving the party complete control of government for the next two years.

Clinton wasn’t the only reason activists were feeling confident, though. Minnesota Democrats are known for their sophisticated campaign operation, and they had out-raised and outspent Republicans once again, mostly through a vast network of labor unions and wealthy individual donors. They also touted their superior ground game, especially their efforts to turn out voters early this year. And they had the best data. They were the first state party in the country to create a statewide voter file, in the early 2000s, and they’d been refining it ever since.

But as results starting rolling in, with Trump winning state after state, the mood shifted. Prominent speakers like DFL Gov. Mark Dayton and U.S. Sen. Amy Klobuchar took the podium to energize the crowd. But the news just kept getting worse. As the hours passed, the large crowd thinned until just a few groups were left, huddled in small circles on the floor. By the end of the night, Republicans had expanded their majority in the Minnesota House and were on track to take over the Senate, and Trump was on his way to becoming the next president of the United States.

Now, Minnesota Democrats find themselves ideologically and geographically isolated. They lost control of the Senate after the GOP flipped seven seats in Greater Minnesota, while House Republicans defeated two longtime DFL representatives in Grand Rapids and Bemidji. What’s left is a DFL Party confined to Minneapolis, St. Paul and the inner-ring suburbs, with a few reliably blue seats scattered about the Iron Range and in regional population centers.

Along the way, a lot of conventional campaign wisdom was left shattered: that money, paid media, superior data and ground operation — or even disciplined messaging — are required to win an election. And now, Minnesota Democrats — from the highest-ranking officials to they party’s newest activists — are looking inward, questioning the way the party runs its campaigns and the message it sends voters. And they are digging through piles of data to figure what went wrong — and where the party goes from here.

DFL Party Chairman Ken Martin has spent the last week pondering these questions, but there are a few pieces missing from his analysis, particularly final voter data from the Minnesota Secretary of State’s office. Once that’s in hand, Martin said, he’ll have a better understanding of whether the programs they put in place worked.

But a few things are clear: Trump got the same vote percentage in Minnesota as 2012 Republican nominee Mitt Romney, but Clinton lost 19 counties that President Barack Obama won that year. That means a lot of people who voted for Democrats in 2012 either didn’t show up or didn’t vote for the party this time around, and part of the reason was a message that didn’t focus on the economy, Martin said.

The economy was the defining issue of the 2016 election. There was job growth and the unemployment rate fell in the last year, but household incomes for many people are still depressed. “Clearly there were a lot of white, non-college-educated, working-class voters who were frustrated and anxious about their future and they wanted change,” Martin said. “We have to figure out how to speak to white, working-class voters in a better way.” 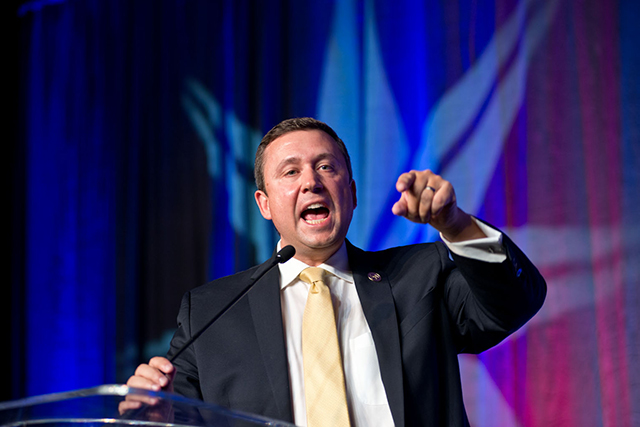 It didn’t help that a month before election day, rising premiums for people on the individual marketplace of the state’s health insurance exchange, MNsure, helped drive that message home. Voters were quietly simmering, and Trump and Republicans down the ballot benefited, particularly in the exurban and rural parts of Minnesota.

“We’ve all seen the aggregate data that says the economy is good, but people don’t feel it themselves,” said Darin Broton, longtime DFL strategist with Tunheim Partners. “Democrats needed to put that into context, that we’ve made progress and there’s more work to be done. Average folks are still struggling and they are struggling to understand, ‘Where are we going?’”

Meanwhile, over the last four decades Democrats have shifted their focus and message to more environmental, social and civil rights issues, Broton said. “We continue to talk about social issues, and every time we talk about social issues we keep getting our hand slapped, and last week we got our hand slapped pretty hard,” he added. “People think, ‘Why are we focusing on those issues? Those aren’t the things that affect my family right now.’”

One bright spot for Democrats in the 2016 election: U.S. Rep. Rick Nolan survived a competitive and expensive challenge from Republican Stewart Mills and a Republican wave. Trump beat Clinton in the district, the first time a Republican presidential candidate has won the Iron Range since before the Great Depression. Democrats say Nolan won, at least in part, because he had a convincing message about the economy. He supported mining in his district, he urged the federal government to crack down on illegal dumping of subsidized foreign steel and he pushed for some of the highest tariffs and taxes ever imposed on steel from China and other nations. 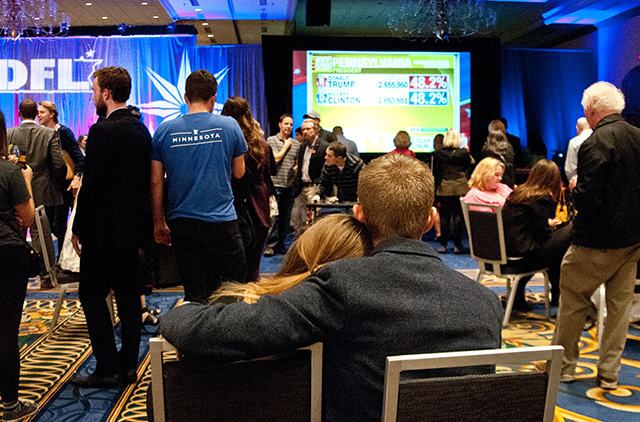 MinnPost photo by Bill Kelley
Attendees of the DFL Election Night gathered at the Hilton Hotel in downtown Minneapolis watching the election results.

The 2017 legislative session, which convenes in January, will provide an opportunity for Minnesota Democrats to re-define where they stand on economic issues, especially in a year where lawmakers must craft a budget.

“Minnesota is a prairie populist state from way back,” said Ryan Winkler, a former DFL representative who knocked on doors for Democrats this summer and fall. “People expect to have a shot at working for a living and having a decent life. The economy is denying them that, and the politicians, primarily at the national level, have proven to do nothing about it. Economic populism is the only path for the Democrats back the majority.”

A fresh look at candidate recruitment

In hindsight, the 2016 election was also about rewarding outsider candidates like Trump. At the top of the Democratic ticket, Clinton represented the establishment, and all the way down the ballot in Minnesota, there were Democratic candidates who could easily be cast in that mold too.

In about a half dozen races in the state House, for example, Democrats recruited former DFL representatives to run in rematches against Republican incumbents. In the end, none of them will make their way back to the Capitol.  “In a year when voters want change, it’s not good to run candidates who have been there before and candidates who, like it or not, represent the past,” Martin said. 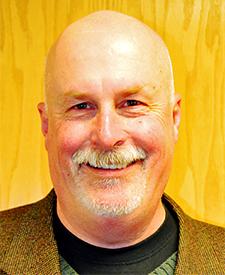 The conventional wisdom in politics is the best candidates are often not those who are most politically motivated — they may be reluctant to run at first. For Democrats, that will likely mean pushing to recruit more candidates who say no the first time around. “It’s the end of the era of recycling candidates,” said Bernie Hesse, director of special projects with the UFCW Local 1189 union. “We need to start digging deeper than we have in the past for candidate recruitment.”

They may have just gotten some help in that department, though. Jake Sanders, a DFL director in Minnesota’s rural 7th Congressional District, in western Minnesota, said the party unit struggles to keep some Republicans from going unopposed in legislative races. But after Trump was elected, there’s been a surge of people contacting the party and asking how they can get involved.

As the dust began to settle on the 2016 election, Paul Marquart found himself part of an endangered political group: moderate Democrats who represent red territory. The nine-term state representative from Dilworth, a small town near Fargo with a population of 4,104, was the only Democrat who held onto a rural Minnesota House seat that went for both Romney and Trump. And his district went big for Trump — by 22 points — while re-electing him by about 7 points.

Marquart has a history of voting with both Republicans and Democrats, which he makes sure to tell voters, but the biggest secret to his success in rural Minnesota isn’t all that secret: Marquart knocks on every single door in his district — every single year. No matter what.

“There is so much of this targeting that takes place,” he said. “I just go up and down every street, I knock every door and I listen,” he said. “[Former DFL Senate Majority Leader] Roger Moe really put it well when he said, ‘Doing that you build up a reservoir of goodwill and you will be able to survive.’” 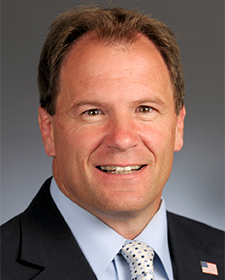 Marquart’s strategy worked. In other rural districts, however, activists say the party relied too much on data and voter lists — and not enough listening to real live voters. “One of the things we do wrong, the [DFL] thinks of people as voters to win … we think of it as a game,” Sanders said. “But we should be thinking of them as people and listening to them. It goes back to that bubble, we didn’t listen. We didn’t listen to the people and they didn’t turnout.”

With many rural seats lost across the country, some fear the Democratic party will become some kind of Tea Party version of the left, with politicians in the urban core doubling down on messages that worked in the metro area. Clinton barely eked out a victory in Minnesota on election day, proving that Democrats can still win statewide races by racking up votes in Duluth and the Twin Cities metro area. But the DFL path back to the majorities in the Legislature must include seats in rural Minnesota.

“As parties become essentially more radicalized, there are fewer rural members in the DFL caucus and it becomes harder for them to have their voices heard,” said Aaron Brown, a longtime DFL activist and writer from the Iron Range. “It becomes kind of a self-fulfilling prophecy, that the DFL will focus on urban and suburban issues and Republicans will work on at least placating what rural members want.”

For Martin’s part, he’s still considering his next step. He’s been chairman of the DFL Party for the last six years and three election cycles. He will decide after Thanksgiving if he wants to run for another cycle at the helm of the party.

Whatever he decides, he knows things need to change in the party. “I do believe that people are more fired up than they ever were before,” Martin said. “The key for us is to make sure that party is big enough to bring all those people and ideas in and focusing it on that single task of moving it forward. That’s a big job. How do we get people to stop hand wringing and move them into a state of action.”