Minnesota’s small towns have evolved plenty since the time of Sinclair Lewis’ “Main Street” and Garrison Keillor’s “Lake Wobegon Days.” Here’s a look at changes under way in four communities throughout the Southwest and South Central corner of the state that are positioning themselves for a brighter future.

“A lot of communities are getting past the negative narrative and are looking to build on the assets they have,” says Kelly Asche of University of Minnesota Morris Center for Small Towns. In the places that are turning things around, there’s a new emphasis on engaging “the people and talents already in the community.” This means promoting entrepreneurs to start business and civic initiatives to ensure a high quality of life for everyone in town — which are the keys to keeping residents, attracting newcomers and igniting opportunities.

An event feared by every small community unfolded in Willmar (pop. 20,000) eight years ago when the Willmar Regional Treatment Center (previously Willmar State Hospital, which once employed 320 people) shut its doors. Today the handsome early-20th-century buildings and parklike grounds overlooking Willmar Lake flourish as the MinnWest Technology Campus, where 31 businesses clustered in bioscience, agribusiness, and technology employ more than 550.

The Midwest office of Procore Technologies — a California-based firm specializing in cloud-based project management software for the construction industry — fulfills all the expectations of tech sector office: young people tapping on laptops at stand-up desks while their dogs roam the office. “The historic look and creative feel of the campus are awesome,” says the company’s director of customer support, Ryan Thielen, 34. “There are like-minded people and like-minded companies here.”

“It’s a fabulous location for us,” says Kathy Schwantes, southwest regional director of University of Minnesota Extension, which bases its Mid Central Research and Outreach Center here. “It is very synergistic for our mission, which focuses on research, education, and outreach. It has been beneficial in our employee recruitment efforts as well.”

A coworking space with a gorgeous veranda and three meeting rooms opened in the former Women’s Building in 2015, and now thrums with activity from a dozen start-ups, which include a marketing firm, digital media filmmaker, and yoga studio. 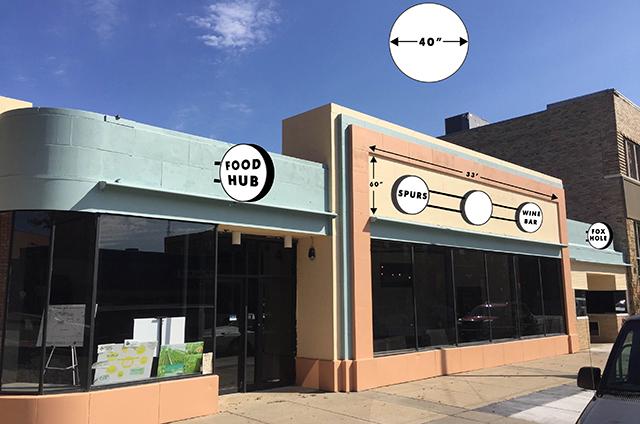 Courtesy of the City of Willmar
A mockup of the exterior of Historic 313 on Fourth Street in Willmar.

The changing face of nonmetro Minnesota can be spotted in downtown Willmar, which for decades lost business to shopping centers on the outskirts of town (and has the scars to prove it) but now is reinventing itself as the nucleus for the town’s changing culture. (Immigrants and their children, primarily Latino but also Somali and Burmese, make up about 20 percent of the town’s population.)

The farmers market and brewpub were the first phase of the Willmar Food Hub, where La Bella Vita pizza bar, Spurs Latin restaurant, space for 15 to 20 local food vendors, and a commercial kitchen are under construction in a historic Art Deco building.

Marshall (pop. 13,500) possesses many key ingredients for economic success in the 21st century: corporate headquarters of a major firm (Schwan Food Company), a university (Southwest Minnesota State), a full-service downtown (everything from a fine arts center to a Mexican grocery), and esteemed public schools and health care facilities (two reasons Livability.com ranked it #28 among the 100 Best Small Towns in America in 2015).

Yet a hometown’s shining reputation means little to residents struggling to make ends meet. Creating opportunities for all families in town is the mission of  Marshall Area Technical & Educational Center (MATEC), an alternative public school that has morphed into a learning center giving high school-age kids and adults a head start on careers in growing fields like health care and welding. Classes offer credits toward a high school diploma as well as training toward certification as a welder or a nursing assistant.

Located in an old building near downtown that once housed a Shopko store, the school’s facilities look one-part schoolroom and one-part workplace. A medical mannequin reclines on a hospital bed at the back of a nursing class, while in the shop welding students, seated at booths with overhead vents, construct bike racks and smokers for backyard cookouts.

“We use community experts and instructors through Minnesota West [Community and Technical College] to teach the vocational and technical classes, so this is also an opportunity to meet people who are currently out in the workforce,” says Michelle Noriega, assistant principal of MATEC. “They tell students to get their education now!”

Welder or certified nursing assistant (CNA) are not the final destination for all students. Becoming a CNA is often a steppingstone to other health care careers, and welding opens doors to a variety of construction, mechanical, and engineering jobs.

Luverne gets a LIFT

A mere 30 miles from Sioux Falls, Luverne (pop. 4,750) could easily become a sleepy satellite of South Dakota’s growing urban center. “Being so close to a bigger city is a deficit as well as an asset,” says Mayor Patrick Baustian, who works in Sioux Falls at the Air National Guard base. “It’s up to us to show the interstate goes both ways.” 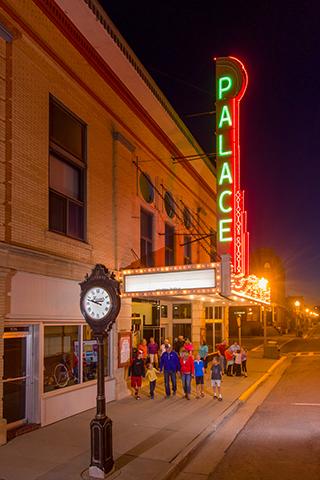 Courtesy of the City of Luverne
Downtown Luverne

That’s what drove the formation of Luverne Initiatives For Tomorrow (LIFT) — an informal community-wide group working “to make Luverne a more exciting place.” The group drew 185 residents to its inaugural meeting in 2010, and has since come up with more than 200 ideas to improve the town.

“As a nonprofit, LIFT can do some things the city can’t,” the mayor acknowledges. That includes advising prospective business owners on the ins and outs of getting things done in Luverne. The results can be seen on a lively three-block main street that sports a movie theater, fine dining, upscale boutique, home décor store, and an old hotel refurbished into up-to-date apartments, as well as Pizza Ranch, a dollar store, a tae kwon do studio, and consignment shops.

“People here are willing to invest in the community with time and money,” says Tim Connell, a retired judge. “They see the long-term standard of living that comes from that.”

Connell estimates that at least $5.5 million of private investment has been directed toward community improvement projects in the past decade, ranging from restoration of the showplace Palace Theater (where filmmaker Ken Burns premiered his PBS series on World War II) to the Take 16 craft brewery to GrandStay Hotel & Suites to the Brandenburg Gallery in the renovated historic county jail, featuring the work of wildlife photographer (and native son) Jim Brandenburg.

“I’m an investor in some of these kinds of things,” says Gary Papik, who owns the local GMC/Chrysler dealership. “I give back to the community because I want my family to stay here. I want Luverne to remain strong.”

The city has done its part, too. It has built an indoor swimming and fitness center and a hockey arena. A 12-mile network of bike paths that connects to Blue Mounds State Park is under construction. As I toured the town with Papik, Connell, and Mayor Baustian, they pointed out sites planned for a new city park, municipal campground, seven pocket parks, and more. Finally, when the mayor noted that “we have the lowest property taxes in the 17 counties of southwestern Minnesota,” I asked how they could pay for all this.

“The city government couldn’t do half of what we do if we did not own our own power utility,” says Baustian.

Luverne is also blessed with notable natural assets within a few miles: Blue Mounds State Park, a dramatic cliff of quartzite rising unexpectedly out of the plains that features a roaming bison herd, and Touch the Sky Prairie, a thousand acres of beautiful native grasslands preserved by photographer Jim Brandenburg with other philanthropists. The U.S. Fish and Wildlife Service manages the preserve, which is open to the public

The lack of hope afflicting rural Minnesotans today is a particularly acute problem in American Indian communities. A stark opportunity gap remains between Native American students and their white peers throughout the state.

“Because of the core historical trauma we experienced, our kids often don’t know who they are and where they are going,” says Vanessa Goodthunder,  a member of the Mdewakanton Band of the Dakota Nation, who graduated in 2016 from the University of Minnesota Twin Cities.

Goodthunder returns home frequently to the Lower Sioux Reservation near Morton to help young people “remember, reclaim, and reconnect with our Dakota way of life, which is all about relationships. That’s how the process of healing happens. It’s what brings us back.”

She teaches in the Dakota Wicohan program, a nonprofit group separate from tribal government that since 2002 has immersed youth ages 11 to 18 in Dakota language, values, history, culture, arts, and sports.

Wicohan uses the local Gaby and Darwin Strong Ranch to teach kids how to ride horses, take care of them, and understand the horse culture so entwined with Dakota tradition. The organization also sponsors a lacrosse team, which, Goodthunder notes proudly, won a national tournament in  Oregon last year. Since trail running is part of Dakota culture, she organized a 5K health run, with elders encouraged to participate as walkers. The Dakota Wicohan building on Morton’s main street hosts classes for all ages in traditional storytelling, hide tanning, beadworking with porcupine quills, and quilting. 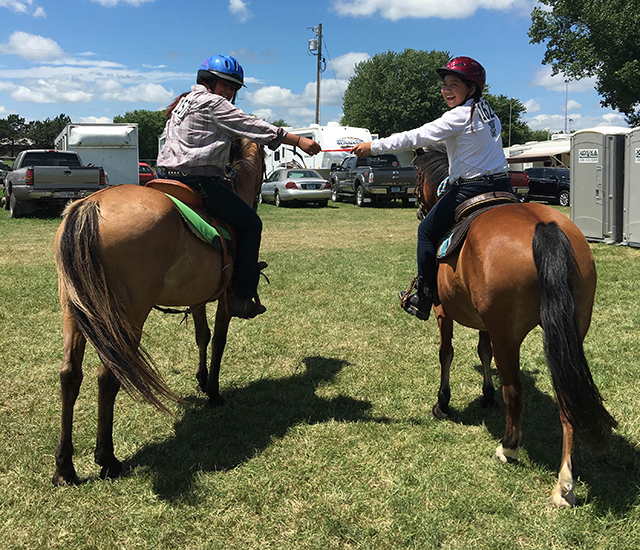 Laughter rings through the organization’s offices when a quilting class is in session. “This one is for my bed,” exults Angie O’Keefe, holding up her work. Women of all ages sit around a table lining up strips of cloth and cutting them using a tool that resembles a pizza slicer. A whiteboard spells out the Dakota name for each color.

“Our language tells us about our relationship to the land, to our foods, to people,” explains Teresa Peterson, cofounder of Dakota Wicohan. “In our worldview, everything is related, and now science is catching up with Native thinking. Quantum physics shows the connections between many things.”

Peterson — whose doctoral dissertation in education at the University of Minnesota Duluth focuses on using Dakota stories about people’s sense of belonging in social studies classes — believes the values embedded in indigenous languages and culture are important for people of all backgrounds. “We think we can contribute by offering this thinking as a resource to schools, nonprofit groups, and communities,” she says, noting that Wicohan curriculum has been taught to all students in a local school.

“We have to shift people’s views of history as being about relationships. We have to understand that fostering a circle of belonging is good for our health,” she emphasizes. “We want Minnesota youth to think about their relationship to Minnesota’s land and to each other.”

Brew pubs, tech hubs, diversity: Another side of rural Minnesota