At first, it was just a stumble.

Mark Dayton was walking up to the chief clerk’s desk in the Minnesota House chambers, about to deliver his seventh state of the state address as governor, when he tripped in front of a joint session of the House and Senate. The room gasped, but Dayton was caught by several people around him, and he got right back up.

“I knew I should have shown up for the walkthrough,” Dayton immediately quipped, before launching into his prepared speech.

He talked about his upcoming 70th birthday on Thursday and his decades living in Minnesota. He joked about waiting for the ice to freeze to play pond hockey and Norwegians trying to get along with Swedes. He talked about standing up to hate crimes in Minnesota — to cheers from legislators — and pushed for more funding for students, transportation and clean water. More than 40 minutes in, he was just getting to the meat of his speech: his proposal to address rising health-care costs for thousands of Minnesotans.

He stopped to take a sip of water and started to speak again, but the words came out in a slur. He put his shaking hands on the lectern to brace himself, but it wasn’t enough. Dayton collapsed, hitting his forehead while those around him rushed to break his fall. Legislators gasped and sat silently as paramedics gathered around the governor, and Republican leaders quickly adjourned the joint session.

Video of Gov. Dayton collapsing during the 2017 State Of State speech by the UpTake

Dayton eventually got up and walked out of the chamber and back to the Capitol, where he got a routine checkup. His chief of staff, Jaime Tincher, said Dayton was doing fine and spending time with his son and grandson, who were both watching the speech.

But the governor’s public collapse shook the legislators and leaders who witnessed it, as well as hundreds of people tuning in over the airwaves or through a live stream. Dayton is Minnesota’s oldest-ever governor in office. He’s had two spinal surgeries in the last two years, and usually travels with a cane at his side. Last January, he was taken to the hospital and stayed overnight after fainting at a political fundraiser. That’s on top of hip and back pains that have made it increasingly difficult for him to stand at public appearances.

“We have to be concerned about the governor’s health at this point,” Republican Rep. Greg Davids said after Dayton left the House chamber. “That’s the number one priority right now.”

Republican House Speaker Kurt Daudt and Senate Majority Leader Paul Gazelka had planned to comment on the content of Dayton’s speech, but they refrained from doing so after Dayton’s collapse.

“Obviously the governor is in our thoughts and prayers. I hope for a quick recovery. He is up and about in the backroom. I’m sure he’ll be fine,” Daudt told reporters. “With that, I don’t think I’ll take actual questions about the governor’s speech.”

Dayton never got to the portion of his speech that would most interest Republicans. In his prepared remarks for delivery, Dayton sets out a plan to create a “public option” in the individual health insurance market, allowing Minnesotans who earn between 200 and 400 percent of the federal poverty level — a family of four earning from $49,200 to $97,200 per year — to purchase coverage from MinnesotaCare off of MNsure. 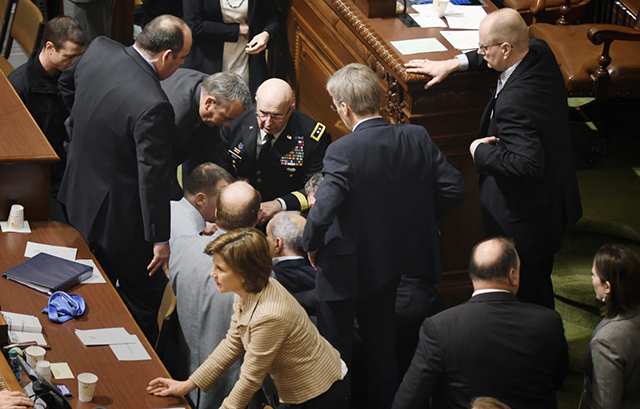 Photo by Tom Olmscheid/Workingpress Photo Agency
Gov. Mark Dayton being tended to following his collapse while delivering the State of the State Address Monday night.

MinnesotaCare covers about 100,000 low-income individuals in mostly rural Minnesota, a number that could double if people had the option to buy into the program on MNsure. The program is currently funded by mostly federal dollars and enrollee premiums, but also includes state funding from a 2 percent tax on Minnesota hospitals and health-care providers that’s set to sunset at the end 2019. Dayton wants to repeal that sunset.

“Minnesotans need us to work together to solve their health-care problems,” Dayton had planned to say, according to his prepared remarks. “That is what, I believe, we should expect from ourselves. If we all give a little, Minnesotans will gain a lot.”

Throwing a public option like MinnesotaCare into a private insurance market is a huge change, one that hasn’t been tested in any other state in the nation. It will also need backing from the federal government and the Republican-controlled Legislature, which must approve the idea before April 1 if there’s enough time to implement it for the 2018 marketplace.

Dayton also wants the Office of the Legislative Auditor to look into the state’s private health insurers in Minnesota, and create a provision that would allow people who purchase individual health insurance with serious conditions to keep their doctors for 120 days into the new plan year.

The health-care crisis is on Dayton’s more immediate agenda this year, but left room in his speech for the issues he’s been building on for years, namely education, transportation funding and clean water. In his 2017 budget he’s proposing 2 percent increases in the per-pupil aid formula for each year of the next biennium. It’s an expensive proposal, costing about $371 million.

“When I took office in 2011, I promised to increase Minnesota’s investments in E-12 education every year I was Governor – with no excuses, no exceptions. With your support, we have kept that promise, and I’m not going to abandon it now.”

Dayton will expand on many of these ideas in his full 2017 budget proposal, which he will release as previously scheduled on Tuesday morning, despite his collapse.

The governor has already released his $300 tax relief proposal and a $1.5 billion bonding bill, but his budget will detail how he thinks the more than $40 billion state budget should look for the next two years, not to mention how he wants to spend an estimated $1.4 billion budget surplus.

In his state of the state address, Dayton repeatedly talked about being fiscally responsible with the state’s budget, hearkening back to his first session in 2011, when the state faced a $6 billion budget deficit.

“In my first Inaugural Address, I promised that I would ‘clean up the state’s financial mess.’ I have kept my word. We have turned that first $6 billion projected deficit into $1.4 billion projected surpluses for each of the next two bienniums.”

Dayton promised to leave office in two years with surpluses at the end of the next two budgeting cycles, and warned legislators not to propose deep tax cuts, like those passed during the late 1990s and early 2000s. Those tax cuts set the state up for repeated budget deficits.

The governor didn’t get to the final closing remarks in his speech, but he planned to say the “state of our state is strong, and getting stronger.”

“We have much to be grateful for, and many achievements to celebrate,” according to his prepared remarks. “But we still face serious challenges. From education achievement gaps, to aging transportation infrastructure, excessive health care costs, polluted waters, and inequities within and between communities.Despite their enormity, we can solve these problems, and Minnesotans have the right to expect that we will. That is what they elected us to do.”