Over the years, the complaints about the finances of U.S. Bank Stadium — aka the “People’s Stadium” — by former Gov. Arne Carlson and former Minneapolis Council Member Paul Ostrow have taken on the appearance of windmill tilting.

It’s not that their concerns about the terms of the deal between the city and state and the Minnesota Vikings are baseless; many state elected officials have expressed similar misgivings, both before and after the deal was approved. It’s just that Carlson and Ostrow haven’t been able to get much traction. Grumbling about the deal is one thing, getting somebody to do something about it is something else.

That disconnect seemed to be playing out again last month, when the city council took testimony on the city’s 2017 budget. At the meeting, Ostrow distributed a lengthy letter to the council and Mayor Betsy Hodges written by Carlson and himself urging council members to become more involved in determining whether the deal is being carried out fairly for taxpayers.

“I urge you to do what is in your power to address the growing costs of the Vikings Stadium for Minneapolis taxpayers,” Ostrow told the council at the budget meeting. “The misconception people have in that the stadium debate is over. It isn’t and it’s time for the city to act to stop this.”

Such scolding doesn’t usually prompt action by those on the receiving end of the lecture. But this wasn’t one of the usual times. The council unanimously approved a “staff direction” request by Carlson and Ostrow to take a deeper look at how the city can more closely monitor the costs it’s incurring due to the stadium — and even if it should renegotiate the stadium use agreement with the Vikings and the Minnesota Sports Facilities Authority.

‘Oversight was a sham’

The 10-page letter submitted by Carlson and Ostrow to the council on Dec. 7 was critical of Hodges and the council, largely for not using city resources and the council committee process to serve as a more diligent watchdog over both the stadium and the downtown Commons park.

Carlson and Ostrow argue that the state law governing the stadium deal caps public contributions to the project at $498 million — $348 million from the state and $150 million from the city — but that both governments have exceeded that amount with indirect expenditures for infrastructure and related spending. The pair also remains unhappy with the governance and funding for the downtown Commons park, maintaining that running a park is outside the city’s legal authority. They also argue that the deal struck with the Vikings over use the of the park is canted too far in favor of the team — that it’s essentially another monetary contribution not included in the state cap on spending.

The pair has also taken aim at the city-funded parking ramp adjacent to the stadium, and the revelation that the MSFA — the public board that owns the stadium — gave the Vikings the proceeds from the sale of naming rights to Mills Fleet Farm.

“In essence, the very checks that government put in place to protect the public against excess and illegal spending were abandoned by those same governments,” Carlson and Ostrow wrote. “Oversight was a sham … .”

The council’s response, which was offered by Council Members Cam Gordon and Alondra Cano and signed onto by Elizabeth Glidden, Andrew Johnson and Kevin Reich — ordered city staff to:

Gordon, who voted against the stadium funding plan when it came before the council in 2012, said he wanted to respond to the call for more accountability. “The council members are also somewhat in the dark about what we are spending.”

“It just seems we could use some regular reporting on all this,” Gordon said. “Otherwise it is easy to forget that we are involved in this deal and it is expensive.”

If nothing else, the information could be used to demonstrate to legislators from other parts of the state that the city is paying for an amenity that is used by everyone, he said.

A spokesperson for Hodges did not respond to requests for comment on the council’s move, and Ostrow said the mayor hasn’t replied to their latest letter. The mayor opposed the stadium deal when she was on the city council.

A “staff direction” is something peculiar to Minneapolis. In most cities, staff is directed by the executive, either a strong mayor or a city manager. Council can pass ordinances and resolutions and ask mayors and managers to do things, but they are only requests. But in Minneapolis’ form of city government, which divides power between the council and the mayor (as well as a city coordinator, who answers to both), the council can order city staff to do things via staff directions. Sometimes it is a request to research a topic, other times it is a direction to come back with a specific policy recommendation.

The council has passed staff directions regarding the stadium project before. It ordered an examination of the city’s attempts to renegotiate the use agreement for the Commons park. It also directed finance department staff to compile a report on the city sales and entertainment taxes, which are used partly to fund city assets such as the Target Center, the convention center and the Vikings stadium. 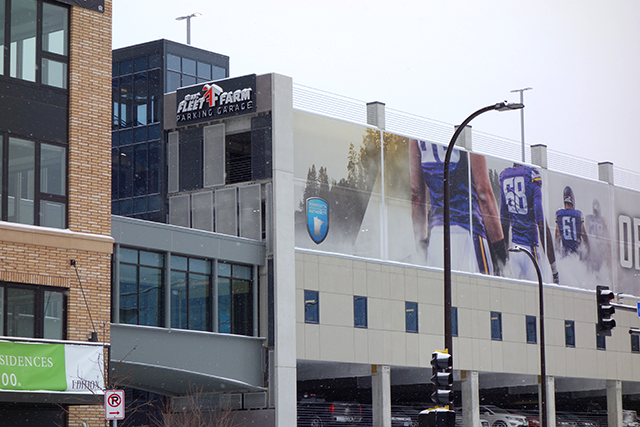 MinnPost photo by Peter Callaghan
The MSFA gave the Vikings the proceeds from the sale of naming rights to Mills Fleet Farm.

While the sales tax report was delivered to the council last spring, city staff reported back to the community development committee last January with an update of the commons construction and financing. Community Planning and Economic Development staff stated that it would like to renegotiate the use deal with the MFSA and Vikings and was working with a non-profit that will operate the park to do so. No new deal has been reached.

(While the Vikings were not interested in reopening the Commons use agreement, a team official did send an email last summer detailing how the team would not be using the park as frequently and intently as the use agreement provides. In that message to Council Member Jacob Frey, executive vice president Lester Bagley wrote that the team wouldn’t use the park property for pre-game functions requiring tents and power. Instead, those uses would shift to the lot next to the county medical examiner’s facility. Bagley also wrote that the Commons would be open to everyone, not just ticketed fans, on game days.)

Mark Ruff, the city’s chief financial officer, said some of what is in the staff direction regarding U.S. Bank Stadium is already in the works. The sales tax report, for example, will be updated again this spring.

There is also a need for the city and state to settle on how the state will be reimbursed for costs the state has fronted during the early years of the project. Under the stadium financing law, the state pays those costs until 2021, when some city convention center bonds are retired. The sales and entertainment taxes that had gone to pay off convention center debt then shift to pay Vikings stadium debt service and expenses. At that point, the city must also begin to repay the state for covering the city’s early share of the stadium payments.

In 2021, the city estimates that $23 million will be retained by the state for Vikings stadium related expenses. The city sales and entertainment taxes are expected to produce about $89 million the same year.

Ruff said that state revenue and budget officials have already agreed to start those talks. He’d like to report to council on an agreement by spring, about when he will update the council on the sales and entertainment tax collections and uses.

“What I took away from both of those staff directions was, ‘Let’s put into place something outside of the regular budget process where we have a chance as a council to evaluate how we’re using that resource.’”

The city also has agreements with the MSFA and with Ryan Co., the developer of the nearby Wells Fargo office towers, parking ramp and the Commons park. Ruff expects to brief the council on the status of those as well. “I plan on coming back to the Ways and Means Committee, presenting our report and asking ‘Did we miss something out of this staff direction that we should add to this report on an annual basis?’”

‘You don’t get a free pass’

Ostrow said this week he thinks the first step is to have all of the agreements and revenue flows laid out for the council members. Then he’ll see if they do anything about it.

“There seems to be the position taken that as long as I — the mayor or council members — took a position against the stadium or voted against it, my hands are clean and don’t bother me about it anymore,” Ostrow said. “But I reject that. This is an ongoing project with ongoing public monies being spent. I don’t think you get a free pass just because you stated opposition to it several years ago.”

Gordon said he understands why elected officials, even those who opposed the stadium project, would not want to revisit it now that the stadium is opened. “Sometimes you lose something like that and it hurts and it’s difficult and you don’t want to go back and relive it,” he said. “I also sometimes think I’m going to look like a cranky old-timer up here revisiting these battles that I didn’t win.”

But the Carlson and Ostrow letter showed there is community interest in the topics, Gordon said. “There is a level of transparency and accountability that people deserve.”

Correction: This article was updated to correct a statement that city staff had not responded to a staff direction related to the use agreement for the Commons.  The Community Planning and Economic Development staff reported to the council community development committee in January of 2016.

The fight over funding U.S. Bank Stadium isn’t over