Ginger Jentzen isn’t the first 2017 Minneapolis city council candidate to come out of recent social justice movements. But after declaring for the open Ward 3 seat Wednesday evening, she will be the first to run under the banner of the Socialist Alternative organization.

Jentzen was the campaign manager for the $15NOW movement that lost the battle last summer on making Minneapolis the first city in the state with a higher minimum wage. But the campaign appears to have won the larger war on the issue — bringing pressure that turned a majority of the current council in favor of a city-only minimum wage.

She made her candidate announcement as part of a Socialist Alternative event in Northeast that featured Seattle City Council Member Kshama Sawant, who won her seat in 2013 as an independent socialist, one of the first in the nation to do so. Sawant is now helping take the movement national.

“After the fight for the $15 minimum wage and with the Trump Administration, it’s incredibly important that we have real fighters for working class people, candidates who come out of social movements that are rooted in the struggles of our communities,” Jentzen said in an interview Wednesday.

“We need people who are as comfortable with building social movements as they are with the everyday tasks of city hall.” she said. Jentzen will not caucus with the DFL this spring.

The Socialist Alternative came into prominence in Seattle in 2013 after electing Sawant as the first independent socialist candidate to win a major city position in decades. Then, with Sawant at the lead, the organization was part of the coalition that succeeded in winning a $15 minimum wage ordinance there.

It is now a national movement, with headquarters in New York and chapters around the nation, including in Minneapolis. It asserts that it fights for the 99 percent and has disdain for the two major parties. “We believe the Republicans and Democrats are both parties of big business, and we are campaigning to build an independent, alternative party of workers and young people to fight for the interests of the millions, not the millionaires,” says the party’s website.

It is currently organizing resistance to policies of Trump, specifically the threats to deport recent immigrants, to defund sanctuary cities like Minneapolis and St. Paul and the attempt to reopen construction of the Dakota Access pipeline.

A Jentzen-led signature gathering project was successful in collecting enough valid signatures to place the $15 wage issue before voters last November. In August, however, the city council voted 11-2 to keep it off the ballot after hearing legal advice that it wasn’t a valid subject for a charter amendment. While a district court judge disagreed and ordered it to appear on the ballot, a city appeal to the Supreme Court successfully defended the council’s original decision to keep it off.

The show of support for the issue, however, led a majority of council members to support the idea and ask city staff to research and draft an ordinance for the council to consider this spring.

Jentzen was also a field organizer for the 2012 council campaign of Ty Moore, who identified as a Socialist Alternative candidate. Moore lost the race in Ward 9 to Alondra Cano by just a few hundred votes. He returned to the city from Seattle Wednesday to be the moderator of what he called a discussion on how to counter Trump and conservatives in the state of Minnesota. 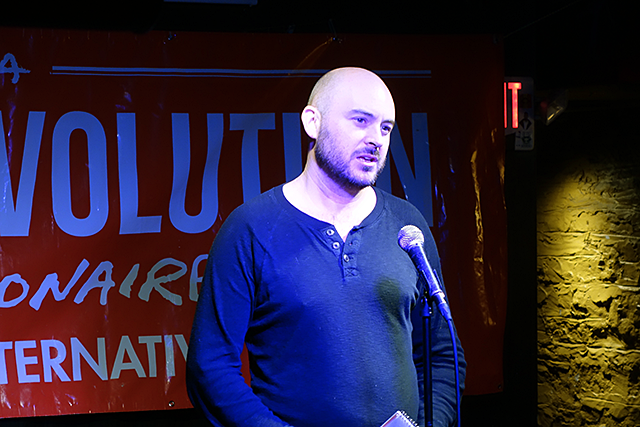 MinnPost photo by Peter Callaghan
Ty Moore returned to Minneapolis from Seattle Wednesday to be the moderator of what he called a discussion on how to counter Trump and conservatives in the state of Minnesota.

The Ward 3 council seat will become open when incumbent Jacob Frey files for mayor, something he has announced he will do. Already in the race are Samantha Pree-Stinson, Justin Adams, Maleah Otterson, Cordelia Pierson and Steve Fletcher. All but Pree-Stinson are listed on the Minneapolis DFL website as seeking the party endorsement when Ward 3 convenes May 6. The current council’s only Green Party member, Cam Gordon, said Pree-Stinson has told him she will seek the Green Party’s endorsement.

Some may not file for the office if they are not endorsed by the party but there is no legal restriction. And party rules require a supermajority for endorsement so if no candidate reaches that level, all would be free to run without breaking a promise to abide by the endorsement.

All who file will appear on the November ballot with the winner determined by the city’s ranked choice voting rules.

Among declared council candidates, Jentzen is most strongly associated with the wage campaign, but others also come out of social justice backgrounds. In Ward 4, candidate Stephanie Gasca is a labor and Latina activist who pushed the paid safe and sick time ordinance. And in Ward 1, Jillia Pessenda was a leader in the successful legislative campaign of Ilhan Omar. There are also several candidates to emerge from the police accountability movement, especially the protests that sprang from the November 2015 killing of Jamar Clark by a Minneapolis police officer.

Nekima Levy-Pounds, the former president of the Minneapolis NAACP, is running for mayor. Raeisha Williams was communications director of the NAACP and and an organizer of the Black Lives Matter movement. Fellow Ward 5 candidate Jeremiah Ellison (both Ward 5) was a vocal participants in the Black Lives Matter-led activities surrounding Clark’s death.

Correction: This article was updated to include Cordelia Pierson as a DFL candidate in Ward 3.