Legislators returned to the Minnesota State Capitol building this week after a messy, three-year restoration project — two months after a contentious election that ushered in 44 new lawmakers and gave Republicans control of both the House and Senate.

But any notion of a fresh start in St. Paul ends there.

The first week of the 2017 legislative session was dominated by failed issues of legislative sessions past, from tax relief and bonding projects to the problem-plagued health insurance exchange. The main push came from DFL Gov. Mark Dayton, who took to his bully pulpit to call on the Republican-controlled Legislature to take care of any unfinished business quickly in January, before the messy process of crafting the next two-year budget picks up in February and March.

That unfinished business includes taking up federal tax conformity, which was vetoed last year after Dayton’s administration discovered a drafting error in the tax bill that would cost $100 million over three years. He also wants legislators to pass a $1.5 billion package of bonding projects, after a nearly $1 billion bonding bill fell apart in the final moments of the 2016 session over partisan disagreements about light rail funding. Dayton said his new bonding bill, which includes many of the same projects that were proposed last year, would create a total of 23,000 new jobs.

It’s an unusual amount of activity for the first month of the first year of a legislative cycle, which is usually filled with ceremony and introductions.

“My old 9th grade teacher called it a make-up session,” Dayton said Thursday as he presented his $300 million tax bill for 2017, which included many of the provisions in the proposal he vetoed. “This should be seen as making up for what wasn’t done last session.”

But the lingering issue getting the most immediate attention is the skyrocketing insurance premiums facing people on the individual health insurance market. Dayton and legislators clashed all winter over an immediate relief package but couldn’t reach an agreement to call a special session of the Legislature. Jan. 31 is the deadline for people to sign up for 2017 health insurance coverage under the Affordable Care Act.

On Thursday, House and Senate Republicans rolled out their $300 million proposal to provide premium relief in 2017 and promised to act quickly. Their plan would include a three-month, 25 percent premium reduction for everyone on the individual market who does not qualify for subsidies — an estimated 123,000 Minnesotans. After three months, only individuals who make less than $95,040 annually or a family of four making less than $194,400 would qualify for relief. The money to pay for the proposal would come out of the state’s rainy-day fund.

“We call it the rainy day fund, and for a lot of people in Minnesota, it’s raining,” said GOP Rep. Joe Hoppe, R-Chaska, who is authoring the legislation in the House.

Quick premium relief is also a priority for Dayton, who rolled out his $313 million plan on the first day of session, but there are big differences between the Democratic and Republican proposals. For example, Dayton’s plan doesn’t include an income cap, and would instead extend relief for everyone who doesn’t qualify for subsidies for the entire year. What’s more, Dayton wants the state’s health plans to administer the premium relief, but Republicans want that handled by the Minnesota Management and Budget office, which would also determine who qualifies for reductions. MMB Commissioner Myron Frans said that would take months and be difficult for the agency to manage in the middle of tax filing season.

But everyone wants to move quickly toward a resolution. 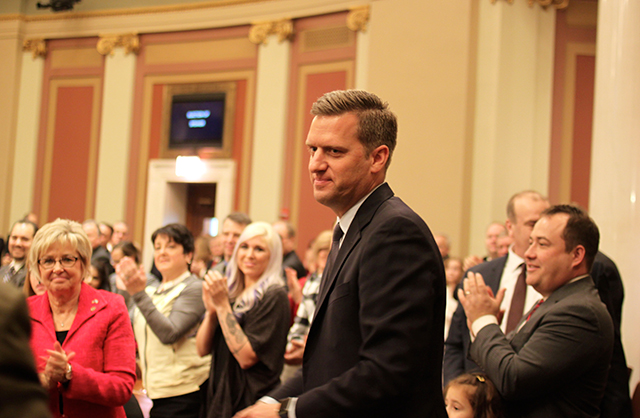 MinnPost photo by Briana Bierschbach
Kurt Daudt shown following his re-election as Speaker of the House.

Speaker Kurt Daudt said they would pass the premium relief proposal off the floor of the House by early next week. Senate Republican Majority Leader Paul Gazelka, who is dealing with a one-vote majority in the upper chamber, said they would move at a slower pace. But both parties want to have final bills in conference committee in the next two weeks and to start negotiations with Dayton.

How the health insurance debate unfolds over the next month will likely set the tone for the rest of the 2017 legislative session. This year, legislators must craft a two-year, $40 billion budget to avoid a state government shutdown. Last time Dayton was paired off with a Republican-controlled legislature, in 2011, gridlock led to a 20-day shutdown.

This time around, Daudt said Dayton’s relationship and interaction with legislators early on will be important. The two clashed repeatedly last year over policy issues, but the big blowup came in December, when the two stormed out of public negotiations over how to tackle immediate premium relief.

Dayton and Republican legislative leaders met privately on the first day of session, and they hope relations are friendlier during session.

“With any relationship it takes a little work once and awhile,” Daudt said. “I want him to participate more actively in the legislative process.”