Backers of a new plan to fund future mass transit lines without any construction dollars from the state Legislature went before a joint House and Senate transportation committee Tuesday.

The plan would dissolve the five-county Counties Transit Improvement Board — one of the main mechanisms for funding light rail and bus rapid transit in Twin Cities metro area — and allow those counties to double their local transit sales taxes. The extra money collected would be enough over the next decade to cover the entire non-federal share of projects planned for the metro, including Southwest LRT, the Bottineau light rail extension and the Gateway bus rapid transit.

So what’s not to like? The plan, which does not need legislative approval, would relieve the state Legislature of its obligations under the current funding model, which requires the state to cover 10 percent project costs, which have ranged in price from $800 million to $1.8 billion. And it takes away one of the biggest obstacles to an overall transportation agreement between Democratic Gov. Mark Dayton and Republican lawmakers.

As became clear during the joint hearing Tuesday, which was called in order for committee members to be briefed on issues involving Met Council and CTIB, there’s plenty for Republicans at the capitol not to like.

One of lawmakers’ objections involves an aspect of mass transit funding that will not change under the proposal to dissolve CTIB. Currently, the state government and CTIB split the annual operating subsidy for light rail, the North Star commuter rail and the Red Line highway bus rapid transit line. And Hennepin County Commissioner Peter McLaughlin said the hope is that the 50-50 split would be maintained, except that the counties themselves going halfsies with the state. That means that with each new transit line, the state’s half would grow significantly. Half of the operating subsidy for the Green and Blue lines this year is $24.5 million.

Similar numbers would flow from the state for the Southwest and Bottineau light rail lines. So would the state, which would no longer be in a position to approve construction of these lines, still be expected to pick up those added operating costs? asked Sen. Scott Newman, R-Hutchinson.

Well, yes, answered McLaughlin. But those increases won’t materialize for four years or more, when the lines begin operating, so there is time to come up with other ways of making up those expenses, he said. McLaughlin, who serves at the chair of the CTIB board, said the added costs were significant but manageable. And the state would trade some uncertainty in its obligation for operating subsidies for certainty in terms of construction costs. 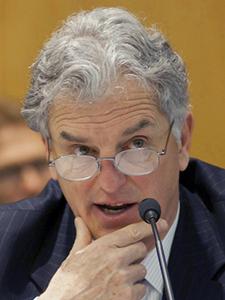 Republicans on the committee didn’t seem as intrigued by the trade as McLaughlin was. While they might not have a say in whether CTIB dissolves, they do have a say in the state budget. And it is from those direct state appropriations to the Met Council that the operating subsidies for transit lines materialize.

Metro Transit already faces future operating deficits, based partly on a decline in revenue from the motor vehicle sales tax. The numbers could get worse if the House and Senate cut the current appropriation to the Met Council for transit, something that was threatened last year.

There is also concern that as existing and future lines age, they will need to be maintained and replaced. Would those capital costs paid without state help or would they be included in the state’s 50 percent operating costs obligation?

Those were the specific concerns. The hearing also revealed that a general opposition to light rail as a mode of transit hasn’t seem to have faded among Republicans. Rep. Linda Runbeck, a Republican from Circle Pines who is chair of the Transportation and Regional Governance Committee, said she still thinks light rail is a bad use of tax dollars, whether they come from statewide taxpayers or those in Hennepin and Ramsey counties.

“The benefits do not match the investment,” Runbeck said after Tuesday’s joint hearing. She termed it “presumptuous” that the Met Council and CTIB leadership thinks the state will maintain that half-and-half share of operating subsidies on all current and future lines. “It’s interesting that they think it’ll be copacetic,” she said. “I’m not sure it is.”

As to the promise that the state will be off the hook for construction costs, Runbeck said: “I think they’re just getting us out of the way for a few years and then they’ll be back,” perhaps after a future change of majority control of the Legislature.

“I think it’s still the elephant in the room,” she said.

The first step toward breaking up CTIB happens Wednesday morning. The board — which includes two members from Anoka, Hennepin, Ramsey, Dakota and Washington counties plus Met Council Chair Adam Duininck — is discussing a resolution giving “preliminary intent to dissolve” the organization. Ultimately, approval must be approved by all five counties.

McLaughlin said he thinks it could be put in motion as soon as the spring. After paying off current obligations — bond repayment, operating and capital obligations already made — the money left over would be distributed to the counties. Each county commission would then decide how much of the addition 0.25 percent sales tax they would impose. That is the difference between what is permitted by the state for CTIB counties and the 0.50 percent permitted the 82 counties that are not part of CTIB.

The main point of contention at the Wednesday meeting was how current CTIB obligations would be satisfied — and how revenue already collected would be distributed. The smaller counties have raised questions about a Hennepin County proposal that would have a large share of 2017 obligations for Southwest and Bottineau light rail lines being paid during the dissolution. Not doing so would leave more money for distribution to the smaller counties and less for Hennepin.

The CTIB board, after the debate that exposed the tensions between the larger counties and the smaller counties, voted 8-3 to approve a resolution to begin the process of dissolution. Voting ‘no’ were one of two commissioners from Anoka County and both commissioners from Dakota County. The final dissolution vote must be ratified by a majority vote of all five county commissions.

Clarification: This article was updated to clarify that the proposal is to take the state out of funding for construction of new mass transit lines but not ongoing operations. It also changes reference to the Gateway bus rapid transit line which would run adjacent to I094 but in dedicated travel lanes.

Republican lawmakers push back on plan to dissolve transit funding board