It’s eight years away. At best. And there remain some sizable hurdles to clear between now and then. But that hasn’t discouraged some in the Twin Cities from imagining something previously thought improbable for downtown Minneapolis: a central role in a national park.

The dream centers on one of the most-visited pieces of land in the region, around the lock and dam at the Upper St. Anthony Falls that sits below the Stone Arch Bridge. And the idea is to create a park experience to tell the story of the Native Americans who preceded the region’s white settlers as well as the industries that tapped the power of the river to build the city.

“We now have a great, sort of unanticipated, opportunity to think about plans for what’s next at that lock,” said Christine Goepfert, senior program manager for the National Parks Conservation Association, a nonprofit advocacy organization that sponsored an open house last month to talk about making it a key piece of the Mississippi National River &  Recreation Area.

Other than being available to release pressure during flooding — something done just six times since it was completed in 1963 — the lock has little use to the U.S. Army Corps of Engineers, which currently operates it.

The lock was closed to watercraft navigation in June of 2015, the result of a 2014 decision by Congress as a way to halt the progress of invasive carp, though the facility still houses a small visitor center that offers tours during the summer run by National Park Service staff.

In other words, if the concept is ever realized, you can thank a really ugly fish.

And with the lock itself in caretaker status, the agency hopes to receive funding to begin what it terms a “disposition study” to answer whether it is still worth having the federal government own and operate it.

Nan Bischoff, a project manager for the Corps in St. Paul, said the study would look at four options for the structure: maintaining it; deauthorizing and disposing of it; transferring it to another governmental entity; or creating another use for it, like recreation. The last option would require congressional permission and a sponsor to take it over.

If the Corps identified the National Park Service as the best sponsor, the agency is likely to get an enthusiastic response. “Few places on the entire Mississippi can match its national and international significance,” said John Anfinson, the superintendent of the Mississippi National River & Recreation Area. 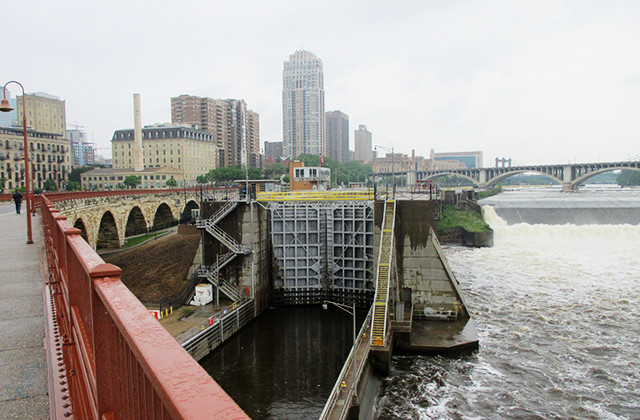 MinnPost photo by Peter Callaghan
The lock was closed to watercraft navigation in June of 2015, the result of a 2014 decision by Congress as a way to halt the progress of invasive carp.

So what would a St. Anthony Falls national park facility look like? Thomas Meyer has been thinking about that question. That is, how would a facility worthy of the park service label be built amid the lock and dam — a 60s era steel and concrete machine meant to use the flow of the river to lift and lower boats 50 feet?

Meyer, an architect and founding principal of MSR Architecture who designed the Mill City Museum, has been exploring future uses of the lock site as well as adjoining parcels on the central riverfront. 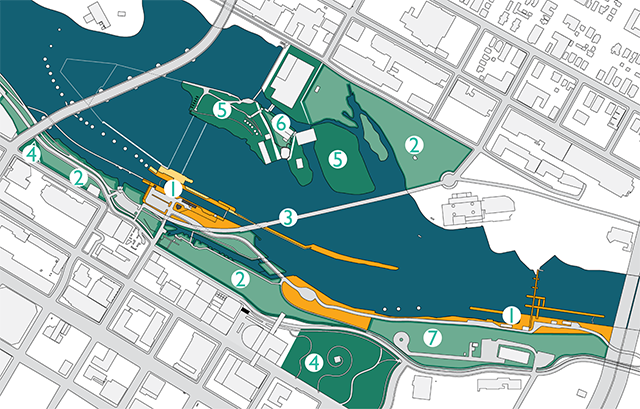 He said the timeline for a new facility at the locks will likely follow the process for the museum, which opened 12 years after the building was damaged by fire. “We’re starting now a process that might take eight or 10 years to come to fruition, but this is how they start,” he said. “We’re not here to design the project but to pull together a vision.”

That vision depends upon the lock structure and surrounding Corps property being turned over to the National Park Service, either formally or through an agreement with the Corps. An expanded office and staff building on top of the lock could become a place for visitor orientation, food service, restrooms and indoor and outdoor viewing of the falls.

But Meyer also envisions ways of getting visitors much closer to the falls than they can be now. There is a small piece of land on the river side of the lock — the remains of Upton Island — that he thinks could be reached by visitors. And he has sketched out walkways over the yellow mooring pylons that once guided vessels into the lock from upstream, a portage for canoe and kayakers, and even thinks there are ways to get people inside the lock. “I would call them natural places where people would want to go and explore,” he said of the various landings and vistas.

The National Parks Conservation Association’s Goepfert has stressed that the exploration of adding the lock to the existing recreation area is not a governmental undertaking but is intended to work with the Corps of Engineers and the National Park Service. It will run concurrently with the Corps’ disposition study.

“What we’re hoping to do is set the stage for the vision so when they get to the end of their process they’ll say, ‘Well, the community has really already come together and had a discussion about the future of that lock,’” she said.

But hurdles remain. In his presentation at the open house, Meyer noted what many consider to be the biggest one to creating a centerpiece to the MNRRA: Crown Hydro.

The Minneapolis company holds a license from the Federal Energy Regulatory Commission to build a small hydroelectric project at the site. The company would capture water from the river, run it through traces to turbines embedded beneath Corps property next to the lock and dam, and then through new tunnels back to the river below the lock. 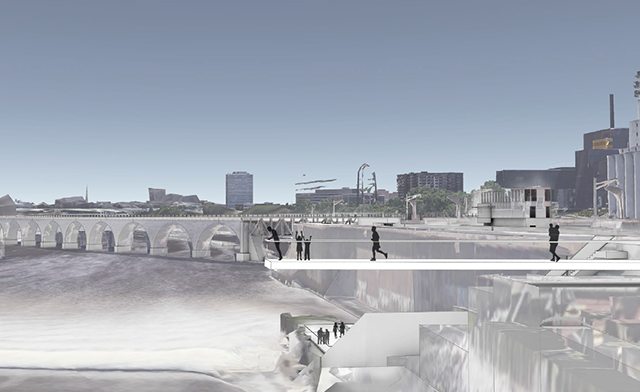 Courtesy of MSR Architects
A rendering showing the means by which visitors could reach the falls.

Initially backed by Xcel Energy  — which would purchase and distribute the power generated by the turbines — Crown Hydro has been trying to build the project for 25 years. The company’s initial plan was to place turbines in the basement of the nearby Crown Roller Mill Building, but no deal could be reached with the owners. Next, they were to be placed on park board land near the old Fuji Ya site, but that too failed to be finalized. When FERC ruled that the park board couldn’t be compelled to allow the project, Crown Hydro turned its attention to a project completely within Corps property.

Opponents, which includes nearly everyone and every organization with an interest in the river, the falls and the park — have argued that the project has changed so much since it was first licensed in 1999 that Crown Hydro should be required to start the regulatory process over. Objections include noise and disruption to the central riverfront; the threat to the aesthetics of the falls during low-water flows; fear about the foundations of the Stone Arch Bridge from outflow tunnel boring; and, finally, the effect Crown Hydro would have on any Park Service project at the site.

In his letter of opposition to the project, U.S. Rep. Keith Ellison wrote that the relatively low output of the project — about 3.4 megawatts — makes the disruption not worth the power. He wrote that the Crown Hydro project “is in conflict with nearly all” of the riverfront reclamation projects, including the national park concept. Also opposed are the Minneapolis City Council and the Minneapolis Park & Recreation Board.

Goepfert said last week that Crown Hydro is “one of those unknown factors that we have to account for. We know there are implications for how we could use that space should it go in.”

‘We take up so little space’

Two company board members were at the recent open house to discuss the national park concept, and Goepfert said they approached her with an offer to work with park planners. “They shared that they felt all these projects could be moving forward together,” she said.

Crown Hydro’s CEO William Hawks said he thinks his project “is in the best shape we’ve been in. We’re real confident.” But he also joked about how long it has taken for FERC to process the amendment to the license. “There’s ‘time,’ and then there’s ‘FERC time,’” he said.

But Hawks, who has been working on the hydro project since 1992, said he was “very, very excited” to hear that Goepfert and other backers of the park concept such as Friends of the Lock & Dam are willing to meet with him.

“From an engineering standpoint, we don’t interfere with them,” Hawks said. “If there is any interference, now is the time to talk about it and maybe there’s some engineering solutions. If they’re open to it and reach out to us, we’re gonna help them.

“We take up so little space,” Hawks said. “They’re gonna be amazed. They’re gonna feel bad that they thought we were an obstacle.”

Courtesy of MSR Architects
A rendering showing how the existing mooring cells on the upriver are used to approach to the lock.

Doug Verdier lives in a building overlooking the site and has been monitoring the Crown proposal as a volunteer for Minneapolis Park Watch. Like others, he said he thinks the project has changed so much — as has the area for which it was first licensed — that a new application should be required.

“The biggest problem I have seen with this project is Crown Hydro has lacked transparency,” Verdier said. “That’s why so many … are opposed. They think Crown Hydro is being dishonest.”

Still, Verdier said he doesn’t oppose hydropower, and thinks there might be a solution.“If a deal or something can be worked out where everybody gets something, I am not opposed to that,” he said. Verdier pointed to the small hydro project that helps power the renovated Pillsbury A Mill on the other side of the river is an example of how to work with the community and do a project right.

Correction: This article has been updated to make clear that any new or expanded park facility at St. Anthony Falls would become part of the existing Mississippi National River & Recreation Area and not a new national park. It also has been altered to remove a statement that the Corps does not run parks.  http://www.mvp.usace.army.mil/Missions/Recreation/

Amid obstacles, activists envision an audacious plan for Upper St. Anthony Lock and Dam: making it part of a national park