That’s why a district resident, Kelly Guncheon, organized an event Thursday night — to see if Paulsen would show up to listen and answer a few questions from the people he represents in Washington, D.C.

By the time the meeting kicked off at Plymouth’s Mount Olivet Lutheran Church at 7 p.m., the auditorium was filled to capacity, causing hundreds of people to spill into the chilly darkness.

The only one missing: Paulsen.

Julie Hoyme, of Plymouth, wasn’t surprised the five-term congressman wasn’t at the event, which drew more than 600 people, almost all of whom had come to express their displeasure with the policies of President Donald Trump, on everything from his executive orders regarding immigration to the Affordable Care Act.

“Erik Paulsen is a coward,” said Hoyme, standing outside of the church. “He doesn’t do town halls. I’ve heard he hasn’t done one in six, seven years.”

Guncheon decided to organize the event in response to Paulsen’s preference for engaging the public through telephonic town halls: “A few people are on the line,” Guncheon added. “They can ask questions, but only through the screener. So, there is no dialogue. And then, when it’s done, there is no recording of it. There is no transcript.”

Earlier this week, Paulsen’s office told the Star Tribune that he had held “more than 100 “in-person town halls, telephone town halls, and Congress on Your Corner events. He has already held two town halls this year and will continue engaging with constituents on all sides of the issues in a productive manner.”

Over the past week, town halls around the country have been inundated by protesters, who have challenged congressional members over their positions on various policies. Much of the effort has been spearheaded by Indivisible, a national movement organized around “resisting” the Trump administration and promoted by progressive groups such as MoveOn.org.

Thursday’s two-hour meeting wasn’t that, exactly. Guncheon, a financial planner who identifies as a political independent, titled the gathering “With or Without Him,” and provided participants with opportunities to review where Paulsen stands on key policies and to voice their concerns with the Trump administration.

Guncheon asked the crowd in the auditorium whether they agreed or disagreed that Congress mandate that the president releases his tax returns for review — to which they roared in agreement.

He also asked about a budget resolution to repeal the Affordable Care Act (aka Obamacare) and the Department of Labor’s rule on drug testing for those applying for unemployment compensation. Not surprisingly, the crowd disagreed with both ideas.

An hourlong comment session followed, during which some people “shamed” Paulsen for not standing up for his constituents and others pleaded with him not to look at issues based on the party line.

Jennifer Woessner, cancer survivor and public school teacher, was the first to open the session, voicing her support of Obamacare, while criticizing Paulsen for promising to repeal and replace the law during his campaign rallies last November. “The Affordable Act saved my life,” she said in tears.

Daniel Macdonald, of Eden Prairie, was concerned about the Trump administration’s flurry of executive orders that included barring some refugees from entering the country and deporting undocumented immigrants.

“I’m a 60-year-old white guy who’s a little heavy,” he told the crowd. “And I spent 40 years in corporate America, up to and including vice president of a large corporation. So, I’m your prototypical Republican, except I’m not.” 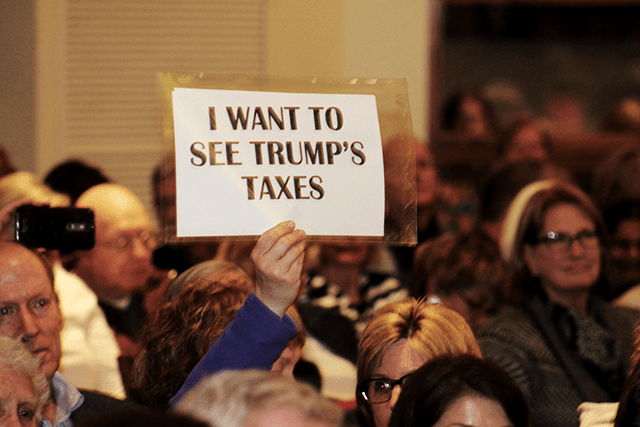 MinnPost photo by Ibrahim Hirsi
A town hall attendee holding up a sign demanding the president release his tax returns.

Macdonald then talked about adopting twin teenage girls from Colombia a year ago, meeting every Spanish-speaking family in his neighborhood and learning more about other cultures he wasn’t familiar with before. “They’re here for the same reason we are,” he said. “They’re working to make a living for themselves and their family.”

He added: “So, all this talk about immigration and walls needs to stop. I’m asking our representative to not vote the party line, to think for himself and represent us.”

As dozens of people inside the church took turns speaking into the microphone, Hoyme stood outside collecting names and notes from those who — like her — couldn’t make it inside the building because of the overflow crowd.

A woman in a nearby car got out of her car, walked up to Hoyme and said to her, “Here’s a small gift.” The woman then rushed back in the car.

“She just came and gave me mittens,” said Hoyme, who was shivering with cold. “I never met her before.”

Inside the church, Guncheon had just wrapped up the town hall meeting and the crowd began to trickle away — except for the nine or so people who stopped by to thank him for organizing the event.

“We wanted to do this for three reasons,” Guncheon told MinnPost. “We wanted to talk to Erik Paulsen and see if he would come and talk to us. We wanted to demonstrate that we could have a civil meeting and we wanted to show what community can do.”

Meanwhile, volunteers began to clean the church and collect posters and signs the town hall attendees had brought. One of them read: “Do your job! Respect your district! Not your radical Trump agenda!”

Another one read: “Where’s Erik? Hiding from constituents!”

Scenes from the ‘With or Without’ Erik Paulsen town hall (spoiler alert: it was without him)