The issue of Sunday liquor sales in Minnesota has come down to a numbers game.

On Wednesday, the score was 7-4 in the Senate Commerce Committee, enough votes to pass a proposal that would lift the state’s 158-year old prohibition on selling alcohol off-sale – i.e. in liquor stores — on Sundays. But even as they cast their votes Wednesday, many senators were thinking about a different figure: the 85 votes in favor of a similar bill on the House floor vote two days earlier.

Monday was the first time Sunday alcohol sales cleared either chamber of the Legislature, and it did so by a margin that surprised the most astute vote counters. Senators were also thinking about the number of emails they’ve gotten over the years from members of the public urging them to lift the ban, and about the number of independent liquor stores in their district that oppose the measure.

“In the last week I have visited a lot of the store owners, who in previous years had said they were against this, but I thought I’d [get some] background,” said Sen. Karin Housley, R-St. Mary’s Point. “A lot of them, especially since the House passed it, have changed their tune a little bit. They knew it was coming.”

The big question is whether the bill has the 34 votes needed to pass the 67-member state Senate, a vote that could come as early as next week. Momentum has been building to pass an issue that has repeatedly failed over the years at the Legislature, largely due to increased public pressure to lift the Sunday sales ban.

“I think we’re getting very close,” said Sen. Jeremy Miller, R-Winona, the author of the Senate’s Sunday sales bill. “This is the strongest grassroots effort on any issue I’ve seen during my time in the Senate from the people. I think it’s going to be closer in the Senate than it was in the House, but I’m hopeful that we have the votes to get it done.”

Part of the strategy of House Speaker Kurt Daudt, who is a co-sponsor of the Sunday sales bill in the House, was to push the issue early in the session to put pressure on the Senate to take action as well. The last time the Senate voted on Sunday sales was in 2015, when it failed on a 35-28 vote. This year, there are 21 new state senators who were sworn in after the 2016 election, complicating the expected vote totals.

The two freshman members on the Senate Commerce Committee, for example, broke different ways, with Sen. Mark Koran, R-North Branch, voting in favor of the bill, and Sen. Paul Utke, R-Park Rapids, voting against it. Utke said he supported his local independent and municipal-owned liquor stores, which have long argued that an extra day of sales won’t increase revenue but simply spread six days of sales out over seven days. Over the years, those voices have won in the political debate over Sunday alcohol sales (even if the data about Sunday sales doesn’t support their position).

“A lot of our liquor stores are municipal owned. They are a big asset to our communities and save our taxpayers a lot of money by adding monies to capital improvements,” Utke said. “I just don’t believe that we’re all going to go out and drink more because the stores are open another day.” 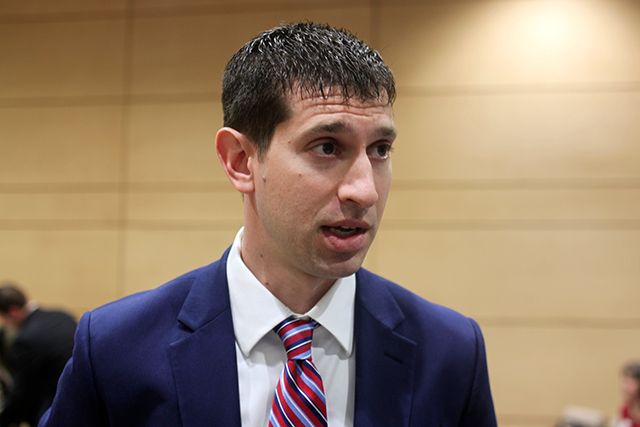 MinnPost photo by Briana Bierschbach
State Sen. Jeremy Miller: “I think it’s going to be closer in the Senate than it was in the House, but I’m hopeful that we have the votes to get it done.”

But there were several flips from Democratic senators who previously voted against Sunday alcohol sales, including Sen. Ron Latz, DFL-St. Louis Park, and Sen. Jeff Hayden, DFL-Minneapolis. Hayden said he recently polled is constituents on the issue and found them overwhelmingly in support.

“This is something that my constituents say that they want the opportunity to have,” he said. “Whether it’s a bottle of whatever kind of spirit to watch the Vikings game, or this Sunday, when I wanted to cook brats and I couldn’t cook them in any beer because it was Sunday and [the liquor store] was closed.”

Gov. Mark Dayton has said he’ll sign a Sunday sales bill if it lands on his desk, but there could be more stops before the bill reaches him. The House bill allows liquor stores to be open from 10 a.m. to 6 p.m. on Sunday, but the Senate sets the start time one hour later, at 11 a.m.

Miller doesn’t plan to amend his bill on the Senate floor, but other senators could move to change the language to match the House proposal. If that doesn’t happen, the bills will have to go to conference committee to reach a compromise, and then back to the floors for a final vote. If it passes all of those votes, only then will the bill go to Dayton.