After four months of debates, public forums, national media scrutiny, and hard campaigning around the country, Rep. Keith Ellison will not become the chair of the Democratic National Committee, losing his chance to serve as the Democrats’ standard-bearer in their fight against President Donald J. Trump.

On Saturday in Atlanta, the voting members of the DNC met to select a new chair, and in the end, they went with Tom Perez, the former Secretary of Labor under Barack Obama, who picked up the support of a majority.

The easy frame for the contest between Ellison and Perez was that it was a referendum on the direction the Democratic Party should take after its stunning defeat in the November election. Ellison was considered the champion of a more leftward direction for the party; Perez was the continuity choice, and the favorite of loyalists to Obama and Hillary Clinton.

With the race over, and Perez at the helm of the DNC, the party appears to have made its choice. What does it mean for the Democrats, and for Ellison’s future?

Vote months in the making

Though he formally announced his candidacy shortly after the November 9 election, Ellison had been laying the groundwork for a bid months before, after the July ouster of Rep. Debbie Wasserman Schultz left a vacancy at the head of the DNC.

Ellison entered as a clear front-runner, the only candidate with any kind of national profile. Though Ellison picked up support from establishment figures like Sen. Chuck Schumer, Democrats aligned with Obama and Clinton wanted an alternative, and successfully persuaded Perez to enter the race by mid-December.

That cemented the interpretation of the race as a proxy battle between the supporters of Obama and Clinton and those of progressives like Sens. Bernie Sanders and Elizabeth Warren. Both Ellison and Perez rejected that frame, even though their respective supporters did not, and the two waged a friendly campaign in which they largely declined to criticize each other.

For most of the race, no candidate emerged as a favorite, and in the days leading up to the vote, Ellison and Perez’s camps predicted strong showings to the press with conflicting counts of support among delegates.

That uncertainty led many to expect a lengthy, multi-ballot vote, with potential for some negotiation or even the emergence of a lower-tier candidate. But, gradually, others dropped out, and Perez locked up the race in rather short order.

After falling short by just one vote on the first ballot, Perez picked up 235 votes on the second ballot, clearing by 10 votes the threshold needed to become chair. Ellison got 200.

Why did he lose?

After his victory, Perez moved to name Ellison as deputy chair of the party, a position that had not previously existed in DNC leadership. Ellison accepted, though he will also retain his 5th Congressional District seat, which he had pledged to give up if he won the election to chair.

Perez’s gesture was seen as an olive branch to Ellison and his supporters, and the new chair plans for the post to be more than just symbolic. On Sunday, Perez praised Ellison’s skill as a communicator, and told the Star Tribune he wants the congressman to be “the face of the Democratic Party.”

Still, defeat stings for Ellison, and for his supporters. Why did he lose? It depends on who you ask.

Those in the press who followed the DNC race closely said that its collegial tone and aversion to even the appearance of infighting made it difficult for Ellison to distinguish himself from Perez. Their politics were largely similar, but Ellison could have made Perez’s support of the Trans-Pacific Partnership — anathema to the Democratic base — a bigger issue, and perhaps could have gained support from a debate on the topic, said the Washington Post’s David Weigel.

The length of the three-month race may have also played a role, giving Perez time to enter the contest and chip away at Ellison’s initial support.

Others believe that Ellison’s Muslim faith and views on Israel and Palestine sank him. The Intercept was quick to attribute Ellison’s defeat to a “scorched-earth smear campaign” by some Democrats, who targeted Ellison’s religion and his past ties with the Nation of Islam, a group he now denounces.

To them, that is proof that the Democratic Party is unwilling to learn from the mistakes that cost it the 2016 election, and will have a difficult path to winning elections again. 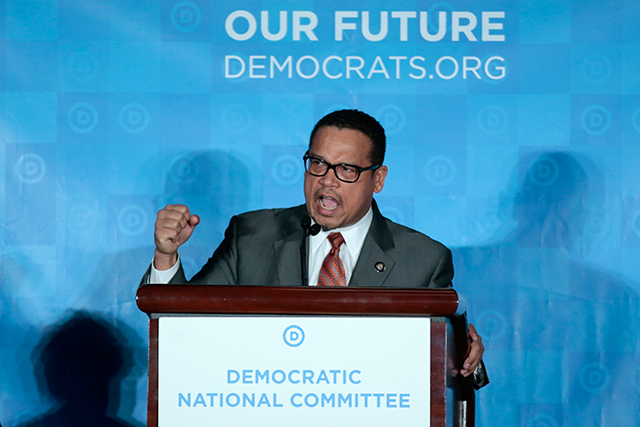 REUTERS/Chris Berry
Rep. Keith Ellison addressing the audience prior to the election on Saturday.

Online, the reaction to Perez’s victory was frustrated and defiant. Matt Bruenig, a popular left-wing writer, summed up the consensus, blaming the Obama-Clinton camp for recruiting Perez “in order to fight an internal battle against the left faction of the party.”

He argued that supporters of Ellison’s vision should leave the party behind, once and for all. “The left should focus its energies on organizing under alternative institutions that, if they engage with the Democratic party at all, only do so in order to attempt hostile takeovers of various power positions.”

Ellison himself urged the opposite: “I’m asking you to give everything you’ve got to support Chairman Perez,” he told his supporters after the election on Saturday.

On Twitter, Ellison — who did not give interviews after the dust settled on Sunday — has said the real battle comes now, as Democrats gear up to fight Trump. “Democrats are united,” he wrote, in a rebuke of the president’s claim that the race was “rigged” and that Perez won because Clinton “demanded” him.

Steven Schier, political science professor at Carleton College, expects Ellison to take on an increased role in battling Trump. “Trump has activated and incensed the left wing of the Democratic Party, and Ellison is the one leading that charge,” he said. “That may fuel future political ambitions for Ellison.”

Prominent Minnesota Democrats, moderate and progressive, lined up to back Ellison’s bid. Disappointment resonated on Sunday, but they have high hopes for their man.

According to Jeff Blodgett, a Democratic organizer and former aide to the late Sen. Paul Wellstone, Perez will be a good chair. Ellison, though, “would have added a grassroots energy which we need right now.”

“Tom Perez would be smart to use Keith substantially as the work goes on to rebuild the Democratic Party,” Blodgett said.

Former Minneapolis mayor R.T. Rybak, who finished up a stint as DNC vice-chair this weekend, told MPR that Ellison is “the leading voice of progressives who want to engage in the system and make it better.”

Others did suggest that if Ellison’s progressive message doesn’t resonate in the party going forward, they’ll have to take it somewhere else.

Bernie Hesse, an organizer with the United Food and Commercial Workers Local 1189 who supported Ellison, said “us grunts will continue to push, and I see a labor caucus emerging to either demand a true labor or working class agenda, or we will leave to restore a true labor party movement.”