It was billed as a discussion on how to keep the economic and cultural momentum of Minneapolis going. It turned into something more like an intervention.

Part of the “Kick-Ass Happy Hour” event series put together by Little, a design and branding company in the North Loop, the panel of speakers was asked to respond to this question: “We’re no longer the best-kept secret: We’re seen as a pretty kick-ass place to be. But how do we keep it that way?”

But at least one of the panelists, restaurant and retail entrepreneur Eric Dayton, wasn’t so sure about the kick-assedness of the place – at least not its downtown.

“Everyone points fingers at Amazon and the other reasons [Minneapolis’] downtown is dying — except looking in the mirror and asking ourselves, what are we doing wrong as a city?” he said.

‘I don’t have a lot of optimism’

Dayton initiated the idea of positioning the region as the capital of “The North,” and is one of the people trying to establish a trans-Twin Cities winter festival, The Great Northern. He kicked off the discussion by talking about the ultimate goal of another organization he founded: The Skyway Avoidance Society. “The goal is to bring down the Skyway system,” he said.

So is he really suggesting that the skyways — so rapturously beloved by many and grudgingly accepted by others — should actually be ripped from the facades of downtown buildings? It isn’t just another branding gimmick? “This isn’t an academic enterprise,” he said. “It’s not to get press. It’s really to try to change the city.”

As Dayton sees it, rebuilding streets — even if you program them from dawn until dusk  — won’t be enough to overcome the damage that results from dividing up downtown’s worker and denizens between the sidewalk and the skyway.

The idea for the society, Dayton said, came out of an article written for Mpls.St.Paul magazine by Alison Kaplan, following word that Macy’s was in negotiations to sell its Nicollet Mall building. Since the site was once home to the flagship store of the Dayton’s retail empire, Kaplan proposed that the family members buy it and make it into something cool and productive.  “Unfortunately,” Dayton says he told Kaplan, “I don’t have the optimism about downtown right now. I wish I did.”

After thinking about it more, he said he sent Kaplan a message, one he describes as half tongue-in-cheek but half serious: “I’ll buy the building if you bring down the skyways,” he told Kaplan.

“I’ve always thought that a crisis is a terrible thing to waste,” he said. 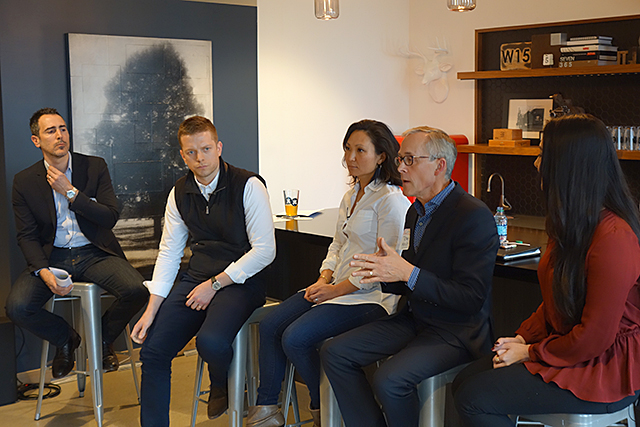 The closing of Macy’s, as well as and Barnes and Noble and Saks before it, should be a wake-up call for downtown, he said. Other cities of similar size have retail downtown, yet they too have Amazon and suburban malls to deal with. “So there’s something unique about Minneapolis and downtown retail,” Dayton said.

It isn’t just the skyways, he conceded. But the skyways are part of a 1970s-era attempt to recreate a suburban mall atmosphere downtown with inward-facing shopping areas like City Center and others. “I’m personally not happy with it,” Dayton said. “I’d like to see our city repositioned for the next 50 years rather than positioned based on 50-year-old urban design.”

Nicollet Mall to the rescue? Not so much

One of the other panelists, invited before he became an announced candidate for mayor of Minneapolis, was Tom Hoch. The recently departed president of the Hennepin Theatre Trust is also the outgoing president of the Minneapolis Downtown Council. Both as a political candidate and as a promoter of downtown, Hoch wasn’t likely to endorse the demolition of the skyways.

He did, however, agree with the value of human beings on the sidewalks. “If you’ve got lots of people on the street, then you’ve got retailers thinking, ‘There are people who could shop in my store,’” Hoch said. “If streets are attractive and they feel safe, that moves us a long way.”

But the mention of safety triggered a response from Dayton. “I think potentially the more compelling argument for the skyways coming down is the safety issue,” he said. “If we want safe streets in downtown Minneapolis, we have to reclaim our streets. If we leave them empty, we create a vacuum. Somebody’s gonna fill that void.

“We can’t eliminate everyone downtown who makes us uncomfortable. That’s not how cities work,” he said. “What we do is change the ratio…If you are walking down the street in New York or San Francisco, that person is still there but there are hundreds of people around you and it’s not a big deal.” 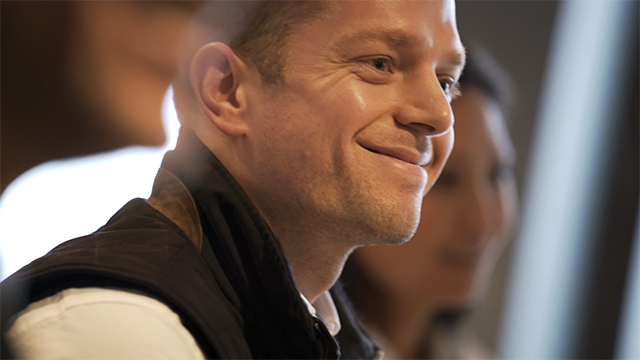 Photo by Thomas Strand
Eric Dayton: “The goal is to bring down the Skyway system.”

Another panelist, Ann Kim — who owns Young Joni, Pizzeria Lola and Hello Pizza — said that she spent eight years in New York City in college and after and can’t recall ever feeling unsafe on city streets.  But “when I’d come home from college, I felt unsafe walking because, again, safety in numbers,” Kim said.

The reason she and her husband/partner put their three restaurants in city neighborhoods and not in strip malls or downtown is because they provided a sense of community, she said.

In response to audience question about the long wait for the new Nicollet Mall and whether it would do more harm than good for downtown, Dayton brought the discussion back to the negative impacts of the skyways. “I’m hopeful that it’s good,” said Dayton, whose most visible businesses are the Bachelor Farmer restaurant and Askov-Finlayson retail store, both of which are located in the North Loop. “I just know that it’s not going to solve downtown’s problem on its own.”

He also doesn’t have high hopes for the “new” Nicollet Mall: “I disagree with the idea that Nicollet Mall will be must-see and that will make us a world-class city,” he said. “Not having an ugly city is not differentiating … I’m glad that it’s going to be more attractive than it was. But if we’re really going to hang our hat on that to save the day I think we’ll be disappointed.”

Downtown, he said, needs retail stores and restaurants that attract people. Getting those things, however, requires creating an atmosphere and a density where such places can succeed.

But at least we’re getting the Super Bowl, right?

Hoch said the event is an opportunity to sell the city, but quickly added that the events and traditions should first appeal to people who live here. Dayton agreed, and said that moving the Great Northern festival, which combines winter events from both Minneapolis and St. Paul, to the weeks surrounding the Super Bowl will be retained in the future.

“We need to create our own traditions,” he said. “Let’s not create them for a bunch of out-of-towners who come here one time and then leave. Let’s create them for ourselves and make this a better place for us.”

Moderator and Little president Joe Cecere said that Minnesotans love being high up on best places lists. But if there was a list of things that the state and region were bad at, what would they be?

“We don’t always operate in this realm of ideas and big ideas,” Hoch said. “What do we want our city to be? Where do we want it to go? What would it look like?”

Added Kim: “We don’t want to win. We don’t want to be first. Maybe it’s part of Minnesota Nice. Work hard. Don’t ruffle feathers. Persevere. Be the good city. We should say, ‘That sucks. We need something better. We have, I don’t know, be a little nastier.”

For his part, Dayton cited the region’s aversion to risk. “We play it safe,” he said. “Our young people, when they graduate from college, they go work for whatever big company it is. There’s nothing wrong with that, but the rest of the country people are starting companies right out of college. We need to start encouraging people to take that risk, recognize the people who take that risk.”

Can downtown Minneapolis save itself?