One morning each spring, in a Capitol hearing room, you hear some things you don’t typically hear in Washington, D.C.:

On Wednesday, Minnesota lawmakers and their staffs gathered for that rare occasion: the annual Minnesota Congressional Delegation Hotdish Competition.

The seventh iteration of the contest, hosted by Sen. Al Franken, has evolved into a highly anticipated occasion for Minnesotans working on Capitol Hill — an opportunity for fun, mock-serious competition and Minnesota in-joking, all in the name of bipartisan comity and a hot, cheesy lunch.

This year’s competition saw a first-time winner earn the coveted hotdish-pan-shaped hotdish trophy: Rep. Collin Peterson’s “Right to Bear Arms” hotdish — featuring meat from a bear hunted by one of Peterson’s staffers — took home top honors. (Peterson admitted the bear was hunted on Wisconsin soil, citing regulations from the Minnesota DNR, whom he did not want on his property.)

Tied for second were GOP Reps. Tom Emmer and Jason Lewis, both first-time runners-up. Lewis’ “Minnesota Wild Rice” dish, featuring a cut-out of the Wild logo, was a hit, as was Emmer’s “Sunday Beer Run and Brat Hotdish.”

Judging the entries for taste, presentation, and originality were Norm Ornstein, a top scholar at the American Enterprise Institute and a St. Louis Park native, Mee Moua, the first Hmong woman elected to the Minnesota legislature, and Dr. Ed Ehlinger, commissioner of the Minnesota Department of Health.

After a divisive election season that has led to rancorous partisan warfare in Washington, the mission of the Hotdish-Off — to foster good feelings and fun across the aisle — might be more critical than ever.

Franken said as much as he took the mic at the start of Wednesday’s proceedings. “I think this is the most important Hotdish-Off ever,” he said, clad in the red apron he wears for the contest. “What this is all about is being neighbors, sharing food, sustenance, hearty prairie dishes.” 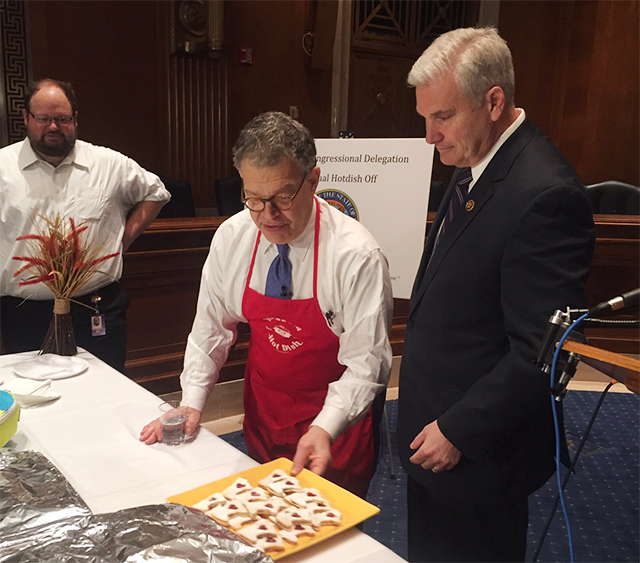 Sen. Amy Klobuchar said that the Minnesota congressional delegation has always been cordial, adding that Hotdish-Off is a great representation of that. “It’s an example of how we believe, in our state, in civility in politics, working across the aisle.”

At the same time, some entries this year didn’t shy away from political statements. Klobuchar’s own entry, “Minnesota Melting Tot,” incorporated ingredients from a variety of ethnic groups with deep roots in Minnesota, from Swedish meatballs to Somali coriander and Laotian rice.

Rep. Keith Ellison made waves with his “Solidarity Kugel,” a vegetarian kugel garnished with red vegetables in the shape of a Venus symbol. 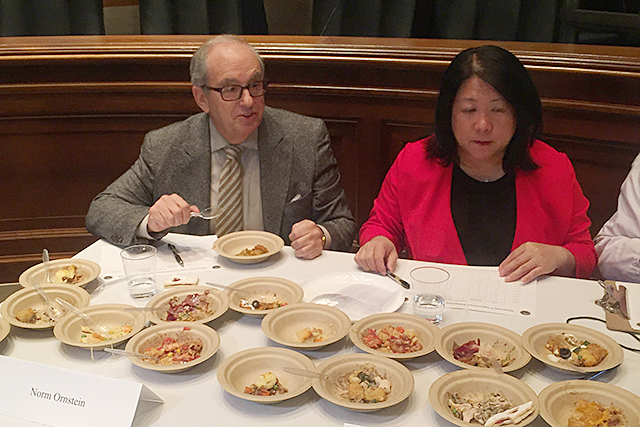 “It’s International Women’s Day, and we have to stand with the women of this world,” Ellison said. “So why not say it through hotdish?” (He also refuted criticism that his kugel, a noodle-based, traditionally Jewish dish, was not a hotdish. “They told me it was technically a hotdish because you bake it in a pan. We slipped under the wire.”) 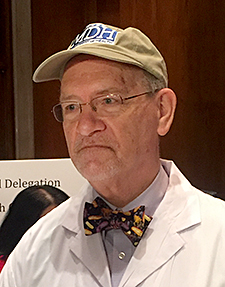 Minnesota’s politicos also had a tough time keeping even light-hearted mentions of the day’s top issues out of the competition’s proceedings.

Franken, in taking stock of which members were present, noted that Rep. Erik Paulsen was absent — his Ways and Means Committee was, at that time, considering the GOP’s Obamacare repeal and replacement bill.

“Erik Paulsen can’t be here today because he has a markup on the wonderful health care bill,” Franken said. Lewis, a vocal critic of Obamacare, chimed in, to laughs: “Glad to have you on board, Al.”

A topic of bipartisan agreement, though, was the growth of the Hotdish Competition into a bonafide expression of culinary creativity and Minnesota culture.

“We’ve never had so many amusing and interesting names,” Klobuchar said, lauding the entries’ “spectacular presentations.”

Dissenting, Rep. Betty McCollum (a one-time winner herself) lamented the trend toward gratuitous cheese and the use of tater tots as the base for nearly every entry.

Ornstein, a judge, disagreed. “I was afraid there’d be a lot of just heavy starch, but there’s some real tasty stuff here.”

After declaring this year’s competition “the best ever,” Franken reflected on the need to sustain the “bonhomie” generated by the competition. 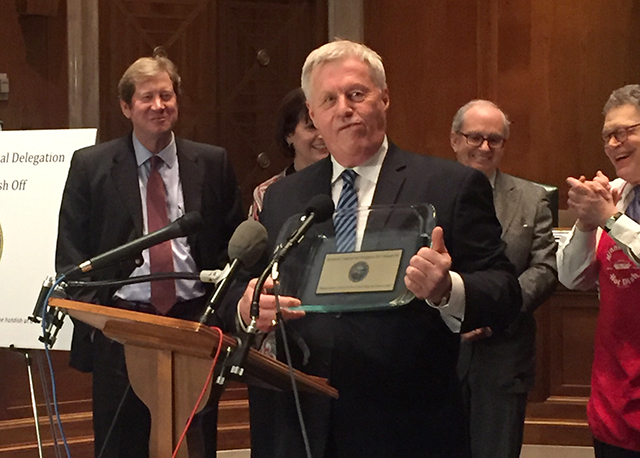 “We’ve got to carry this forward from this day on,” he said in a deadpan, then pausing, as the senator occasionally does when he’s not being totally serious.

When asked if the good vibes would carry forward to the contentious debate about health care that lay ahead, he demurred. “Yeah. That might be hard. But we’ll try.”

He then glanced at the table where guests were sampling the hotdishes. “Wow,” he said, “this stuff’s getting eaten!”

You can check out the recipes for all ten hotdish entries on Sen. Franken’s website.