Since January 27, the stories have flooded in: a family with two kids worried because one of their children has a Kenyan passport, the other, a Somali passport; the adoption of a child in Lebanon gone awry; an Iraqi-born U.S. soldier trying, and failing, to get his brother into the U.S.

These are some of the dilemmas that befell Minnesotans in the wake of President Donald Trump’s first executive order, which banned nationals of seven Muslim-majority countries — Syria, Iraq, Somalia, Sudan, Libya, Yemen, and Iran — from traveling to the U.S. and placed an indefinite ban on refugee resettlement.

The order’s implementation was a mess, leading to the detention of over 100 people at U.S. airports, many of whom were legal U.S. residents or had valid travel visas; many more with similarly legal status had travel plans complicated or dashed entirely.

In Minnesota, which has the nation’s largest population of Somalis and is a top destination for refugee resettlement, many people were scared and uncertain as to how, or if, the order might affect them.

In many cases, they did what many people do when they have questions about the impact of the federal government’s decisions: they called their senator or congressman to ask for help.

Some of Minnesota’s congressional offices have received hundreds of calls from constituents about Trump’s executive orders — some are simple questions that get resolved quickly, while others evolve into complex, weeks-long cases.

After court intervention, Trump walked back that first order. But with and a new order set to take effect in just a few days, Minnesota’s congressional offices are bracing for the next wave of calls and cases.

‘It’s been a bit unprecedented’

Though the initial order was only in place for a little more than a week, it instantly created complicated situations with ripple effects that persist today.

The task of helping people navigate the aftermath has fallen to immigration lawyers, activists, family members and, increasingly, congressional offices.

Over the years, the task of helping constituents navigate the federal government has become a central function of a congressional office. Senators and House members alike employ teams of staffers in D.C. and their home districts to assist constituents on a variety of needs — everything from quickly issuing a passport in an emergency to securing a hard-earned Veterans’ Administration benefit.

These staffers have dealt with urgent work before — tornadoes, tsunamis, bridge collapses. But the past few weeks, members of Minnesota’s constituent services teams say, have presented a unique challenge.

A combination of a flood of worried constituents, a sudden rise in emergency cases, and an atmosphere of confusion in the federal agencies tasked with enforcing Trump’s order, have made their jobs very difficult.

Jamie Long, the district director for Rep. Keith Ellison, said the immigration system hasn’t always been smooth, and that his office historically has more immigration cases than vets’ or benefits cases.

“It’s always been a big issue,” he said. “But this level of concern from the community is unprecedented in my time in the office.”

“It’s been a bit unprecedented in the volume of people who are calling,” said Ben Hill, the director of Sen. Amy Klobuchar’s state office. “When the original order came out on January 27, people were caught off guard by it, it was difficult to get a sense of who was going to be affected.” 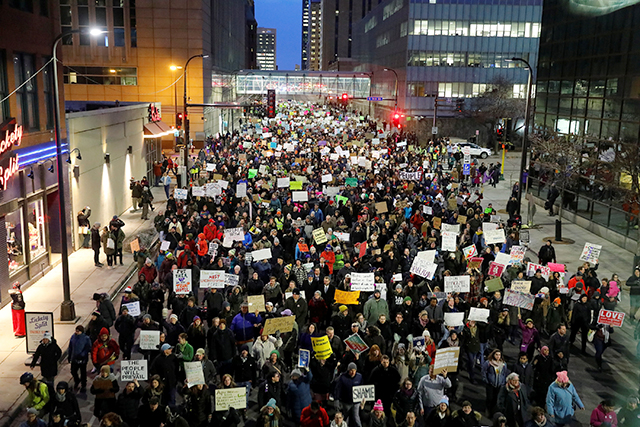 The bulk of calls and cases have gone to Klobuchar an Sen. Al Franken, owing to their statewide purview, and Ellison, who represents many who could be affected by the travel ban. (Republican offices, like that of Rep. Tom Emmer, say they have gotten calls and cases as a result of the ban, too.)

Franken’s office has received 2,500 calls specifically about the travel ban since it was introduced — about 80 a day — ranging from people simply expressing their opinions to those concerned about how the ban might affect them or a loved one. Franken’s office currently has cases open with 30 constituents as a result of the executive orders.

Klobuchar’s office says it has received about 100 calls from people specifically asking about how the executive orders would affect them or their families, and has handled ten so-called “emergency cases.”

“Up to this point, we have successfully helped people who have called with these emergency situations who have gotten back into the country,” says Hill. “That’s been a positive aspect in an otherwise distressing situation.”

One example of such a case, touted by both Franken and Klobuchar and picked up widely in Minnesota press, was the story of Mushkaad Abdi, a four-year old refugee from Somalia who was in a Ugandan refugee camp and had been separated from her mother, Samira Dahir, who was living in Minneapolis.

The family in Minnesota had finally secured Mushkaad’s immigration to the U.S. at the end of January, but four days before her scheduled arrival, the order came down, blocking her entry into the country. After pressure from Minnesota’s senators, which included phone calls to Homeland Security Secretary John Kelly, Mushkaad was reunited with her family in Minnesota in early February.

Klobuchar’s office also worked with the Rahme family, of Mankato, who had adopted a two-year-old son in Lebanon, but faced difficulty because the child was born in Syria. As they worked through the adoption process, the order resulted in U.S. authorities stalling in issuing the boy’s visa since he was technically a Syrian national. Klobuchar’s office says they worked with the Department of State to help secure the child’s travel to the U.S.

There are not always happy resolutions, however. Ellison’s office dealt with a particularly difficult case: a man in the district had been waiting for three years for his wife and infant child to move to Minnesota from Somalia. After the order was signed, the man decided that their chances of making it to the U.S. were too slim, and they began making plans to relocate to a different country where they could reunite.

There are, after all, limits to the power of a congressional office with complicated cases like these.

A personal phone call from a senator to a high-level official can make a big difference in a case that’s already gotten attention, particularly one that involves a child. Cases less urgent than that of Mushkaad Abdi, however, can take much longer.

Casework staff is very familiar with the grinding nature of that work, and they draw on close professional contacts at relevant agencies: State, the Department of Justice, Homeland Security, and the branch of that agency, U.S. Customs and Immigration Services, which is the front line for these cases.

“It’s been a full time occupation for several members of our staff to help folks deal with the consequences of the EOs,” Long, in Ellison’s office, explained.

“One of our staffers worked three weekends straight. Another one of our staff members who deals with immigration and casework found himself making calls to embassies at two A.M., our time, to be able to help deal with getting paperwork in time to help cope with some of the questions folks were having in a timely manner.”

Minnesota staffers say they largely haven’t noticed significant changes in the federal agencies they deal with since Trump took over. Their contacts tend to be career public servants who will serve multiple presidential administrations.

Clara Haycraft, who directs constituent services for Klobuchar, says “I have a liaison I’ve worked with for almost a decade. I’m able to pick up the phone and have her walk me through the specifics of how the EO would affect constituents and how we can help.”

Still, the confusing roll-out of the order has meant that these career officials can sometimes be less helpful. “I will say,” says Long with Ellison’s office, “that there was some confusion on the end of a lot of career folks as well in terms of what they were allowed to share and not share. Some of the information we were used to getting we had more trouble getting.”

Beyond working cases, the offices have spent a lot of time on the phone with constituents who have simply called to ask if they might be affected by the order.

According to one casework official, a frequent type of call has been from people who aren’t affected by the order, but are worried that they somehow could be held up in travel, or are scared they could be affected in another executive order.

In those cases, sometimes offices will give the constituent an official letter, to show while they are traveling, explaining their circumstances, or they’ll send that letter to relevant U.S. or foreign authorities.

Gearing up for round two

The second version of the travel-ban order takes effect Thursday, and Minnesota offices are preparing for a new influx of calls, and a fresh round of cases.

The new order is considered to be narrower, and more likely to survive a court challenge, than the original. It excludes Iraq from the list of targeted countries, and the ban only applies to nationals who don’t already have a valid visa. The refugee ban is also limited to 120 days, rather than indefinitely.

Caseworkers anticipate confusion from constituents about the differences between the new rule and the old one, and expect to spend a lot of time explaining those differences.

“It’s difficult to predict,” says Hill with Klobuchar’s office. “The new order established waivers and exemptions, people are going to continue to call with questions and we’re going to have to continue to play a role in being a resource for people.”

According to Long, “We’re still anticipating there will be a number of concerned folks when it goes into effect… We’re anticipating that we’ll have a similar spike to what we saw around the first executive order.”

For Democratic members in particular, this type of casework is ideal: it combines traditional constituent service aims — cultivating positive relationships and personal ties in the state or district — with the political aim of pushing back against Trump’s orders.

It’s not a shock that these lawmakers are eager to showcase their offices’ work with constituents on the travel ban. For the staffers who handle the issue, however, it can be deeply personal. Several of the offices employ caseworkers who are immigrants themselves.

Klobuchar’s Haycraft, for example, is a first-generation immigrant from Burma. “I know what it’s like,” she said. “We’ll continue to help people, as much as we can.”