There’s now more information about how Wells Fargo’s years of shady sales tactics affected Minnesota: In a document submitted to congressional finance committee members, Wells Fargo estimated that a combined 31,000 savings, credit, and deposit accounts in Minnesota were potentially created without authorization or tampered with.

After the news broke last fall that Wells Fargo employees had been systematically opening fake savings and credit accounts in order to meet unrealistic, corporate-set sales goals, then-CEO John Stumpf made an uncomfortable September visit to Congress to answer questions from members of the House and Senate’s finance and banking panels.

Appearing before the House Financial Services Committee in September 2016, Stumpf was subjected to a confrontational five-minute round of questioning by Rep. Keith Ellison that yielded few satisfactory answers for the congressman.

In late March, however — in response to follow-up questions submitted for the record in Stumpf’s hearing —  Ellison and other Democrats on the panel received more detailed information from the bank’s activities.

In total, Ellison submitted 68 questions for the bank to answer after the hearing had concluded. His questions cover a wide range of subjects, from how much those in various positions at the bank get paid to what steps the bank has taken to repay those affected by the sketchy sales practices.

In response to Ellison’s questions, Wells Fargo was able to reveal some information about how many Minnesotans were affected by its sales practices, customers and employees alike.

The firm PricewaterhouseCoopers analyzed 82 million Wells Fargo deposit accounts and 11 million credit card accounts over a four-year period, from May 2011 to summer 2015. (In testimony, bank executives were vague as to when exactly fraudulent activity began.)

In response to a question from Ellison, PwC estimated that 14,848 credit card accounts in Minnesota were “potentially unauthorized,” and that 16,306 deposit accounts “potentially experienced simulated funding,” meaning that employees put in and took out funds to make it seem like the account was being used.

In an interview with MinnPost, Ellison said that the bank’s estimates could be conservative, and that more Minnesotans could have been affected. As is, though, “It’s stunning,” he said. “It undermines people’s trust in institutions like banks. We need people to trust banks.”

In case you need a refresher on what Wells Fargo did to warrant congressional hearings, a nine-figure fine, and a $110 million class action settlement, the problem was rooted in an overly aggressive sales culture that had come to dominate the bank.

Ideally, Wells Fargo wanted each customer household to have eight products with the bank, from credit cards to savings accounts. Former and current employees recounted facing termination if they didn’t meet those goals.

That created immense pressure for employees to sell additional financial products to customers, even if those customers did not want or need them. So employees opened additional accounts without customers’ knowledge or consent, and moved money around customers’ accounts to create the impression they were real. 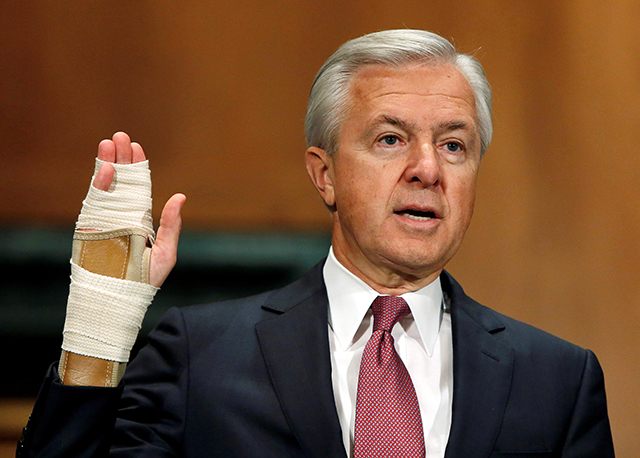 Wells’ ties to Minnesota go beyond the fact that it’s the dominant major U.S. bank in the state, with over 160 branches across Minnesota. Though based in San Francisco, it has had a large corporate presence here since 1998, when it merged with Norwest Corp. The tallest building in St. Paul, and the third-tallest in Minneapolis, bear the Wells Fargo name.

Many top Wells Fargo executives, like Stumpf, are Minnesotans, and the bank’s culture since 1998 has more closely reflected Norwest’s Midwestern roots than Wells’ current California address. As the Star Tribune’s Lee Schaefer reminded when the scandal broke, the overselling of financial products originated as a Norwest tactic in the 1990s.

Though plenty of Ellison’s constituents are Wells Fargo customers or employees, banks behaving badly is a bread-and-butter topic for Ellison. But alleged corporate labor abuse — another favorite Ellison topic — constituted a big portion of the congressman’s questions for the bank.

Wells Fargo said that, out of the 5,300 employees it fired for sales-practices violations, 172 were in Minnesota. These firings, targeted at employees who opened unauthorized accounts or otherwise tampered with accounts, were touted as a sign that the bank was cleaning house in the wake of the scandal.

But Ellison pressed Wells Fargo for information on the number of employees who were fired for not meeting the bank’s sales goals — in other words, those who may not have engaged in the behavior that got the bank in such deep trouble. 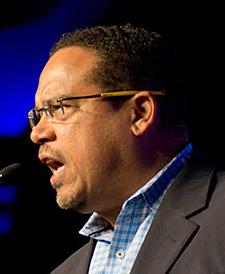 Wells Fargo said in response that it “cannot quantify with any degree of confidence… how many team members’ employments were terminated solely for not meeting sales goals.”

Ellison also asked how many employees submitted formal complaints about the perverse sales incentives, and how many of them got fired for doing so. Multiple former Wells Fargo employees have come forward claiming that they got fired after tipping off the bank’s human resources department about the shady activity they saw.

“Wells Fargo cannot quantify with any degree of confidence how many team members raised concerns to their managers about sales goals,” the response read. Regarding the stories that former employees shared about getting fired for blowing the whistle, or quitting, the bank said that “We are aware that certain former team members are making these allegations and we take them very seriously.”

The bank said it contracted with a third party to do a survey of 22,700 employees who quit in the four-year period. It found that 3,170 employees left Wells Fargo because of “dissatisfaction with supervisors.”

What we still don’t know

There’s still far from a full picture about what exactly went on inside Wells Fargo during the years in question, and how the bank will prevent the scandal from happening again. In a report released Monday, Wells Fargo put much of the blame on Stumpf and a top deputy, and moved to take back a combined $75 million in pay from both of them.

On at least one key issue, Ellison said Wells Fargo has indicated that it is not committed to meaningful change. His 27th question asked if the bank will support the formation of employee unions. It responded, “Wells Fargo does not believe our team members need a third party to represent them in matters involving terms and conditions of employment.”

Ellison told MinnPost that to prevent more abuse of customers and workers, there needs to be “a real worker voice, which means a union… They explicitly said in their response that they’re against a union.”

“If workers have a voice, when fraud goes on, workers will come forward if they have a bargaining agent,” Ellison said. “If they’re on their own, anyone who says anything is a whistleblower — and they already dumped some whistleblowers.”

Going forward, Ellison says he’d like to have more hearings to explore the issue and uncover more information, though that could be a tough lift for the House’s minority party after the shock of the scandal has faded.

Though Stumpf, the CEO who appeared before the committees, resigned his post in October, there are others worth questioning, Ellison said. “I want to see some people in decision-making roles be held accountable,” he said. “We’re looking for them to do something meaningful to help consumers out.”

Wells Fargo says it has refunded $3.2 million to some affected customers, and it may refund more as it assesses ways people were harmed by its actions — like lowered credit scores, for example. And the bank is continuing to settle with others, like whistleblowers, who sued.

Ellison and other progressives would like to see more systemic reforms — a prospect that he admits is growing dimmer. “As we get further away from the crisis,” he said, “I can’t see how they’re going to be much more committed to that process.”