There’s a handful of St. Paul DFL party members who are about to become very popular, at least with the four party candidates who’d like to become the city’s next mayor.

After the first weekend of the city’s DFL ward conventions — when three of the party’s seven wards distributed their delegates to June 17 city DFL convention — any path to a clean party endorsement will have to go through uncommitted delegates. “We’ll be knocking on their doors,” said Dai Thao of those delegates. “They’ll get tired of seeing us.”

Melvin Carter III, the former city council member and current advisor to Gov. Mark Dayton, can claim bragging rights for now. He won a total of 71 endorsements over the weekend, securing 19 of 55 delegates from the city’s northern Ward 5; 23 of the 67 delegates from his home Ward 1; and 29 of the 83 delegates from Ward 2. With those 71 of the 205 awarded so far — Wards 3,4,6 and 7 don’t hold their conventions until next weekend — Carter has the most delegates of the four candidates who are seeking the DFL endorsement, which includes current council member Dai Thao, former city council member Pat Harris and former school board member Tom Goldstein.

Second and third places so far are held by Harris, with 39 delegates, and Thao, with 35. Harris rode strong support from Somali voters in a single precinct in Ward 1 to help him win 13 delegates there, four from the 5th Ward and 22 from the 2nd. Thao won 14 delegates from his current Ward 1, seven more from the 5th and 14 from the 2nd. Goldstein got a total of five delegates.

“We feel good about it,” a happy Carter said at the conclusion of the Ward 1 convention at the Capitol Hill Gifted and Talented Magnet school, his alma mater.

It takes 60 percent of the delegates at the city convention to win the endorsement, so a candidate who doesn’t have that level of support has to hope that no other candidate can reach the threshold. Both Carter and Thao have pledged not to run if another candidate wins the endorsement for the office, which is technically nonpartisan. Harris said he will continue to run even if he doesn’t get the endorsement, while Goldstein said he is undecided on whether to continue if he doesn’t get the DFL’s imprimatur. (Also running for St. Paul mayor are two candidates not seeking the DFL endorsement: Green Party candidate Elizabeth Dickinson and Tim Holden, who has said he will run as an independent.) 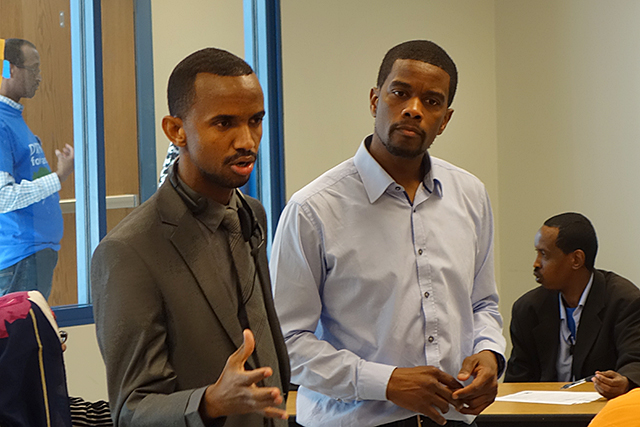 The totals for each of the candidates came from the sum of a small handful of different subcaucuses. Under the DFL rules, one way to elect candidates is with what are called walking subcaucuses. A delegate nominates a subcaucus that can be the name of a candidate a political issue or both. So Harris’ delegates in Ward 1 were a combination of support for “Harris Affordable Housing” and “Harris Serving Our Troops,” a reference to the organization Harris helped found, which travels the world to serve steak dinners to U.S. soldiers.

Thao’s walking subcaucuses were “Progressives for Dai” and “Dai Thao Equity,” while Carter’s delegates came from a single caucus in Ward 1, though he did well among subcaucuses in other wards focused on education. 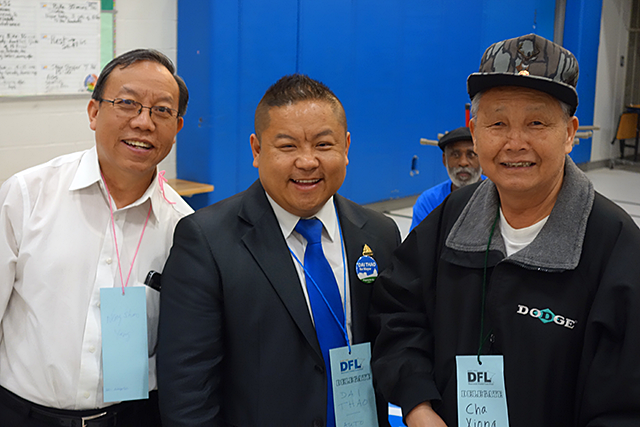 Where the endorsement fight goes from here

With four more ward conventions next weekend and the city convention six weeks beyond that, the campaign now becomes one of house-to-house combat for delegates. 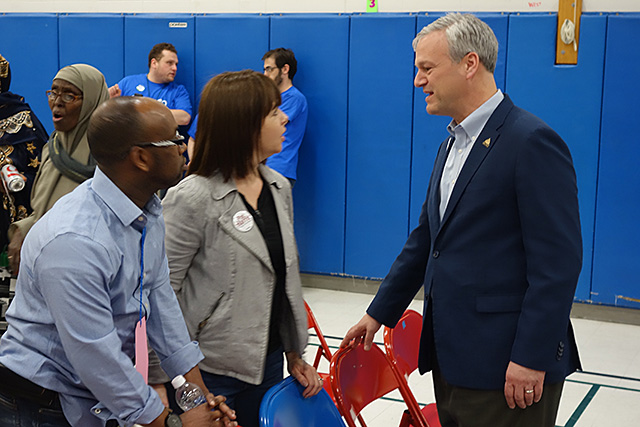 MinnPost photo by Peter Callaghan
Pat Harris, right, said he will continue to run even if he doesn’t get the endorsement.

Throughout the morning, the four mayoral campaigns were staffed by workers wearing different colored shirts, while the candidates made the rounds of all 17 caucuses for short speeches. In their speeches to delegates in Precinct 2, the candidates made an attempt to appeal to the many immigrants present.

“Would you rather have a soccer stadium in your neighborhood or soccer fields your kids can play on and a rec center open to your families,” said Goldstein. 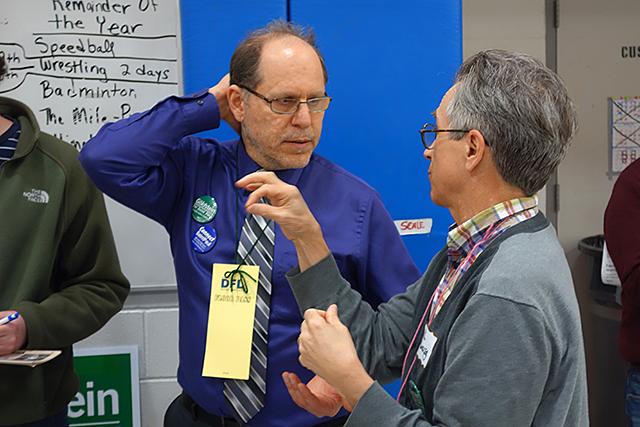 MinnPost photo by Peter Callaghan
Tom Goldstein, left, said he is undecided on whether to continue if he doesn’t get the DFL’s imprimatur.

Harris reminded attendees of his work on increasing the minimum wage for workers at the Minneapolis-St. Paul Airport, which he oversees as a member of the Metropolitan Airports Commission. Thao spoke of his own immigration experience, fleeing Laos in a migration that saw two sisters and a brother die. And Carter said he envisions a city that embraces its multi-ethnic residents to become a leader in the global economy.