Even 900 miles from the limits of its jurisdiction, the Metropolitan Council is still a favorite piñata for politicians — with plenty of political candy to go around if you bash it right.

In Washington, one of freshman Rep. Jason Lewis’ first legislative moves was to introduce a bill that he claims will limit the power and scope of the Met Council, the Twin Cities metro area planning organization that is a bogeyman for conservative Republicans like Lewis. (And even some Democrats.)

Lewis’ bill would overturn an obscure, 11th-hour rule from Barack Obama’s administration regarding metropolitan planning organizations, or MPOs, of which the Met Council is one of about 400 around the U.S.

That regulation, written by U.S. Department of Transportation officials, requires one MPO to cover the boundaries of an entire urban area. In other words, it aims to consolidate multiple organizations that might be working in one metro area into a single entity, or get them to change their boundaries so as to reduce overlap.

Lewis argues that his bill, which has bipartisan backing and has passed out of his Transportation and Infrastructure Committee, will wrest back decisionmaking control from big regional agencies like the Met Council and return it to smaller, local ones.

That might hold true in other regions. Inside the Met Council’s jurisdiction, however, there are doubts whether Lewis’ bill will have much of an impact at all — that is, beyond politics.

Changing the rules for MPOs

The feds’ rule, officially called the Metropolitan Planning Organization Coordination and Planning Area Reform, had been in the works for months, but was made official on January 19, 2017 — the last full day of the Obama administration.

The twilight of the outgoing presidential administration was jam-packed with the finalization of federal regulations on key topics like environmental protection, which Republicans in the White House and Congress now anxiously aim to roll back.

The Department of Transportation rule targeted by Lewis, however, is not so high-profile. It aims to standardize and streamline the way that planning decisions are made in metro areas around the country — a seemingly uncontroversial aim.

Many urban areas of varying sizes have MPOs, from Mankato — whose MPO covers about 60,000 people — to the greater Los Angeles metro area, whose Southern California Association of Governments makes planning decisions for roughly 18 million people.

In some metro areas, though, MPOs do overlap. In Chicago, for example, the metro area is considered by the feds to include the city of Chicago and its Illinois suburbs, along with two counties in northwest Indiana and two counties in southeastern Wisconsin. There are three MPOs, total, operating in the Chicago metro area as the federal government sees it.

In the eyes of the U.S. DoT, a situation like Chicago’s is inefficient. Under their rule, one MPO would be responsible for coordinating planning decisions for the entire Chicago area, as well as the towns and cities expected to become part of the metro area within 20 years, something determined by the U.S. Census.

“The MPOs may need to adjust their boundaries, consider mergers, or, if there are multiple MPOs designated within a single [metro area], coordinate with the other MPOs to create unified planning products for the [metro area],” the DoT states in its summary of the rule.

The rule, DoT added, will promote “unified decision-making… and better-coordinated regional decisionmaking so that the affected MPOs speak with ‘one voice’ about the area’s transportation needs and priorities.”

Plenty disagreed, though: in the public commentary period for DoT’s rule, more than half of responses the agency got were in opposition.

Lewis’ bill simply aims to overturn the DoT’s rule. The motivation for doing so is clear-cut for Lewis’ co-sponsor, Rep. Dan Lipinski, a Chicago-area Democrat who is not in favor of consolidating his region’s planning authorities.

Overturning the rule, though, will have virtually no effect on Lewis’ constituents, or anyone in the Twin Cities metro area.

The Metropolitan Council, headquartered in St. Paul, is the only regional planning game in town for the Twin Cities. The state government has invested in the Met Council significant authority to make planning decisions — and to tax — in the seven counties in and around Minneapolis and St. Paul, which officially constitute the metro area.

After the 2010 Census, which included parts of Wright and Sherburne Counties as part of the metro, the Met Council signed agreements with municipal governments there to nominally include them in the council’s jurisdiction in order to meet federal requirements. (That census also designated the city of Hudson, Wisconsin, across the river from Minnesota, as part of the Twin Cities metro, too.)

Though those places are outside the seven-county metro, Met Council says it doesn’t have authority to do much of anything there unless the legislature gives it the authority, and that current activity in these places is limited to some transportation planning and federal transportation funding allocation.

Frank Douma, an urban planning expert at the University of Minnesota, said that the bottom line is that the DoT rule “would not have an impact on the way that planning is done in the Twin Cities.” 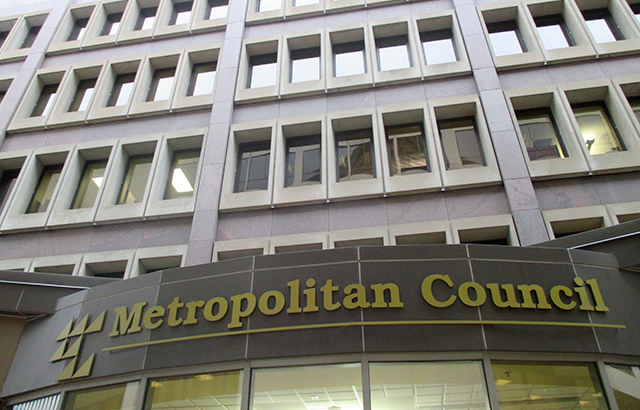 MinnPost photo by Peter Callaghan
The state government has invested in the Met Council significant authority to make planning decisions — and to tax — in the seven counties in and around Minneapolis and St. Paul.

So why is Lewis working to overturn the rule, then? In a press release, Lewis claimed that his bill would halt the expansion of the Met Council.

“Under the rule the Met Council, [an] MPO, could have expanded their boundaries and taxed the suburbs to help fund downtown projects,” he said. “We’re protecting the ability of local decision makers to do what works for their own communities.”

But that claim is misleading: While it’s true that the Met Council could have been required to expand its boundaries further to comply with the feds, what it does within those boundaries is entirely up to the state legislature.

In other words, if state lawmakers did not want to extend taxation authority to new areas of the planning area, they wouldn’t have to. (The Met Council’s combination of responsibilities and powers, as MinnPost’s Peter Callaghan has pointed out, makes it a unique beast in the ecosystem of U.S. regional planners.)

Passing Lewis’ bill also wouldn’t stop the Met Council from pursuing continued expansion if it wanted to. The power to invest authority in the council rests with St. Paul, not Washington, and there’s already plenty of resistance there to Met Council expansion.

“It has no taxing authority outside the seven-county metro region and is not expanding into other counties. The Council functions as the region’s federally designated Metropolitan Planning Organization and will continue to do so in whatever way federal law defines the boundaries of an MPO.”

However, the Association of Metropolitan Planning Organizations, of which the Met Council is a member, supports Lewis’ bill, saying that the DoT rule would be impractical to implement.

So if the bill won’t do much for the Twin Cities, why is Lewis bothering with it?

On a basic level, it’s in step with Lewis’ libertarian-leaning political philosophy. He argues that governments will grow if they are given space to, and he’d rather not take his chances with this federal rule, even if it’s unclear if or how it would make the Met Council bigger and badder.

Lewis acknowledged that his claim that the DoT rule would pave the way for an easy expansion of the Met Council’s taxation regime was a stretch. “Politicians make press releases sound as good as they can, I get that,” he said.

But he maintained his bill accomplishes important goals. “If what we did is window dressing,” he asked, “then why did the Obama administration do a lame-duck rule?”

Ultimately, for Lewis — who bashed the Met Council and the Southwest light rail project as a candidate — hammering the Met Council pinata is simply good politics in his largely suburban south-metro district. (This could also become his first real legislative achievement: a version of the bill has passed in the U.S. Senate, and after a likely passage in the House, Lewis’ bill would head to the White House.)

“It’s a matter of reining in some of these regional governments and restoring local government in its more traditional way… It’s not going to stop Southwest light rail,” he admitted. “I’m working on that.”

“I think there was enough danger with the Obama last-minute rule to grease the skids… the Met Council becomes bigger, you’re going to have more Southwest LRT, more tax dollars devoted to regional government,” he said.  “I wanted to stop it if I could.”

Others see it differently. “As far as I can tell,” the U of M’s Douma said, “if the law is passed so that the rule can’t go into effect, it’s all back to business as usual.”

The first shot in Rep. Jason Lewis’ war on the Met Council may fall a little wide of the target