Minneapolis has its first woonerf. Or does it?

For those who aren’t on a planning commission or land-use groupies: A woonerf is a Dutch import that translates as “living street” (sometimes “living yard”) and is a hot topic in urban design and planning these days. It describes a mixed-use street or alleyway that is shared by cars, bicyclists and pedestrians — but without the strict delineation of traditional roads: sidewalks, bike lanes, traffic lanes, etc. — as a way to use limited space for multiple functions.

“For residents of a woonerf, the public space in front of their homes is a place to play, socialize, and, engage in the community,” noted the byDesign blog.

When it comes to Minneapolis’ first woonerf, however, it might be hard to envision such an idyllic scene. The path cuts diagonally between two new residential buildings — the affordable-housing apartment building Mill City Quarter and the market-rate senior apartments Abiitan Mill City — on South Second Street in downtown Minneapolis. And the new space is devoted, mostly, to 80 head-in parking stalls.

“Today it’s probably best characterized as a nice parking lot, a REALLY nice parking lot,” said Michael Schroeder, the assistant superintendent for planning at the Minneapolis Park and Recreation Board, which has signed off on the woonerf as part of the land deal governing the development.

All of which has raised the question: Is Minneapolis’ first woonerf woonerf-y enough to actually be called a woonerf?

Not an easy project

The woonerf was the result of complex land deal that sought to develop two large and rather ugly city-owned parking lots that were separated by an old Minnesota and Eastern Railroad right-of-way. The city would sell the parking lots for new projects, but it wasn’t going to help with details like:

In that context, it might not be a surprise that only two developers responded to the city’s request for proposals. “We look at ourselves as problem solvers,” said Steve Minn, one half of the team, along with John Wall, who won the right to develop the property.

One of those problems was that the owners of Mill Place wanted to retain a roadway to the buildings — and wanted day parking along the way. So Minn said he and Wall arrived at an idea that was, at the time, novel: a woonerf. 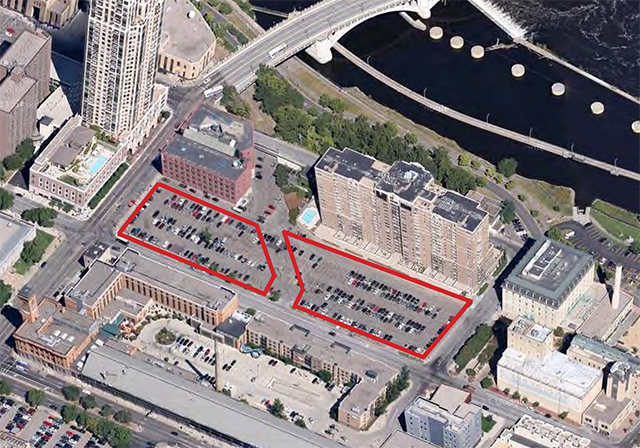 BKV Group
An aerial view of the proposed woonerf location.

The developers wouldn’t own it, but they would pay to improve it. They negotiated a deal to put storm water functions beneath the passageway, head-in parking on the surface and to deed a perpetual easement to the Minneapolis Park Board for bikes and pedestrians.

The designs of both of the properties on the site take advantage of the woonerf. In fact, Abiitan — a senior complex that includes both independent living apartments and memory care — has dining space as well as a public restaurant facing the woonerf.

In 2015, the woonerf plan was presented to the park board. The board was involved because the developers applied for and received an exception to laws that require new projects to pay a park dedication fee, money that’s used to help pay for parks and open spaces in the vicinity of developments. Under the exemption, Minn and Wall would develop park space themselves and make it available to the public in lieu of the dedication fee.

At the time, park board staff raised concerns about the design, specifically citing the “balance of space dedicated to automobiles,” and requested that the developer to show how “non-vehicle movements” would be “safe, clear and logical. ”

There were other problems: Pedestrian areas outside the parking stalls and tree-planting areas were not part of the perpetual dedication, which meant that public access could be cut off in the future. And once the woonerf passes north of the two new buildings, the pedestrian paths ended, meaning everybody — walkers, bikers, drivers, unicyclists — would share the same space. As a result, parks staff reported, “the intended balance of movements typical of a woonerf and demonstrated in a ‘landscaping visioning’ drawing prepared by the developer is not achieved.”

Another point of contention was the presence of a large gate beneath First Street South and signage directing people to the waterfront and the future Waterworks Park, which is likely to take several years. The gate will remain closed and locked until the pathway and the park is completed. Even then, the gate will only be open during general park hours: 6 a.m. until 10 p.m.

Yet park board staff recommended a yes vote, for two primary reasons. One is that the amount of park fees that would have been collected from the development were relatively small: $65,000. The other reason is that the woonerf will provide a path for walkers and bikers from downtown to the to Waterworks Park, along the Missisissppi, which is expected to be completed over the next several years. 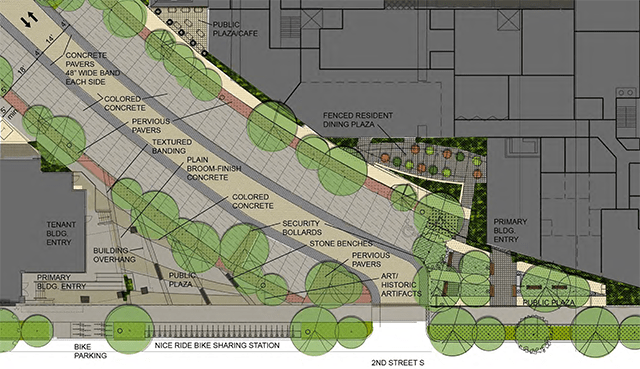 BKV Group
The project has attracted grants, including a sustainable development grant from the Met Council.

“We may not have the design that we wanted, but the ability of people to move from the Mill District to the riverfront was really important,” Schroeder said. “It’s a long block of land with no other way to penetrate through.”

“That can’t be overstated,” Schroeder said. “The value of the connections is significantly greater than what the fee would have been.”

The park board voted 6-1 to approve the project. The only no vote on the resolution approving the waiver of the park dedication fee was park Commissioner Brad Bourn.

“I have no problem with the concept,” Bourn said. “And it’s a vote that I hope I wind up being wrong on.” But there were several provisions that “did not meet my threshold — and what I think would be a reasonable person’s threshold — of public use.”

For example, he asked, would demonstrators be free to have a rally in the woonerf as they could in a park? The board’s legal counsel said they could be removed.

He also balked when he heard Minn say the gate would be necessary to keep the “bums” out. “We don’t build fences to keep homeless and highly mobile people out of our parks right now,” Bourn said. “Parks are for everyone and people have a right to be there.”

Minn expressed some frustration in dealing with the park board that, he said, “has a reputation for second-guessing everything.” He and the other developers were very cautious in dealing with the board and tried to have as much of the agreements and understandings in writing as they could.

In the end, however, Minn estimates that the improvements made to the site in building the woonerf are worth $400,000, well above the $65,000 that would have been owed to the park board had the developers simply paid the dedication fee.

The project even attracted grants, including a sustainable development grant from the Met Council. And there are improvements yet to be added, including catenary “festival” lights that will strung over the woonerf, and a Nice Ride station at the Second Street entrance.

Minn also said there will be additional historic displays telling the story of the railroad history of the area. “A year from now, with the lighting and connections, people will feel better about the design,” Minn said. 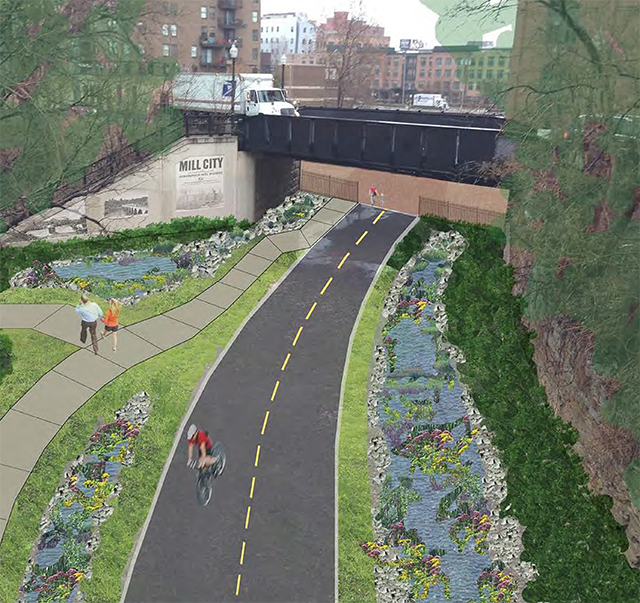 One who doesn’t need convincing of the benefits is Minneapolis City Council Member Lisa Goodman, an early supporter of the project. The developers, she said, were called on to fix a bad land use decision made by the city nearly two decades ago: long-term leases for city owned surface parking lots that prevented redevelopment.

She also said it is important for the city and developers to find paths in the midst of some of downtown’s double-block, 300-foot-long building sites. To her, this project shows how that can be done.

As to the parking on the woonerf, Goodman said she thinks that will change over time as people who live and work downtown have less need for cars and places to park them. “Parking becomes a horrible but necessary land use but that will change over time,” Goodman said. “The next generation of people who plan cities can work in an atmosphere where cars are not so sacrosanct.”

As to the end result, Goodman compares a massive surface parking lot “to two beautiful buildings with some cars parked on a public pass-through.”

“It’s a success,” she said. “If we had done nothing, we’d still be looking at a 400-car surface parking lot. Don’t let the great get in the way of the good.”