Rejecting the counsel of the city’s planning staff, the Minneapolis Planning Commission has recommended approval of a comprehensive plan amendment that would allow an incursion of residential development into an area of southeast Minneapolis currently set aside for industrial uses.

By a 7-1 vote, the commission on Monday sided with a request by developers John Wall and Jeffrey Barnhart to recommend carving out 9.4 acres from the Southeast Minneapolis Industrial Area in the city’s Prospect Park neighborhood. The move will trigger a set of land use requests that would allow development of a residential tower and food hall near the United Crushers grain elevator and the Surly Brewery.

The recommendation would have to be approved by the Minneapolis City Council’s zoning committee and the full council before being sent to the Metropolitan Council for review. If successful there, the developers could return to the city with a detailed proposal and a request to rezone the land just north of the University of Minnesota’s transitway, which connects the school’s Minneapolis and St. Paul campuses.

“This is a legacy project,” said Barnhart. “I’m trying to do something amazing.” Only nine of the 21 acres owned by Wall would be open for residential use. The rest would be developed under industrial zoning.

But Barnhart called the residential tower and food hall the core of the plan, saying it is needed to help pay for needed road and infrastructure improvements as well as green space and district stormwater sharing. “I convinced John Wall this was a good idea,” Barnhart said. “So if it flops, you can blame me.”

Though there was no community opposition — the Prospect Park Neighborhood Association is a major supporter of the move — the issue was important enough for city staff that it advocated for a rejection of the comp plan amendment. In a staff report, planners from the Minneapolis community planning and economic development department said that preserving land for future industrial uses is part of the city’s adopted land use policies as well as the comprehensive plan.

There is a worry that land available for industrial uses in the city is declining — that most of the land currently zoned for industrial use is not in play because it is either owned by the railroads, is polluted or is chopped up into undesirable parcels.

Planners felt that if the council wants to review those plans it should be part of the pending top-to-bottom review of the city’s comprehensive plan, which is supposed to guide the city’s policy decisions on land use. “It’s not about what might happen at the site eventually,” Beth Elliott, a principal project coordinator for the community planning and economic development department, told the commission. “It’s whether it is in the best interest of the city.”

Among the staff conclusions were that: “The proposed change would not be consistent with the Comprehensive Plan goals and policies, and would be premature given that critical conversation and analysis are currently underway regarding employment and employment disparities as part of the citywide Comprehensive Plan update.”

“Under the policies of the current Comprehensive Plan, which have been reaffirmed multiple times, it is not in the City’s interest for redevelopment of this land to be used for uses other than industrial or office,” the department found. 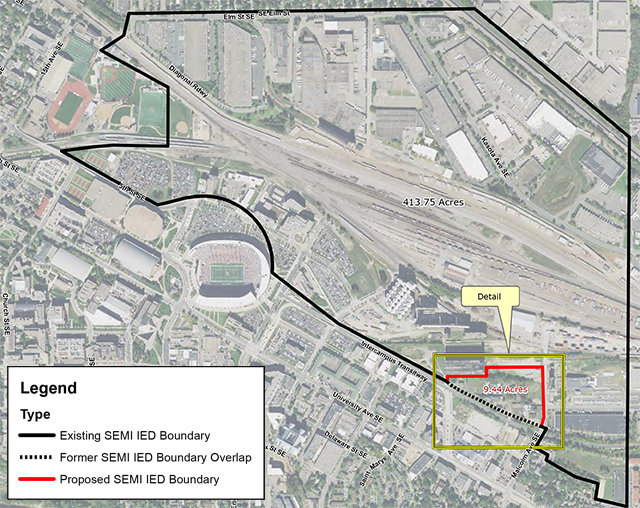 City of Minneapolis
The John Wall owned property subject to this week’s planning commission vote is at the lower-left corner of the South East Minneapolis Industrial area.

Jack Byers, the planning manager for the city, said industrial land makes up less than 4 percent of the city’s 54 square miles, and much of that is owned by the railroads.

“If you take all of that existing land owned by those railroads and take that out of the mix you are really left with something much, much smaller,” Byers said. “The calls that we always get from our colleagues in CPED economic development is they are working with folks who want to move into the city, to bring jobs into the city and they can’t find tracks of land large enough.”

Commissioners were sympathetic to the planning staff’s concerns, but a majority also felt the Met Council’s schedule for comp plan reviews allowed for an amendment of the existing plan. Other findings were that the area involved was not likely to draw industrial uses, that it is adjacent to a light rail station and has seen extensive residential and retail development since the current plan was approved more than a decade ago.

“The staff made a very strong case for not changing the designation of this area,” said commission president Matthew Brown. But he also noted the changes in the area, the most significant being construction of the Green Line and the location of the Prospect Park station, and the call for higher density development near transit stations in the city’s current comprehensive plan.

Brown said he was interested in the historic preservation potential of the Harris Building, the location for the proposed food hall. Finally, Brown said needed roads and other infrastructure are not likely to be paid for by the city and are more likely funded by developers as part of higher-density development.

No interest in original plan for site

The University of Minnesota Transitway forms the boundary between land uses in the area. To the south, residential uses are permitted, and the number of new apartment buildings there is evidence of that. The city is promoting those uses with a street redo called Green 4th Street, which will run from Malcolm Avenue to 25th Avenue SE.

But north of the busway, no residential use is permitted. That’s why the developer asked for an amendment to the comprehensive plan.

The details of the development were not at issue before the commission. They will come if the comp plan amendment is approved and the developer returns for a rezone and plan approval. But the amendment request did contain some information about what might be built, including a 12-story apartment tower, some commercial space as well as the possible rehabilitation of an old industrial structure known as the Harris Building. Badly damaged by a fire in early 2016, the brick building could become a food hall, perhaps including a craft distillery, restaurant vendors, bakers, wine sellers and produce markets. 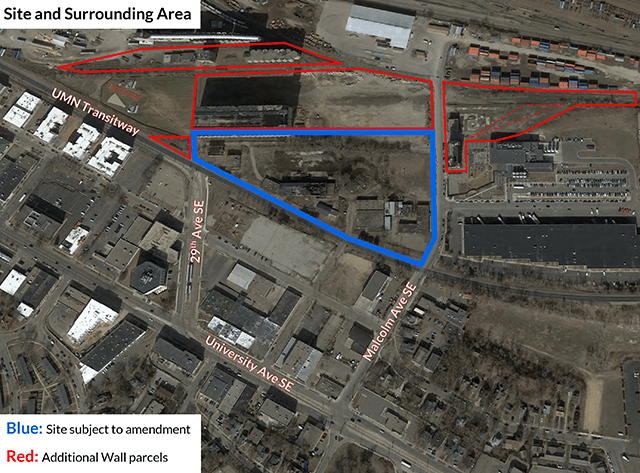 City of Minneapolis
Residential buildings would be permitted in the property outlined in blue under an action taken this week by the Minneapolis Planning Commission.

Wall told the commission he has been trying for nearly two decades to fulfill his original dream for the property, a research park associated with the University of Minnesota. The idea was to have spaces were innovations crafted at the university could be incubated into marketable products.

He was unable to find interest, including from the university. As his comp plan amendment application put it: “The market simply does not demand what the decade-old land use guidance calls for.”

Wall said he resisted trying to develop the area for uses such as single-level warehousing and equipment storage. “We believe this will bring more jobs and more tax base than the industrial zoning.”

The plan was backed by the Prospect Park Neighborhood Association, which has expressed excitement about some of the features that could be included in the development.  “The opportunity is now and we don’t want to miss this,” said Richard Gilyard, an architect and active member of the neighborhood association and many other planning groups in the area.

U of M concerns

Any development like that envisioned by Wall and Barnhart would need additional roadways and pedestrian crossings of the U of M transitway. Currently, the only crossing is at Malcolm Avenue SE, a passing familiar to visitors of the Surly Brewery.

Monique MacKenzie, director of planning for the U of M, told the planning commission the university is concerned about safety along the transitway, and said there is a need for careful planning of additional crossings.

Currently, buses travel every five minutes in both directions to take students and staff between the Minneapolis and St. Paul campuses, and travel at speeds of up to 40 mph.

The addition of more cars, bikes and pedestrians as development increases north of the transitway will increase conflicts with buses, she said. “We have one to two near misses a week between our transit drivers and somebody, either in a vehicle, on a bicycle or on foot,” she said.

To address the issue, the U of M wants a signal at Malcolm. And while an additional crossing is needed, school officials would prefer that it to be close to TCF Bank Stadium.