For all the talk of how hard Minneapolis mayoral candidates worked to get their supporters to attend DFL precinct caucuses Tuesday, they apparently didn’t work as hard as “uncommitted.”

At least that was the case at the Ward 7, precinct 5 gathering, where around 60 self-declared adherents to the DFL met to decide who would attend upcoming ward and citywide conventions. In fact, inside Emerson Elementary School near Loring Park, where several of the city’s 130-odd precinct gatherings were being held, various iterations of “undecided” carried the evening.

In precinct 5, for example, as with two other caucuses in the same building, there was little competition for the slots to the DFL’s Ward 7 convention. That’s because each was allotted more delegate slots than there were people interested in spending an upcoming Saturday at a party meeting, even if a significant decision will be made at that gathering — whether to endorse incumbent City Council Member Lisa Goodman or challenger Janne Flisrand.

In fact, there was more competition for the much-fewer delegate seats to the city convention, on July 8, where the critical mayoral endorsement will be determined. If any of the declared DFL candidates can win a supermajority of delegates — and therefore a clean party endorsement — at that meeting, they will have a clear advantage in November.

As a result, the Ward 7, precinct 5 caucus-goers triggered a provision in DFL rules that must have puzzled first-timers: the “walking subcaucus,” something that otherwise would make a great name for a trivia team, but in this instance involved attendees having to declare a preference for both a candidate’s name and an issue. 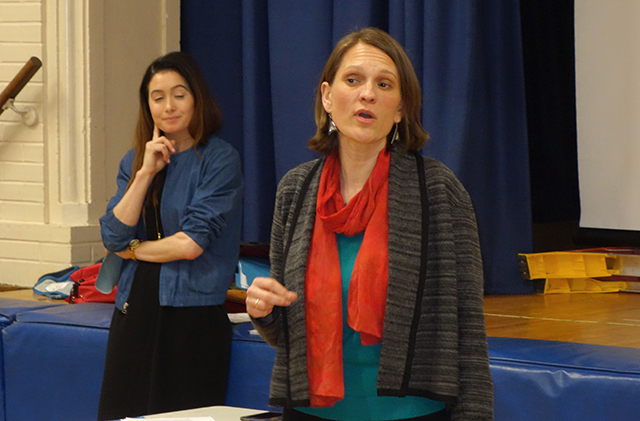 MinnPost photo by Peter Callaghan
Goodman challenger Janne Flisrand: “When I look at city hall, I don’t always see the vision and values that we share and that needs to change.”

And then things got really tricky. Based on the formulas crafted by the party, subcaucuses in precinct 5 needed to have at least five members to be “viable,” that is, to have enough to qualify for a single delegates. After some serious work on the calculators, the caucus conveners determined that “uncommitted equity now” had five delegates, Frey had three, Hodges had two, Dehn had one and “uncommitted strong neighborhoods” had one. The final delegate was determined by a coin toss between Dehn and “equity now.” “Equity now” prevailed.

What does it all mean? That of the 13 delegates to the city convention from Ward 7, precinct 5, only six will go committed to a mayoral candidate.

‘No haters’ or an antiquated process?

Both Goodman and Flisrand made appearances at the four Emerson school caucuses, and both had a campaign presence. Supporters wore T-shirts and buttons, though no stickers, which weren’t allowed at the school due to the propensity of them ending up stuck to hallway and gym floors.

Flisrand said that she wanted the council be more progressive to match the politics of the city. “I love living in this city,” Flisrand said, “But when I look at city hall, I don’t always see the vision and values that we share, and that needs to change.”

But Goodman, completing her 20th year on the council, appeared to have greater numbers, and in her remarks at Emerson, spoke of her accomplishments — and made an appeal to unite DFL factions. “In the end, we’re all various colors of Democrat,” she said. “The enemy is the Trump administration.” And later: “I know who the enemy is and it is not us,” she said. “There are no haters in this room.”

But not everyone is enthusiastic about the DFL’s process. Earlier in the day, two candidates — one for mayor and one for City Council — announced that they would not seek a DFL endorsement and would take their campaigns directly to voters in November. 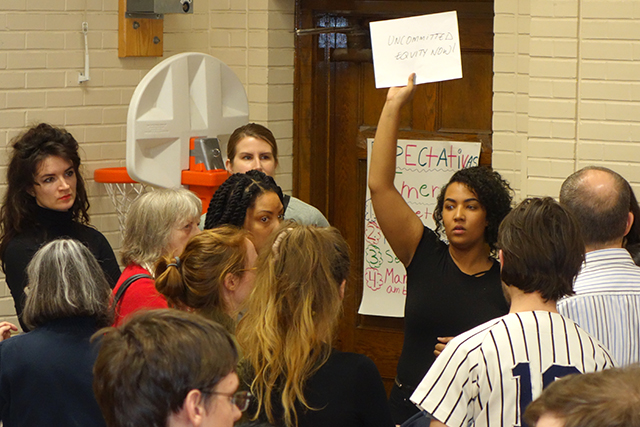 MinnPost photo by Peter Callaghan
After some serious work on the calculators, the caucus conveners determined that “uncommitted equity now” had five delegates, Frey had three, Hodges had two, Dehn had one and “uncommitted strong neighborhoods” had one.

Both Nekima Levy-Pounds and Raeisha Williams said they consider themselves members of the DFL and have taken part in caucuses and party conventions in the past. Levy-Pounds, however, she said she now considers the local and state DFL to be part of the status quo, and that it isn’t open to candidates of color, especially women candidates of color.

Levy-Pounds, a former professor of law at the University of St. Thomas and former president of the Minneapolis NAACP, also said that with the city adopting ranked choice voting, the endorsement process is antiquated. Rather than have a few thousand DFL activists decide who should have an advantage in the election, voters should make that choice.

“We are tired of the status quo that we have seen reflected in the DFL Party,” Levy-Pounds said. “We have no faith in the DFL endorsement process.”

“We’re talking about a process that includes maybe 4,000 people that controls who makes it to November,” said Levy-Pounds. But with ranked choice voting, in which voters rank their first, second and third choices, the DFL system of trying to send just one candidate onto the ballot is antiquated.

That system, she said, is not only protective of the status quo “but isolates women of color who seek political office.”

“Why have we only had one mayor of color,” Levy-Pounds asked. “That has to do with our white liberal majority not necessarily embracing competent, qualified people of color.” 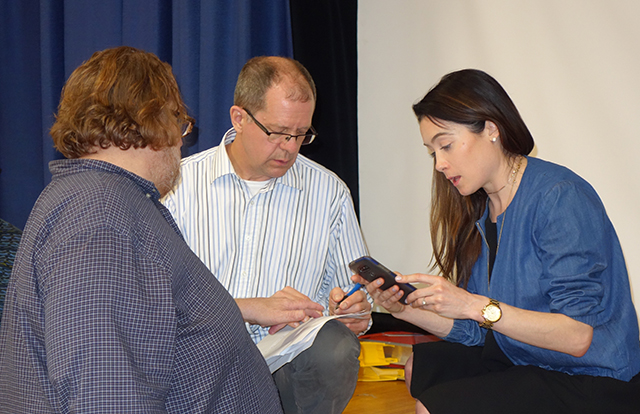 She said she came to her conclusions after exploring the process and attempting to work within that system. Many who make endorsements that are influential within the party, including some labor unions, are enforcing the status quo.

Williams, who is a candidate for the council’s Ward 5 position, also took issue with the caucus process. A former communications director for the NAACP, she is running against incumbent Blong Yang and another challenger, Jeremiah Ellison. “I have chosen not to run as a DFL-endorsed candidate because I do not believe the process is inclusive and have the voices of everyone in North Minneapolis. I want it to be decided by the people of North Minneapolis.”